The president of the federal Conservatives says the party is reviewing all internal policies in the wake of sexual misconduct allegations against former MPs.

Scott Lamb says the review is on top of a promised third-party investigation into how one, Rick Dykstra, remained a candidate in 2015 despite senior party officials knowing he'd been accused of sexual assault.

Dykstra has denied the allegations, which have not been tested in court nor independently confirmed by The Canadian Press.

Lamb wouldn't comment on whether that investigation has officially begun or whether there is a timeline for its completion.

Scheer has pledged to make the results public.

Lamb, a Vancouver-based lawyer, became party president in 2016 and was not involved in the 2015 campaign conversations about Dykstra.

He said while the party felt it had strong policies in place on issues like workplace harassment, it wanted to go further after the allegations came to light.

"When you see what's going on, you want to go back and say: 'Are we missing something, is there something we can do better?"' Lamb said in a brief interview on the sidelines of a conservative conference in Ottawa Saturday.

The party has already updated its candidate questionnaire to add an explicit question on whether a would-be MP has ever been accused of sexual misconduct.

Lamb said while existing questions on the form might have covered that issue, a more forthright approach is required.

"We need to not take any possible chances. We have to be direct – not let anybody off the hook on this," he said.

Over the weekend, Scheer attended the annual general meeting of the Nova Scotia Progressive Conservatives, whose leader resigned ahead of schedule after an internal investigation into inappropriate behaviour.

Scheer said he would leave it to the provincial party to address the allegations, but believed everyone is working to make political life safer.

"I really do get the sense that there's goodwill between all the different types of parties, both federally and provincially, to come up with processes to make sure that workplaces are safe."

The Ontario Progressive Conservatives are in the midst of a leadership race also forced by the resignation of their leader after allegations of sexual misconduct.

Patrick Brown has repeatedly denied the accusations, including in a detailed Facebook posting on Sunday, in which he described the allegations as false.

The accusations date back to his time as a federal MP. They have not been verified by The Canadian Press, and in a recent interview with Postmedia, he said he was considering legal action.

Ontario PC leadership candidate Christine Elliott said over the weekend she thinks it is important for Brown's side of the story to come out.

"But that has to happen before, in my opinion, he should be able to run."

Scheer has said any candidate accused of sexual misconduct would not be allowed to run for the Tories while he is leader.

Federal New Democrats have also been grappling with allegations of misconduct – both sexual and non-sexual – by current and former MPs.

The party revealed over the weekend that it has set Feb. 20 as the deadline for anyone to bring forward specific allegations against Erin Weir.

The Saskatchewan MP was suspended from his duties in caucus after fellow NDP MP Christine Moore said she had heard complaints from several female staff that Weir harassed them.

An NDP spokeswoman would not say Sunday whether any complaints had been received yet; Moore has said she did not personally experience anything untoward from Weir.

Meanwhile, the Chronicle Herald reported over the weekend that another woman had come forward with allegations of inappropriate behaviour by former Halifax-area NDP MP Peter Stoffer.

The woman, who asked not to be identified, reportedly told the newspaper that Stoffer made several sexual comments to her when she was working for the party in the early 2000s.

Stoffer, who served as a Nova Scotia MP from 1997 to 2015, specifically denied during a news conference on Friday that he ever sexually assaulted or physically abused anyone.

However, he admitted that his actions as a "touchy" and "very gregarious, fun-going person" may have led to behaviour that was perceived as inappropriate. Patrick Brown says he can disprove sexual-misconduct allegations against him
February 11, 2018 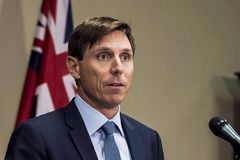 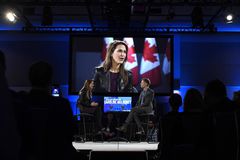