Ethics Commissioner Mary Dawson is calling on Parliament to bring in tougher fundraising laws that would address cases of ministers selling access for party donations.

Pointing to four cases involving the new Liberal government, Ms. Dawson questioned their appropriateness even though they did not breach the Conflict of Interest Act.

In what may be her final annual report given that her term expires in July, Ms. Dawson also revealed that her office has resumed its investigation of the $90,000 payment Senator Mike Duffy received from Nigel Wright, the former chief of staff to then-prime minister Stephen Harper.

"Fundraising activities in which a relatively small number of attendees, in exchange for the price of admission to an event, gain the opportunity to meet a featured minister or party leader have been characterized as 'selling access.' This situation is not directly addressed in the act," Ms. Dawson stated in her report.

"Clearly, if a minister or parliamentary secretary organizes a fundraiser, it would be inappropriate to use his or her government position to do so," she said.

"It would also be inappropriate to target stakeholders who wish to find favour from the minister or parliamentary secretary. While all four instances referred to above raised questions about the appropriateness of the way the fundraisers were organized, it was never clear that there was a contravention of the act."

Recent examples cited in the report include a December, 2015, fundraising letter from Finance Minister Bill Morneau that offered a chance to win a dinner with the minister in exchange for a donation. The offer was later cancelled. Also in December, Liberal donors were given a chance to "meet and mingle" with cabinet ministers and Liberal MPs at a holiday caucus dinner. Another case involved a fundraising e-mail that offered a chance to win a trip to Washington, D.C., to attend events during Prime Minister Justin Trudeau's visit. The fourth case involved a fundraiser hosted by a Toronto law firm that featured Justice Minister Jody Wilson-Raybould.

For years, political parties have used their brightest stars to sell tickets to fundraising dinners and other events across the country. But attention has recently focused on a trend toward more intimate events, with a smaller number of guests that guarantee participants would have an opportunity to bend the ear of a powerful political figure.

Questions related to potential conflicts of interest arise when the participants include lobbyists or other individuals who potentially stand to gain financially from government decisions.

Many high-profile cases involving these intimate fundraisers have taken place at the provincial level. The Globe and Mail has reported on events of this nature in both Ontario and British Columbia. In Ontario, fundraisers organized by the provincial Liberal Party granted access to Premier Kathleen Wynne and various provincial ministers. The Ontario government subsequently brought in sweeping reforms to political financing laws. The reforms will ban donations from corporations and unions, reflecting restrictions that are already in place for federal parties.

In British Columbia, Premier Christy Clark has also faced criticism for participating in similar fundraisers but has resisted calls for campaign-finance reform. Ms. Clark has insisted that such events are acceptable as long as the details are promptly disclosed to the public.

Federally, the Ethics Commissioner noted that she has been calling for improvements to the Conflict of Interest Act for several years to no avail.

Treasury Board President Scott Brison said the government "appreciates her advice," but he did not make any pledge to update federal ethics laws.

"We take ethics seriously. Our government has and will continue to maintain the highest level of ethical standard," he said.

However, Ms. Dawson noted that while she uses the guide to provide advice to MPs and ministers, it is the Privy Council Office that is responsible for administering those rules.

The Ethics Commissioner's office had suspended its investigation of the Wright-Duffy payment in June of 2013 because the issue had become a criminal matter. Mr. Duffy was cleared of all charges against him in April.

During the trial, Mr. Wright testified that he believed he was doing a "good deed" by providing personal funds to Mr. Duffy so that he could pay back questionable expenses that had been billed to taxpayers.

Mr. Wright came to politics as a wealthy and highly successful businessman with Onex, a private equity firm, where he reportedly received a seven-figure salary. Mr. Wright has since returned to Onex, where he is a managing director in London.

Should the commissioner's investigation conclude that Mr. Wright's actions were in violation of the Conflict of Interest Act, the office does not have the power to impose a financial penalty. The Act does allow for penalties of up to $500, but only for administrative violations such as for failing to file required documents with the office.

NDP MP Alexandre Boulerice said the commissioner has no teeth and that the watchdog's powers should be strengthened in law.

Editor's note: an earlier version of this story stated incorrectly that should the ethics commissioner's office conclude that Nigel Wright's actions in relation to Senator Mike Duffy were in violation of the Conflict of Interest Act, the office has the power to impose an administrative penalty of up to $500. In fact, the commissioner may only impose administrative monetary policies for failures to meet certain reporting requirements of the Act and not for breaches of its substantive provisions. 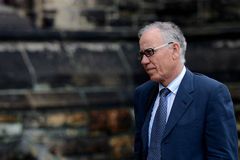 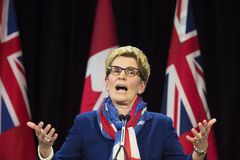 New federal advertising rules will limit use of Liberal red
May 12, 2016 Follow Bill Curry on Twitter @curryb
Report an error
Due to technical reasons, we have temporarily removed commenting from our articles. We hope to have this fixed soon. Thank you for your patience. If you are looking to give feedback on our new site, please send it along to feedback@globeandmail.com. If you want to write a letter to the editor, please forward to letters@globeandmail.com.
Comments