Talks to create a massive Pacific Rim free trade zone went into overtime Friday but failed to reach a hoped-for deal in Hawaii, raising the likelihood Canada's Conservative government may find itself negotiating this controversial accord while on the campaign trail.

An election call is expected within days and the Official Opposition, the NDP, says the Tories' bargaining power to cut a Trans-Pacific Partnership deal will decline once the writ is dropped.

Trade ministers from 12 Asia-Pacific countries including the U.S., Canada, Japan and Mexico had spent four days at a luxury Maui resort trying to clinch a broad-ranging agreement that would unite about 40 per cent of the world's economy in a single pact. It would cover everything from farm trade to the behaviour of state-owned enterprises to labour standards and auto imports.

Even before the U.S. officially called an end to the Hawaiian round of Trans-Pacific Partnership talks Friday afternoon, Australia's trade minister Andrew Robb lamented the lack of result, telling reporters: "The sad thing is 98 per cent is completed."

Sources familiar with the talks said nations were too far apart on dairy and autos – lowering tariffs on Japanese imports – and developing countries such as Peru and Chile were reluctant to grant significantly more copyright protection to "biologics," or biological products used to treat diseases.

Canada came under heavy pressure before and during the talks to significantly open its protected dairy market to more foreign imports and was blamed at times for acting as a laggard -- a stance that prevented a chain reaction of concessions from other parties from happening.

Speaking at the end of the day on Friday, New Zealand trade minister Tim Groser said he didn't want to point fingers at any country, for fear of causing "difficulties for my negotiating partners," but said he wanted "commercially meaningful access" to other nation's dairy markets and said this was a sticking point.

International Trade Minister Ed Fast, in an interview, said it's inaccurate to pin the blame for the lack of a deal on any one issue and said Canada had come to Maui prepared to conclude a deal.

He said the expectation among trade ministers is that they will reconvene "very soon" to try and clinch an agreement.

The U.S.-led Trans-Pacific Partnership talks are trying to establish North American-style trading regime as the dominant set of commercial rules in Asia, an agreement partly aimed at establishing a counterweight to Chinese influence in the region.

U.S. Trade Representative Mike Froman put a brave face on the Maui talks, saying ministers had nevertheless made important progress on matters such as intellectual property protections. Mr. Groser said he believed the Hawaii round had succeeded in "clearing the undergrowth" of obstacles that tend to hinder talks.

A deal would likely increase protection for patents and copyrighted goods and place new constraints on the conduct of state-owned enterprises; it would also open up the once-protectionist Japanese market to more foreign imports of items such as Canadian beef and pork.

Mr. Froman said countries will keep talking "intensively" but nevertheless did not name a date for ministers to reconvene.

"This is the most significant trade agreement since the Uruguay Round [of 1995] and because we're taking on not only traditional trade issues but also looking at raising standards ... it is a very complex undertaking."

This delay raises the possibility that Stephen Harper's government will be obliged to negotiate on a controversial matter such as foreign dairy imports while fighting an election campaign.

After the writ is dropped, the party in power has a caretaker responsibility to manage the affairs of Canada but whether the Conservatives have a legitimate mandate to negotiate concessions that would bind a future government is another question.

"I think what everybody would agree is that once the writ is dropped, that without a TPP deal, the Conservatives'  bargaining position certainly is weaker," NDP trade critic Don Davies said.

"Their ability to close and sell a deal is weakened."

Mr. Fast rejected this, telling reporters that the Conservative government would continue to negotiate toward a deal.

In an interview, he dismissed the New Democrat argument and accused Mr. Davies of a lack of credibility on the file.

"We gladly welcome a debate about trade. If the NDP wants to make this election about trade, bring it on."

Mr. Davies said the Conservatives are mishandling the trade file because, he argues, Mr. Harper appears too eager to cut a deal. "The Conservatives consistently put themselves in very compromised positions ... it weakens Canada's trade position."

Canada has been reluctant to significantly open up its heavily protected dairy, poultry and egg markets to more foreign competition – part of a chain of concessions that are believed to be necessary to trigger more generous market access on the part of other countries. New Zealand, a major milk exporter, has been pushing for far more ambitious concessions from the United States and the U.S. had wanted greater access to Canadian dairy markets so it could unload product displaced by an expected increase in Kiwi imports.

The president of the Canadian Dairy Farmers, however, blamed New Zealand, for not accepting what was on the table. "New Zealand is being very obstinate … I am really surprised that this late in the end game a country like New Zealand would not put a little water in its wine," Wally Smith said.

Japan had offered during talks to cut a 38.5 per cent tariff on foreign beef to 9 per cent over 15 years and also chop duties on foreign pork.

Canada remains under heavy pressure to allow more foreign shipments of dairy goods into the Canadian market and if this happens it could have significant consequences for the future of dairy farmers in this country.

Sources said trade ministers aired frustrations Friday morning at a "stock-taking" meeting and they likened the progress in negotiations to a marathon where almost all of the route has been traversed and scant distance remains from the finish line.

The difficult remaining issues – such as autos and dairy – will require significant more work, sources said.

Mr. Fast said this deal is too important to shelve but it requires more time to craft. "We're looking to establish 21st-century rules for trade within the Asia-Pacific region and we're talking about the largest trading bloc in the world." 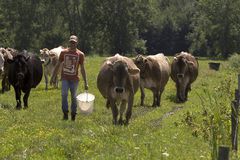 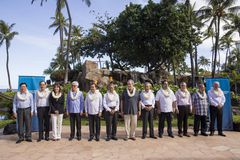 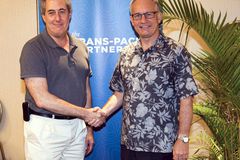 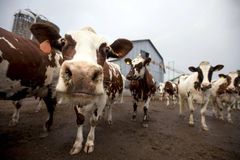