Provisions of Canada's new Pacific Rim trade deal are prompting concerns over credential recognition in light of a section that says there will be no limits and no testing of foreign skilled workers.

The 12 members of the Trans-Pacific Partnership released the text Thursday of the deal that was reached in early October. It includes extensive sections on business travel and the flow of skilled temporary foreign workers.

The temporary work sections of the TPP are raising strong concerns from labour unions that warn it raises questions about on-the-job safety and the protection of Canadian jobs.

"This text confirms our worst fears," said Gill McGowan, president of the Alberta Federation of Labour. "This deal will allow foreign companies to bring in what could be an unlimited number of temporary foreign workers in certain broad occupational categories … while bypassing all measures to protect Canadian jobs."

Supporters of the deal are playing down union concerns, arguing that Canada will still be able to ensure foreign workers meet local standards for training.

"This is really reminiscent of some of the fear mongering we saw around the Canada-U.S. trade agreement, around NAFTA, and frankly doesn't hold a lot of water when you actually read the text," said Cam Vidler, director of International Policy with the Canadian Chamber of Commerce.

As with previous trade deals, he said it will be up to the various professional bodies to work out mutual agreements on skills recognition.

"Nothing in this agreement tells a country what kind of certification they can or can't impose on workers. It just needs to be fair," he said.

Canadian officials were not immediately available to discuss the text, meaning it is not clear what the provisions would mean for provincial regulatory bodies that currently ensure that workers from outside the province meet existing standards.

Ms. Khaddaj said Canada retains the right to regulate professionals and technicians under the deal.

"Whether technicians need to complete a test to work in Canada depends on the specific occupation and whether there is a credential reciprocity arrangement between associations, where applicable," she wrote. "Canada's flexibility in the area of immigration and visa policy has been fully preserved and Canada maintains the right to regulate professionals supplying services in Canada."

The text of the deal states that professionals and technicians and their spouses could come to work in Canada for up to one year, with the potential for extensions. Workers who come to Canada under international trade deals are exempt from the screening process of Canada's Temporary Foreign Worker Program. That screening requires employers to seek Canadian workers first and to accept random audits of their workplace.

Recent reforms were meant to focus the program on lower-skilled work, while easing restrictions on the entry of higher-skilled labour through avenues such as trade agreements.

Advocates for such exemptions under trade deals argue that they are limited to highly skilled workers such as engineers who are required to fill a specific need.

However, the text of the TPP outlines a large number of specific trades that could come to Canada under a category called "professionals and technicians," including electrical trades and "other construction trades."

That section states that "Canada shall grant temporary entry and provide a work permit or work authorization to Professionals and Technicians and will not: (a) require labour certification tests or other procedures of similar intent as a condition for temporary entry; or (b) impose or maintain any numerical restriction relating to temporary entry."

Currently, regulatory bodies such as the Ontario College of Trades require all foreign-trained or out-of-province skilled trades professionals to have their skills and training assessed. In Ontario, that assessment is followed up with a written exam.

Ontario College of Trades spokesman Jan O'Driscoll said Friday that the organization is reviewing the TPP text "and the potential impact it may have on the certification and regulation of the skilled trades in Ontario."

Christopher Smillie of Canada's Building Trades Unions said his members are concerned by the provisions and are asking federal officials for clarity.

Carlo Dade, director of the Centre for Trade & Investment Policy with the Canada West Foundation, played down union concerns.

"It costs money to move people up here, so it's not like you're just going to save two bucks an hour to move a bunch of Mexicans up to work on the oil sands," he said. "If you're a company, the savings are only there if you're bringing people up for a specific need. ... Companies just aren't going to move masses of people up here to save a buck. It's a hassle and it's expensive." 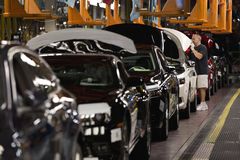