Companies could be forced to hand over documents under a new federal human-rights regime, and the Trade Minister says he will personally challenge the CEOs of firms found to be hurting Canada's international reputation.

Surrounded by human-rights advocates and union leaders Wednesday, Trade Minister François-Philippe Champagne announced the creation of a new independent ombudsperson who will have the power to investigate allegations of abuses by Canadian companies operating abroad.

The Canadian Ombudsperson for Responsible Enterprise, or CORE, is being promoted as the first office of its kind in the world and a step up from the existing mediator body, which has been criticized as weak and ineffective.

"We want to make sure that the ombudsperson has all the tools and resources to conduct these investigations," said Mr. Champagne, who made the announcement at the headquarters of Global Affairs. "We have the authority, and I'm prepared to use that authority – to compel documents if need be. We expect companies to engage in that process because we think that this is giving Canadian companies a competitive advantage. … Today, corporate social responsibility is core to business succeeding in the world."

If the watchdog is unable to obtain company records as part of an investigation, the government says it will be able to ask cabinet to approve an order in council compelling the company to hand over the files.

Some key details, such as the budget of the new office, were left for future announcements.

The government will also name an advisory body that will include representatives from industry, labour and human-rights organizations. The body will advise the government and the ombudsperson "on responsible business conduct abroad."

The office will initially focus on the mining, oil and gas and garment sectors, with a plan to include other business sectors within a year.

The minister said the new watchdog position will be independent of government. While the watchdog can only recommend sanctions, Mr. Champagne said the government would face public pressure to follow through on such advice.

"I will certainly do my best to engage with the CEOs or chairman of the board of these entities to say: 'We have an issue. You are damaging the reputation of Canada, for which you are benefiting greatly when you invest in countries,'" he said.

He also said the simple fact the watchdog can issue public reports will provide an incentive for companies to co-operate, given the increased focus on ethical investing.

Alex Neve, the secretary-general of Amnesty International Canada, was among the supporters at the announcement. He agreed that the watchdog's reports will be used by firms focused on ethical investing.

"The ethical investing community will look with great interest to the work of this ombudsperson," he said. "It offers something that simply hasn't been there before: a credible, independent body with some thorough, meaningful powers to look into the allegations that come forward."

Julia Sanchez, the president and chief executive of the Canadian Council for International Co-Operation, said civil-society groups have been pushing for such an office for more than a decade.

"There were many, many a time where we thought this might never happen, so it's great," she said. "I'm still pinching myself."

Barrick Gold Corp., the biggest gold company in the world by production, said it, too, supports the government's initiative.

"We look forward to engaging with the ombudsperson in a transparent and constructive manner," the company wrote in a news release. "Accountability and respect for human rights are central to our values as a company, and are enshrined in robust policies and procedures that apply to all of our operations around the world."

The Toronto-based company has significant mining operations in countries such as Peru, the Dominican Republic and Argentina. It has faced allegations of human-rights abuses at some operations, including sexual violence at a mine in Papua New Guinea about seven years ago. The company co-operated with a criminal investigation by police, fired a number of implicated employees and offered counselling services to the victims.

With files from Niall McGee in Toronto

Opinion
The world needs Canada back in the democracy export business
December 29, 2017 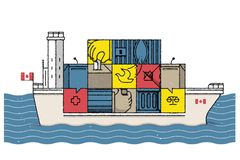 Duterte berates Trudeau on human-rights questions: 'Lay off'
November 14, 2017
Follow Bill Curry on Twitter @curryb
Report an error Editorial code of conduct
Due to technical reasons, we have temporarily removed commenting from our articles. We hope to have this fixed soon. Thank you for your patience. If you are looking to give feedback on our new site, please send it along to feedback@globeandmail.com. If you want to write a letter to the editor, please forward to letters@globeandmail.com.
Comments are closed