Jennifer McCreath has a fear of flying of a different sort: a fear she won't be allowed on board.

McCreath, a 43-year-old transgender woman in St. John's, N.L., takes issue with a federal regulation that prohibits airlines from transporting anyone who "does not appear to be of the gender indicated on the identification presented."

Doing away with the regulation is a cause the federal NDP has been pushing for five years, and one for which Justin Trudeau expressed support before becoming prime minister.

It's also one the federal Liberal government should be all over, given its self-proclaimed reputation as the party of the Charter of Rights and Freedoms, McCreath said in an interview Wednesday.

"It all comes back to the notion of equality," said McCreath, who described having to wait for two hours in a holding area before a flight to the United States in 2011, when she was in the process of changing the gender on her birth certificate.

The Canadian regulation, she said, gives officials too much power in cases where someone doesn't look like the gender indicated on their identification.

"Ultimately, access to air travel or any type of transportation is ... a fundamental service that's out there. It just sends the wrong message."

The regulation has nothing to do with safety and does little more than subject transgender Canadians to public humiliation and obstructs their fundamental right to travel, Garrison said.

He noted Trudeau himself raised the issue both in the House of Commons and on Twitter in 2012, when he was an opposition MP.

"If he supported removing this discriminatory regulation then," Garrison asked during question period Wednesday, "why as prime minister has he taken absolutely no action?"

The Liberal government is looking at the transgender issue, Garneau responded.

"We will have more to say in due course."

Public Safety Minister Ralph Goodale's office went further in a statement on Wednesday night, noting all passengers – regardless of their gender identity or expression – are expected to have a travel document that is valid and up to date.

"This includes ensuring that they accurately resemble their identification documents," the office said.

Earlier Wednesday, transgender Canadians were on Parliament Hill to push for the passage of the government's Bill C-16, a ban on discrimination on the basis of gender identity or gender expression.

If passed, the legislation would make it illegal to deny someone a job or to discriminate against them in the workplace on the basis of their gender identity or how they outwardly express it.

It would also amend the Criminal Code to extend hate speech laws.

"I don't look like the gender marker that is on my identification," said Johnstone, who identifies as neither a man nor a woman.

"I don't think it is very fair that if I tried to travel that because I'm trans, because I present differently than they expect me to, that they wouldn't let me travel."

The Liberal government also says it is working to address gender identity on passports – an issue already tackled in countries like Australia and New Zealand.

For her part, McCreath said she hasn't been back to the United States since 2011, a trip she used to take at least once a year.

"It left a very bad and sad taste in my mouth," she said.

"I learned very quickly that just because I'd had ... (sex-reassignment) surgery didn't necessarily mean I was going to find full acceptance in the world as a woman."

Ottawa to apologize to those who suffered because of sexuality
May 17, 2017
Opinion
Advancing LGBT rights in the Commonwealth is a delicate task
March 18, 2017
Federal officials wrestling with gender-neutral ID issues for more than a year
July 5, 2016 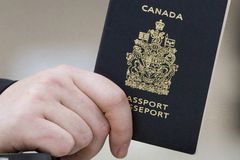