In a House of Commons that witnessed tears and, sometimes cheers, Justin Trudeau apologized on Tuesday on behalf of all Canadians for decades of organized persecution of sexual minorities by their own government.

At times wiping tears from his eyes, the Prime Minister told a sombre House of Commons: "Over our history, laws and policies enacted by the government led to the legitimization of much more than inequality – they legitimized hatred and violence, and brought shame to those targeted. … It is with shame and sorrow and deep regret for the things we have done that I stand here today and say: We were wrong. We apologize. I am sorry. We are sorry."

As he spoke those words, victims of a decades-long purge of gays and lesbians from the broader public service watched from the gallery and rose in applause, joined by MPs of all parties in a sustained and highly emotional ovation.

Opinion: Words are powerful but LGBTQ2 equality requires more than a Trudeau apology

Explainer: Trudeau's LGBTQ apology: A Globe guide to how we got here

Mr. Trudeau's address to the House followed years of demands by the LGBTQ community for an apology and redress for decades of active discrimination against sexual minorities by the federal government. A series of articles in The Globe and Mail in 2016 that detailed these abuses led to two reports by LGBTQ activists and then a government review culminating in Tuesday's apology.

From the 1950s to the early 1990s, officials sought to identify and eliminate from the ranks of the public service, military, RCMP and intelligence agencies people who were suspected of being homosexual.

In most of those years, people were criminally convicted of offences, such as buggery and gross indecency, under laws that violated principles of individual rights and freedoms.

"These aren't distant practices of governments long forgotten," Mr. Trudeau said. "This happened systematically, in Canada, with a timeline more recent than any of us would like to admit."

The apology had unanimous support within the House. "The government cannot – the government must not – deny the dignity or freedom of those citizens that seek to make Canada a better place," Opposition Leader Andrew Scheer told the House, although some chairs on the Conservative back bench were empty.

The government's commitment included the official announcement of an agreement-in-principle settling a class-action lawsuit brought by people who had been purged from the broader federal public service because they were homosexual.

Under that agreement, people whose careers were affected because of their sexuality in the years before 1996 – when the Canadian Human Rights Act was amended to prohibit discrimination based on sexual orientation – will be entitled to a minimum payment of $5,000 and a maximum of $150,000, depending on the degree of harassment or persecution they faced. Those who lost their jobs or were also subject to physical or sexual abuse will receive the highest compensation.

Although no one knows how many people suffered discrimination in the public service because of their sexuality, or how many are still alive, it is believed 2,000 to 3,000 people will make claims.

The government will commit $110-million for payments to victims, and a further $15-million for a reconciliation and memorialization fund. The fund will be used to create a monument in Ottawa to the victims of LGBTQ discrimination and for education, research and memorials across the country. The total cost of the settlement to the government is $145-million, including legal fees and administrative costs.

Douglas Elliott, who is lead counsel in the class-action suit, told reporters the settlement represented "the largest payment for damages for discrimination to the LGBT community anywhere in the world in the history of our movement. It is nothing short of historic."

As for the apology itself, Mr. Elliott said the words of all party leaders "touched my heart. I don't mind admitting I shed a few tears in the House today."

The government also introduced legislation on Tuesday to expunge the records of people who were criminally convicted for same-sex acts in the years when they were illegal.

"Those arrested and charged were purposefully and vindictively shamed," Mr. Trudeau observed. "Their names appeared in newspapers in order to humiliate them, and their families."

The legislation would not expunge the records of those who were charged under bawdy house laws in the days when police raided gay bathhouses, even though Mr. Trudeau criticized the raids in his speech, saying: "Our laws bolstered and emboldened those who wanted to attack non-conforming sexual desire." Tom Hooper, a historian who has researched the issue, said in a Twitter exchange that the bill should be amended to have those convictions expunged as well.

In the apology, Mr. Trudeau hoped "that in talking about these injustices, vowing to never repeat them, and acting to right these wrongs, we can begin to heal."

And he concluded with a promise: "We will never let this happen again." 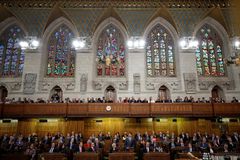 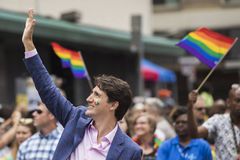 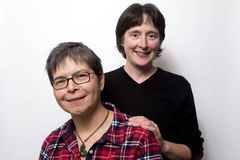