Prime Minister Justin Trudeau is calling on Canadian companies to put pressure on Boeing Co. to drop its trade complaint against Bombardier Inc., one day after vowing to continue freezing out the U.S.-based company from any federal contracts.

At a news conference on Tuesday, however, Mr. Trudeau turned the tables on Canadian firms that are part of Boeing's supply chain and urged them to direct their lobbying effort down south instead.

"I encourage people who work with Boeing across the country to tell the company the extent to which its actions against the Canadian aerospace industry is not in its interest and certainly not in the interest of Canadians," Mr. Trudeau said.

Mr. Trudeau said he will continue to "push back" against Boeing's effort to hurt the ability of Bombardier to sell its C Series aircraft in the United States.

"We have been very actively engaged, both directly with Boeing and with the American administration, including governors and congressmen and women, and we will continue to stand up and defend Canadian jobs," he said.

Mr. Trudeau has been ratcheting up the rhetoric against Boeing this week, fuelling the dispute that started with the company's complaint to the U.S. Department of Commerce against the Bombardier C Series aircraft in April. According to Boeing, Bombardier is dumping its newly designed aircraft in the American market at "predatory" prices because of illegal federal and provincial subsidies.

A first ruling by the U.S. International Trade Commission is expected on Sept. 25.

With his comments on Tuesday, Mr. Trudeau was in effect asking Canadian companies to take Bombardier's side in the dispute. However, a number of Canadian companies and industry associations have deliberately remained silent throughout the five-month-long dispute.

One signatory of the Sept. 5 letter to Mr. Trudeau, CAE Inc., scrambled after it was published in The Globe and Mail to contact federal officials and reassure them they were not asking Ottawa to stop supporting Bombardier, federal sources said.

CAE went on to issue a news release to reaffirm its support for Bombardier, arguing that its letter to the Prime Minister was not related to the dispute between Boeing and Bombardier.

"CAE disapproves the fact that both issues are being linked in recent media coverage," said the company that manufactures flight simulators.

"CAE is the training partner of choice of Bombardier on many platforms, including the C Series, a great aircraft. We are not in a position to tell Canada what platform to buy, but to simply champion our Canadian capabilities on procurements," said CAE president and CEO Marc Parent.

In the letter, senior executives from companies such as Héroux-Devtek, GE Canada and L3 MAS Canada emphasized the importance of Boeing for the Canadian aerospace industry.

"Prime Minister, we ask for your co-operation as we work with Boeing to keep our collective growth and innovation story unfolding here in Canada. Our partnership is deep and enduring, but it needs your engagement," the letter said.

On Monday, however, Mr. Trudeau promised to keep up the pressure on Boeing to drop its complaint against Bombardier, using federal contracts as his main bargaining chip.

"We won't do business with a company that is busy trying to sue us and put our aerospace workers out of business," Mr. Trudeau said.

The Prime Minister's threat was clearly related to the potential $6.4-billion deal for 18 new Super Hornet fighter jets that is already in the works. Still, his words could eventually apply to a much bigger prize, namely Ottawa's plans to buy 88 new fighter jets to replace Canada's CF-18 fleet in the next decade at a cost of nearly $20-billion. 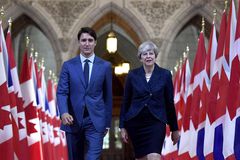 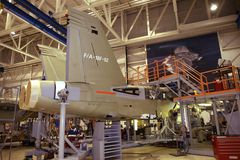 Canada tried to resolve Boeing-Bombardier dispute using Super Hornet deal: sources
September 15, 2017
Follow Daniel Leblanc on Twitter @danlebla
Report an error Editorial code of conduct
Due to technical reasons, we have temporarily removed commenting from our articles. We hope to have this fixed soon. Thank you for your patience. If you are looking to give feedback on our new site, please send it along to feedback@globeandmail.com. If you want to write a letter to the editor, please forward to letters@globeandmail.com.
Comments