Liberal Leader Justin Trudeau wants to save the oil sands by imposing greenhouse gas-emission limits on the fast-growing sector that is the engine of Alberta's economy.

The Liberal Leader has just returned from a visit to Fort McMurray, where he campaigned for the local Liberal candidate Kyle Harrietha in a coming by-election and toured Suncor Energy Inc.'s massive mining operation.

In an interview Wednesday, Mr. Trudeau asserted his support for the controversial oil sands industry that has drawn fire from critics over its fast-rising carbon emissions and its local ecological impacts. But he said Ottawa needs to prod the industry into making the environmental improvements that he said are necessary to ensure it gains crucial access to new markets.

While Prime Minister Stephen Harper has aggressively supported oil-sands growth, Mr. Trudeau said the government has failed the industry by giving its critics ample ammunition to attack its environmental performance. He argued U.S. resistance to the proposed Keystone XL pipeline, and opposition to projects that would export Alberta crude from B.C. ports, should be laid at the doorstep of the Conservative government.

"If we had a clear set of environmental frameworks and regulations and oversight, we would have reassured both Canadians and our trading partners that we were not forgetting about the environment in our drive to extract economic benefit from our resources," the Liberal Leader said.

"The fact is that the oil sands have somehow become a poster child for climate change. That is a failing of both government and industry for allowing that to happen because they weren't doing enough to reassure people that the environment is a priority."

A Liberal government would adopt a national climate policy – in collaboration with the provinces – that would target both consumers and industry, including regulations aimed at limiting greenhouse gas emissions from the oil sands, he said.

At the same time, the United Nations' Intergovernmental Panel on Climate Change is warning that the world has little time to reverse course and cut fossil-fuel emissions if it is going to avoid the catastrophic impacts of global warming.

While Mr. Trudeau faults the Conservative government's approach, the Alberta-based oil sands industry is cautiously hopeful that its market-access issues may soon be resolved.

Many industry insiders expect that this summer the Obama administration will approve the Keystone XL pipeline project, which would carry oil sands bitumen to the U.S. Gulf Coast refining sector. Similarly, the federal cabinet is likely to give its approval by the end of June for Enbridge Inc.'s Northern Gateway pipeline, though it faces legal challenges from aboriginal communities in B.C.

And TransCanada Corp. is preparing an application to build a west-to-east pipeline that would carry 1.1 million barrels a day of crude to refineries and export terminals in Quebec and New Brunswick.

Still, the industry is resisting any effort to impose costly GHG regulations on Canadian producers that are not shared by oil companies operating in the United States or elsewhere around the world, and Mr. Harper now says he wants to work with the U.S. to adopt equivalent regulations.

"I think we can and we must" act unilaterally, Mr. Trudeau said, adding he believes the industry recognizes it must dramatically improve its performance. 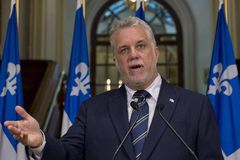