With just days left before Canadians head to the polls, Liberal Leader Justin Trudeau is facing tough questions over the resignation of his campaign co-chair.

Dan Gagnier resigned as co-chair on Wednesday, after revelations that he advised TransCanada Corp. on the best ways to lobby the federal government after the Oct. 19 election. The Liberals are leading the polls, and Mr. Gagnier had been one of the Liberal Leader's top five advisers, gaining inside knowledge on Mr. Trudeau's team and its thinking.

Mr. Trudeau said Friday he showed leadership by dealing with the matter quickly, even as his rivals argue that Mr. Gagnier was representative of the continuing ethical challenges of the Liberal Party.

"We always made sure that Mr. Gagnier was not involved in the campaign on discussions of energy policy," Mr. Trudeau said at a stop at a retirement home in Mississauga. "When we learned that he had engaged in inappropriate behaviour, by mixing the two roles, he assumed responsibility for what he did and stepped away from the campaign."

Heading into the final weekend, the latest Globe-CTV-Nanos nightly tracking has the Liberals with 36.5 per cent support, the Conservatives at 30.6 per cent and the NDP at 23.5 per cent.

Stephen Harper's Conservatives are launching a final TV advertising blitz in Ontario this weekend against Mr. Trudeau as the Tories scramble to erode their rival's front-runner status.

A new TV ad, which the Conservatives say will be played during Saturday's Blue Jays game against the Kansas City Royals, is a compendium of familiar shots at Mr. Trudeau. But the ad also attempts to build a connection between Mr. Trudeau's policies and those of Liberal Ontario Premier Kathleen Wynne. It's aimed at stirring up animosity among Ontario voters about the fiscal record of the Wynne government and tars Mr. Trudeau with the same brush.

Ontario is the most important battleground in the federal election with 121 seats, or more than one-third of the Commons, up for grabs.

But it was the controversy over the actions of Mr. Gagnier that provided ammunition Friday, with NDP Leader Tom Mulcair continuing his attack against the Liberals.

The New Democrats say that reminder could have an especially strong positive effect for them in Quebec, where they won 59 seats in 2011 and, in some cases, are fighting against Liberals to keep them. The party has thrown together last-minute advertising to capitalize on the Gagnier affair, and French-speaking Quebeckers who listen to their radios this weekend will hear NDP MP Alexandre Boulerice lamenting the dark ways of Liberal lobbyists.

The Liberals are arguing that, faced with a controversy, Mr. Trudeau did a better job than Mr. Harper in overseeing the speedy departure of Mr. Gagnier from his team.

Mr. Harper said his campaign staff and volunteers are not giving advice to potential corporate clients during the campaign and drew attention to the fact that the Liberals are the only party accused of this.

"We have a very strict code of ethics within the Conservative Party," the Tory Leader said during a campaign stop in the Quebec City area where the Conservatives hope to win more seats.

"Frankly there is no other party in this election that is accused of the things the Liberal Party and Mr. Gagnier have done," Mr. Harper said. "It is about the old culture of the sponsorship scandal; it's not about anybody else, it's about the Liberal Party."

Mr. Trudeau said he was happy to have Mr. Gagnier on his team, explaining that he liked to get advice from people with different backgrounds and professional experiences.

"There are rules and regulations overseeing political campaigns, and we have ensured every step of the way that we have followed all those rules. More than that, when this inappropriate e-mail came to light, we took immediate action and Mr. Gagnier took responsibility for his actions and stepped away from the campaign," he said.

A veteran of politics with experience in the private sector, Mr. Gagnier stood out among the senior Liberals who advise Mr. Trudeau on a daily basis. Mr. Gagnier is in his late 60s and his time in Ottawa goes back to the 1970s, while Mr. Trudeau's other close advisers are in their 30s and 40s, many with young children at home and few ties to past Liberal governments in Ottawa. As the Liberal Leader since 2013, Mr. Trudeau has benefited from the fact a majority of his team had no ties to the Liberal scandals of the past, or the Martin-Chrétien internal wars.

One of the main qualities that Mr. Gagnier brought to the team, according to his former colleagues, was the calming influence of someone who had seen it all and was able to pass along bits of wisdom.

TransCanada said it hired Mr. Gagnier last spring primarily to guide the firm "on how best to communicate the benefits of the [Energy East] project to Canadians." His downfall started on Monday, when he sent a note to officials at the firm about the potential scenarios after the Oct. 19 election, including ways to lobby federal officials on its development and pipeline projects.

His involvement became public on Wednesday, when his e-mail to the firm was leaked to the media.

The Nanos Research poll conducted for CTV and The Globe and Mail surveyed 1,200 Canadians from Oct. 13 to 15. It has a margin of error of 2.8 percentage points, 19 times out of 20. 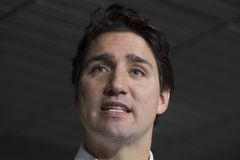 Campaign Notebook: Polls show Canadians believe Trudeau main challenger to Harper
October 16, 2015
Follow Daniel Leblanc, Steven Chase and Gloria Galloway on Twitter @danlebla @stevenchase @glorgal
Report an error Editorial code of conduct
Due to technical reasons, we have temporarily removed commenting from our articles. We hope to have this fixed soon. Thank you for your patience. If you are looking to give feedback on our new site, please send it along to feedback@globeandmail.com. If you want to write a letter to the editor, please forward to letters@globeandmail.com.
Comments