The Trudeau government is calling on Russia to stop backing Syrian President Bashar al-Assad in light of a chemical-weapons attack by Damascus against civilians last week, saying Moscow must decide whether it wants to remain aligned with a "murderous regime" that kills its own people.

The blunt talk by Canada came as relations between Russia and the United States chilled considerably, with U.S. Secretary of State Rex Tillerson warning Russia that it was risking irrelevance if it did not withdraw its support for Mr. al-Assad, and Russian President Vladimir Putin suggesting Washington was using flawed intelligence regarding the chemical attack.

Read more: Trump's air strikes in Syria: What we know so far

Mr. Putin, speaking Tuesday in Moscow, said the Trump administration's accusations against Syria over the April 4 chemical-weapons deployment resembles the false claims made before the United States invaded in Iraq in 2003.

The White House, meanwhile, drawing from a four-page declassified dossier on the attack that killed at least 86 people, told reporters that Russia has shown a clear pattern of trying to shift blame for chemical-gas attacks away from Syria and said there is no evidence to support Moscow's claims that the April 4 incident was fabricated.

Ms. Freeland said the Assad regime was guilty of a "war crime."

"Canada is very much of the view that, particularly in the wake of what is a war crime – the use of chemical weapons last week – that Assad has to go," she said to journalists by telephone Tuesday, following a meeting of Group of Seven foreign-affairs ministers in Italy.

In what was arguably the strongest language used to date by the Trudeau government when addressing Russia, Ms. Freeland urged Moscow to withdraw support for Mr. al-Assad.

"Russia is a patron and supporter of Assad. … Russia needs to decide whether it wants to double down on its support for this murderous regime that is committing war crimes or whether it wants to say: 'We do not want to be associated with this,'" she said.

Canada's sharp criticism of Russia will test the Liberal government's pledge to re-engage with Moscow after years of chilly relations under former prime minister Stephen Harper.

Ms. Freeland called on Russia to push the Assad government to participate in political negotiations to bring peace to Syria, which has been in engulfed in a civil war for more than six years.

As recently as April 4, the Syrian government deployed chemical weapons – suspected of being sarin gas – against adults and children near the town of Khan Sheikhoun in northwestern Syria.

The Canadian government strongly supported the U.S. government's April 7 air strikes against Syria – the first by Washington since the Mideast country's civil war began – because it was framed as a response to the April 4 chemical-gas attack. The missile strike targeted an airbase that the United States said was used to deploy the chemical attack.

On Monday, Prime Minster Justin Trudeau had spoken somewhat less directly about Mr. al-Assad's future, saying: "We need to move as quickly as possible toward peace and stability in Syria that does not involve Bashar al-Assad."

On Tuesday, speaking to journalists, Ms. Freeland declined to say whether Canada would support further unilateral U.S. strikes against Syria in response to future use of barrel bombs – long criticized for the damage they inflict on civilians.

Mr. Tillerson said Russia had a decision to make: Side with the United States and like-minded countries on Syria, or embrace Iran, the militant group Hezbollah and the embattled Syrian leader, Mr. al-Assad.

As the U.S. Secretary of State embarked on a trip to Moscow following urgent meetings in Italy with top diplomats, Mr. Tillerson said it was unclear whether Russia had failed to take seriously its obligation to rid Syria of chemical weapons, or had merely been incompetent. But he said the distinction "doesn't much matter to the dead."

"We cannot let this happen again," he said.

"We want to relieve the suffering of the Syrian people. Russia can be a part of that future and play an important role," Mr. Tillerson added, in remarks to reporters. "Or Russia can maintain its alliance with this group, which we believe is not going to serve Russia's interests longer-term."

Russia's Foreign Ministry said in a statement that it hoped for "productive talks." It said the outcome of the discussions is important not only for the Russia-U.S. relationship, but "for the overall atmosphere on the world stage."

Since Friday's missile strike against Syria, Trump administration officials have offered mixed messages about whether Washington believes Mr. al-Assad definitely must surrender power – and when. Mr. Tillerson said it was clear the United States saw no role for Mr. al-Assad in Syria's future, given that he had lost legitimacy.

"It is clear to all of us that the reign of the Assad family is coming to an end," he said. "But the question of how that ends and the transition itself could be very important, in our view, to the durability, the stability inside of a unified Syria."

Opinion
Will Syria’s children ever be able to breathe?
April 7, 2017
U.S. hardens stance on Russia over al-Assad support
April 9, 2017 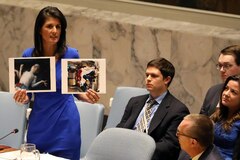 Under pressure: In Moscow, Tillerson faces uphill battle to turn tough talk into cohesive strategy
April 11, 2017
Follow Steven Chase on Twitter @stevenchase
Report an error Editorial code of conduct
Due to technical reasons, we have temporarily removed commenting from our articles. We hope to have this fixed soon. Thank you for your patience. If you are looking to give feedback on our new site, please send it along to feedback@globeandmail.com. If you want to write a letter to the editor, please forward to letters@globeandmail.com.
Comments