Edmonton MP Randy Boissonnault, who will lead the process for redressing the wrongs committed against sexual minorities in Canada, believes that he is embarking on "our community's truth and reconciliation opportunity," a chance "for people to speak their truth and for us as a country to realize what the government of Canada officially did."

Mr. Boissonnault will spend the next three years listening to people who were convicted and imprisoned, in the years before 1969, when it was a crime to be gay; those who lost their jobs in the public service or the military until the late 1980s; and those who suffer today from discrimination based on their sexuality.

He will recommend to Prime Minister Justin Trudeau how the government should respond, with the response to be fully in place before the next election. At its heart, this will involve an official apology for the past mistreatment of members of sexual minorities, along with possible compensation and pardons.

Related: Ottawa moves on plans for apology to those wronged over sexuality

Related: Ottawa behind schedule in redressing past persecution of homosexuals

Read more: The power of an apology

"There are an awful lot of people in our community who have waited an awful long time for an apology from the government of Canada," Mr. Boissonnault said, "… so we're going to take our time and get it right."

The government created this one-person task force in response to a series of articles by The Globe and Mail that examined past injustices to members of sexual minorities in Canada, which led to a report by Egale, an organization that advocates for the LGBTQ community.

Mr. Boissonault's mandate is to work through implementing the recommendations contained in the Egale report.

He will hear the stories of young people in the public service and military who were hauled before interrogators, questioned, accused and subjected to polygraph tests before being fired or discharged.

"To have the state come into your office and do that to you is objectionable and abhorrent," he said, "and it's why these stories have to be told and become part of the official record."

A francophone who grew up in the small northern Alberta town of Morinville – his father was a mechanic who oversaw gravel pits and his mom drove a forklift – Mr. Boissonnault struggled with the knowledge that he was gay through his years at the University of Alberta and Oxford University, finally coming out to his family in 1998, when he announced that he would bring his partner to his brother's wedding.

"They took it really well," he grins.

"We've been waiting for this for 500 years," a delighted Douglas Elliott, a lawyer and advocate for sexual minorities, told Ms. Wilson-Raybould after a news conference announcing the legislation.

But not everyone approves. "The Criminal Code prohibition against homosexuality was based on the moral law as expressed in the Judeo-Christian faith and principles," stated the conservative advocacy group Real Women, which is opposed to any apology. "… It may not be acceptable to everyone, but it was not unjust discrimination."

While this may represent the view of only a small minority,  more controversial is whether people who were convicted or dismissed deserve financial compensation, such as pensions that some would have been entitled to. There is also the question of whether pardoning those who were convicted under the old anal-intercourse and indecent-exposure laws might inadvertently include people who committed sexual assault.

"That's what we need to study," Mr. Boissonnault acknowledged. "That's why we are going to take the time to get it right."

He intends to spend much of 2017 listening to stakeholders, before delivering his recommendations.

"We have to address the wrongs of the past, because they are real and substantive," Mr. Boissonnault said. "But we also have to pay attention to how do we build going forward." 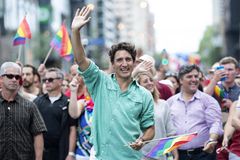