Conservative interim leader Rona Ambrose says Donald Trump's election "changes everything" for Canada and is questioning whether the Liberal government will reconsider some of its major policy planks to keep the country competitive.

Ms. Ambrose, who holds her position until the new Conservative leader is chosen in May, said Prime Minister Justin Trudeau needs to come up with a plan to protect Canadian jobs in the face of the president-elect's pledge to renegotiate the North American free-trade agreement and lower corporate and income taxes.

"Now Trump is elected and this changes everything. The government is not recognizing that or responding to it," Ms. Ambrose said in a year-end interview in her Parliament Hill office.

Related: Canadians want Trudeau to stand up to Trump, but welcome a visit: Nanos poll

"This next year is going to be a huge test for Justin Trudeau."

Mr. Trudeau, however, recently said he will forge ahead with policies aimed at cutting carbon emissions, regardless of Mr. Trump's retreat from climate-change measures. He also said he remains a supporter of the Keystone XL pipeline, which the president-elect has vowed to approve.

Ms. Ambrose criticized a number of the Trudeau government policies that will raise costs on business and consumers, including a national price on carbon, an expanded Canada Pension Plan and Employment Insurance premiums that won't be as low as the Conservatives had planned. She also noted that the Liberals are planning to make changes to various tax credits and have not ruled out imposing new taxes on health and dental benefits.

"A responsible leader has to respond to a changing environment and a changing situation. And things changed a lot when Trump got elected," she said.

The interim leader, who has been on the job since November, 2015, said she's proud of the work she accomplished in the past year, representing 99 Conservative MPs.

But she never viewed her position as temporary.

"We made a decision that this wasn't going to be a placeholder position," Ms. Ambrose said. "I would lead the party. And so I would make decisions."

Those decisions included everything from administration ("We walked into this office, and there wasn't a phone. There was not a scrap of paper," she says), to policy, to tone. One of Ms. Ambrose's first moves as interim leader was to support an inquiry into missing and murdered aboriginal women – something her predecessor resisted. She's also visited Atlantic Canada five times, hoping to regain support in a region that rejected her party in the past election.

With nine ministerial portfolios under her belt, she said she never considered running for permanent leader.

"I just felt like this was a good role for me. I'm a bridge builder. I know a lot of these people very well. I felt like I could have their trust," she said.

There are currently 14 candidates running for the Conservative leadership, and Ms. Ambrose is staying neutral in the race.

She said she's happy there are two women – Kellie Leitch and Lisa Raitt – currently in the running.

"It's very unusual, right, in this day and age still, to have women running for the leadership of a national party with such broad support as ours," she said. "So it's great to see."

In the meantime, Ms. Ambrose said she's concerned about what will happen to the Canadian economy once Mr. Trump is sworn in as U.S. president on Jan. 20.

"If we can't compete … we're going to lose Canadian jobs to the U.S., and that's the reality. We live in a global environment and jobs move, and investment moves. And I don't think the Prime Minister is ready for this," she said.

"It begged the question, 'Are we ready?'"

Canadians want Trudeau to stand up to Trump, but welcome a visit: Nanos poll
December 26, 2016 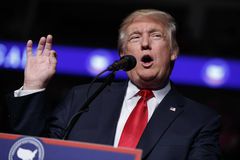 Trump views Canada favourably, Mulroney says
December 6, 2016
Follow Laura Stone on Twitter @l_stone
Report an error Editorial code of conduct
Due to technical reasons, we have temporarily removed commenting from our articles. We hope to have this fixed soon. Thank you for your patience. If you are looking to give feedback on our new site, please send it along to feedback@globeandmail.com. If you want to write a letter to the editor, please forward to letters@globeandmail.com.
Comments