Prime Minister Justin Trudeau is poised to sign on to a continental environment and climate-change strategy with outgoing President Barack Obama when the two leaders hold their first formal bilateral meeting in the Oval Office next Thursday.

International Trade Minister Chrystia Freeland, who chairs the cabinet committee on Canada-U.S. relations, told The Globe and Mail that the White House talks will also result in improved border-security measures and steps to conclude a new softwood-lumber agreement.

Canadian and U.S. officials are now working hard behind the scenes to present an environmental and climate-change package for the leaders to announce, but the exact details of what it entails are being kept closely under wraps. But sources say the agreement is expected to deal with tighter fuel and auto-emission standards and measures to foster innovation such as electric cars, charging stations, self-driving vehicles and ride-sharing apps.

"The visit is still coming together but I am very hopeful there will be some real accomplishments on the environment and climate change," Ms. Freeland said in an interview. "We are still 10 days away and negotiations are very intense right now and I am not going to get ahead of where negotiators are."

There is also expected to be an exit-entry announcement for Canadians and Americans travelling across the border, similar to airline passenger information shared by both countries.

The two leaders are hoping to defuse a potentially serious trade irritant with the expired softwood-lumber deal. Sources say U.S. officials are telling Canadian negotiators they can't renew the deal during a U.S. election year, fearing it could cost the Democrats seats in Congress.

The low Canadian dollar, combined with strong U.S. housing starts, is creating new demand for Canadian softwood lumber, but it's also attracting the wrath of U.S. producers, who seem uninterested in renewing the 2006 agreement that expired in October, 2015.

If the deal is not renewed by October of this year, Canadian softwood-lumber producers could be hit with new tariffs. Sources say the leaders are expected to announce a process for negotiating a new deal without imposing penalties during those talks. The two leaders may agree to appoint two envoys to handle the dispute.

"This is also an area where we are working minute by minute because I think all Canadians know the importance of this industry, across the country," said Ms. Freeland, who declined to discuss the negotiations. "We are working very hard on it. We are working in very close consultations with the industry and the provinces and territories. It is early days here, but we have our shoulders to the wheel here."

Ms. Freeland said Mr. Trudeau first raised the issue of softwood lumber in his first informal meeting with Mr. Obama during the Asia-Pacific Economic Co-operation summit in Manila last November, which led to the opening of talks between Canada and the U.S. It was at that meeting in Manila where Mr. Obama invited Mr. Trudeau to Washington, promising to hold a rare state dinner in his honour.

"It is significant – Canada hasn't been invited to a state dinner at the White House since 1997," Ms. Freeland said.

Jean Chrétien was the last Canadian prime minister to be invited to a state dinner, hosted by then-president Bill Clinton. The two men had developed a close friendship and often golfed together.

Ms. Freeland was in the room in Manila when Mr. Obama met Mr. Trudeau and she said it was obvious that the President was delighted to meet a Canadian leader who shared his socially progressive agenda and passion to combat climate change.

"Both in the words spoken and in the mood at that meeting, you could really see the tremendous personal and professional sympathy between those two leaders. I think they are leaders, in many ways, with very similar political trajectories, with alive political values. … You could just feel the warmth between them," she said.

However, the President is likely to be disappointed that Mr. Trudeau will not endorse the 12-nation Trans-Pacific Partnership trade deal during the visit. Ms. Freeland said the Prime Minister will only say the deal needs to be evaluated and the public consulted during parliamentary hearings, expected to last between six to nine months.

"This was a deal negotiated by the previous government. It was negotiated in secret. And our Prime Minister and our entire government has a very deep commitment to transparency and a full national dialogue," Ms. Freeland said.

After the Oval Office meeting on March 10, Mr. Obama and U.S. Secretary of State John Kerry will host a luncheon for Mr. Trudeau, Canadian and American cabinet ministers and key advisers.

No one will release details of the state dinner that evening, including who is getting a highly coveted invitation, what's on the menu or the designer of the gowns that Sophie Grégoire-Trudeau and Michelle Obama plan to wear.

"I am not allowed to say anything about that, otherwise I would be shot, so you will have to ask a more powerful person than me," Ms. Freeland joked.

The American media have become fascinated with Mr. Trudeau and his glamorous wife. Vogue magazine did a photo spread of the couple and described Mr. Trudeau as the "new young face of Canadian politics" while the New York Post dubbed Ms. Grégoire-Trudeau "the hottest first lady in the world." The New York Times Magazine and Washington Post have written about the Trudeaus.

When The Globe and Mail asked the Prime Minister last week what his wife would be wearing to the state dinner, he laughed and said she wasn't even telling him. 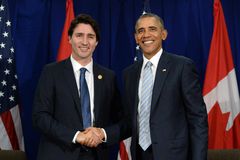 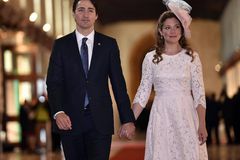 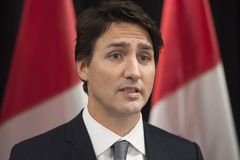