Barack Obama is a U.S. President in the final year of his final term, but Justin Trudeau says that could make for a positive and busy year in Canada-U.S. relations.

During the 16-hour flight between the G20 Summit in Turkey and the Asia Pacific Economic Co-operation Summit in Manila, Philippines, Canada's new Prime Minister came to the back of the plane to take questions from reporters on a wide range of topics, including his upcoming bilateral meeting with the President at APEC.

"One of the things I pointed out in our very first conversation on the phone was his focus on getting big things done in his final year — looking at legacy — dovetails nicely with my desire to get big things done off the bat in my first year and set the tone for the coming years," he said. "So I think there's a nice dovetailing of a desire to get things done and not put things off. That means we're going to have a lot to agree on."

The relationship started on a difficult note with the President rejecting the proposed Keystone pipeline, though the decision had been expected for some time.

The two leaders both agree on climate change, pushing other countries to accept an aggressive plan at the upcoming climate conference in Paris at the end of the month.

While both Mr. Trudeau and Mr. Obama are attending a summit focused on promoting trade in the Asia Pacific region, the Prime Minister said one of his priorities for this week's meeting will be to talk about "a proper continental approach" in North America.

"The challenge that we have is ensuring that the three North American countries are properly co-ordinated in our energy plans, in our environmental plans and the desire that we share to remain competitive in the world economy," he said. "I know that there's an awful lot we can do."

> Saskatchewan Premier Brad Wall is leading a call, with support from some mayors and the premiers of Quebec and B.C., urging greater care in security screening for Syrian refugees.

> Potential Conservative leadership candidates (for subscribers) have been vocal with criticism over Justin Trudeau's handling of the terrorism file.

> The Liberal government says it will launch an inquiry into missing and murdered indigenous women before next summer.

> The Liberal government has also dropped an appeal, initiated by the previous administration, concerning the ban on wearing the niqab during citizenship ceremonies.

> How the Liberals might change Bill C-51, the Conservative anti-terror law.

> And a Liberal MP has deleted photos of a "hurtful" Halloween costume based on Asian culture.

"By far, the most serious threat of Islamic State-related terrorism in the West involves not the masses of refugees escaping violence in Syria, but rather the hordes of Western fighters who travelled to the Middle East to fight for IS and are now coming back home." – Omar El Akkad (for subscribers) on what fuels radicalism.

Michael Molloy (Globe and Mail): "These refugees are victims of the same evil visited on our French cousins."

Jeffrey Simpson (Globe and Mail subscribers): "If indeed the French are Canada's 'cousins,' as Prime Minister Justin Trudeau described them, his government has a funny way of showing affection."

Chantal Hebert (Toronto Star): "Ultimately though, recasting Canada in the war on terrorism in the Middle East along less combat-oriented lines will likely come more easily to the rookie Liberal government than shoring up public confidence in its plan for settling tens of thousands of Syrian refugees in Canada."

How Conservative leadership hopefuls are jockeying behind the scenes
November 13, 2015 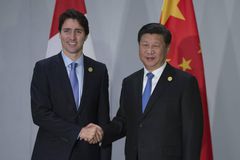 Politics notebook: Obama applauds Trudeau in closed-door meeting
November 16, 2015
Follow us on Twitter @globepolitics Opens in a new window
Report an error Editorial code of conduct
Due to technical reasons, we have temporarily removed commenting from our articles. We hope to have this fixed soon. Thank you for your patience. If you are looking to give feedback on our new site, please send it along to feedback@globeandmail.com. If you want to write a letter to the editor, please forward to letters@globeandmail.com.
Comments