In an keynote speech to the World Economic Forum, Mr. Trudeau called on corporate chief executives to put workers before profits and take major steps to boost the role of women in the work force and tackle sexual harassment.

"Too many corporations have put the pursuit of profit before the well-being of their workers … but that approach won't cut it any more," Mr. Trudeau told the elite gathering at the chic ski resort of Davos. "We are in a new age of doing business – you need to give back."

Mr. Trudeau has been under pressure from Canada's business community to cut taxes and regulations to match the competitive reforms undertaken by U.S. President Donald Trump and the Republican Congress.

The Prime Minister, who also met with CEOs of several major multinationals on Tuesday to pitch for investment dollars in Canada, said too many people are being left behind by automation and globalization.

"People have been taken advantage of, losing their jobs and their livelihoods," he said. "All the while, companies avoid taxes and boost record profits with one hand, while slashing benefits with the other."

Mr. Trudeau's comments were the strongest signal yet that his government has no desire to follow the U.S. example of massive tax cuts for the wealthy to spur economic growth.

"We should ask ourselves – do we want to live in a world where the wealthy hide in their gated enclaves, while those around them struggle?" he said.

Mr. Trudeau credited the Liberal government's decision to tax wealthier Canadians and boost spending on social programs, such as the child-care benefit and expanded Canada Pension Plan, for Canada having the best growth rate in the G7 and the lowest unemployment in 40 years.

"Asking the wealthy to pay a little more and giving more benefits to those who really need it has resulted in growth that has benefited everyone, that is truly lifting all boats," he said.

Mr. Trudeau's approach to managing the economy was praised by Ulrich Spiesshofer, president and CEO of ABB Group, the massive Swiss robotics and industrial automation firm that recently set up a new $90-million office in Montreal.

"We think Canada is the place to be. I congratulate Canada and keep on going this way," Mr. Spiesshofer said, as he also downed played uncertainty over the North American free-trade agreement.

But John Manley, the head of the Business Council of Canada, said Mr. Trudeau is making a mistake by not taking into account that dramatic U.S. tax changes will drive investment dollars to south of the border.

"The U.S. tax reform is in some ways a bigger challenge for us than the uncertainty over NAFTA because it really eliminates what has been really for quite a number of years a tax advantage for Canadian business," he told reporters. "Regrettably, they are the big market so we need some advantage, otherwise investment tends to flow in their direction."

In his speech to about 1,000 people, Mr. Trudeau was applauded when he spoke about the #MeToo movement and the women's march for equal rights, saying sexual harassment is a systematic problem in the workplace.

"When we receive those complaints, we must take them seriously," Mr. Trudeau said. "As women speak up, it is our responsibility to listen and, more importantly, to believe."

Mr. Trudeau pointed to a McKinsey report that estimates that by narrowing the gender gap, Canada could add $150-billion to its economy. He pointed to the government's promise to bring in gender pay-equity legislation for federally regulated industries and boasted about Ottawa's actions on parental leave.

"As corporate leaders, consider a gender-balanced board or gender-balanced project teams," he said. "Any time we're looking for a new hire, we should be identifying women candidates at a rate equal to men."

Women make up only 21 per cent of the 2,500 people at the ritzy World Economic Forum, where the global elite each pay $85,000 (Canadian) to attend all the events in Davos.

The Prime Minister is a popular figure at the Davos schmooze-fest. He attended a reception hosted by former Vanity Fair editor Tina Brown and Credit Suisse CEO Tidjane Thiam on Tuesday evening and later went to a dinner held by Chinese multibillionaire Jack Ma, founder of Alibaba Group.

On Wednesday, Mr. Trudeau will participate in a Canada-U.S. economic roundtable where the focus will be on NAFTA. 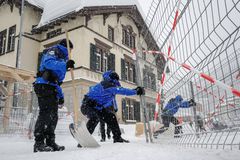 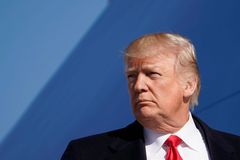