Prime Minister Justin Trudeau rallied nervous Liberal MPs to fight the blowback from small business and medical professionals over the government's proposed tax reforms, but suggested he is open to minor adjustments in the face of mounting criticism.

In his opening remarks on Wednesday at the party's two-day caucus retreat in Kelowna, B.C., Mr. Trudeau was unapologetic about his government's proposal to close what it calls tax loopholes that benefit the wealthy, casting the measure as an issue of fairness.

But he also signalled his government is open to suggestions of "tweaks" from Liberal MPs who have been inundated with complaints from doctors and small business owners over the proposed changes.

The Liberal government is facing significant pushback from small-business owners and the medical community, many of whom were previously encouraged to incorporate, as well as the Conservatives, who claim the measures will have a devastating impact on the economy. Those proposals include restricting income "sprinkling," which would reduce the total amount of tax the family pays, to adult children; limiting a business owner's ability to convert income into capital gains; and restricting the use of private corporations as a vehicle for making passive investments.

The government announced the proposed changes in July along with a 75-day consultation period, which ends on Oct. 2.

Dr. Gigi Osler, the incoming president of the Canadian Medical Association, said the changes will significantly impact female doctors, who she said make up two-thirds of family physicians under the age of 35. Dr. Osler said female doctors often delay having children to pursue their medical practices and save for maternity leave using the tax measures, such as passive earnings.

"[Women] are looking at these proposed changes and wondering 'how am I going to run my practice, and pay for my expenses and pay my salaries, and afford a mat leave,'" Dr. Osler said.

"What we're hearing is that women – and not just women doctors – will be unfairly disadvantaged."

Finance Minister Bill Morneau told reporters on Wednesday that the government will consider changes brought up during consultations with various groups, including its own caucus, but appeared unwavering on the essence of the proposal. He is also planning to tour the country in the coming weeks with Small Business Minister Bardish Chagger in an effort to explain the government's plans.

"We will certainly hear places where we need to make changes to the proposals in order to make sure that we obtain our objective, which is to make sure our system is effective, that we deal with some tax advantages that aren't available to all Canadians," he said.

He added that the government wants to ensure the measures don't negatively impact women.

"We will look at the proposals to make sure that they don't have unintended consequences," he said. "In terms of women professionals, nothing in our proposals will present a problem for women to continue to save within their corporation."

Dr. Jane Philpott, a family doctor and Minister of Indigenous Services, said the changes won't impact, for instance, a doctor's ability to claim as a business expense the hiring of someone else to cover their practice while on parental leave.

The Canadian Nurses Association, on the other hand, said it agreed with Mr. Morneau's proposal to even the playing field in the medical community.

"CNA supports the proposed changes to the federal tax code which reasonably strengthen the rules on increasingly-popular but potentially unfair tax advantages for incorporated high income earners," president Barb Shellian said in a statement on Facebook.

Liberal MPs acknowledge the issue has taken up a lot of airtime in their ridings this summer.

"We need to do a better job in getting the message out as to what we want to accomplish," he told reporters.

Liberals will not back down on small-business tax reform: Morneau
Subscriber content
September 5, 2017 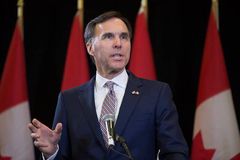