An Indian politician who publicly accused members of Justin Trudeau's cabinet of being connected to the Sikh separatist movement will meet the prime minister later this week.

Prime Minister Justin Trudeau confirmed the meeting, but provided no further details on exactly what he plans to talk about with Punjab Chief Minister Amarinder Singh.

The meeting comes amid simmering tensions between India and Canada about the demands in some Sikh communities for an independent state called Khalistan. Indian government officials want Trudeau to be firmer in clamping down on separatist elements within Sikh communities in Canada, which they believe provide a platform for some to commit acts of violence to achieve independence.

Singh has been outspoken about the issue and has publicly accused several members of Trudeau's cabinet of being involved in Sikh separatist causes. Last April, he refused to meet visiting Defence Minister Harjit Sajjan because of it.

Sajjan has called Singh's accusations defamatory and ridiculous. Last week, as Trudeau prepared to leave Canada for his seven-day Indian state visit, a meeting with Singh was not in the offing, even though Singh had told Indian media he was to serve as Trudeau's tour guide during a tour of the Golden Temple in Amritsar this week.

On Trudeau's first full day in India, there was a change of heart and Sajjan was behind it, asking Trudeau to request a meeting with Singh for both of them.

As it currently stands, Sajjan is not part of the meeting, though details are still being worked out on that front, Trudeau said in Mumbai on Monday.

The dispute is largely a disagreement over freedom of speech. Indian officials want Trudeau to clamp down on movements within Canada pushing for an independent Sikh state. While Trudeau has been firm that Canada's policy is for a united India, he will not step in to tell people what they can say, as long as they do not advocate violence.

"I think people know that I defend Canada's values and Canadian interests and diversity of views in Canada is extremely important to me and will always remain that way," Trudeau said.

Rohinton Medhora, president of the Centre for International Governance Innovation in Waterloo, Ont., is in India to participate in some of the business and trade events associated with Trudeau's visit. He said Monday the Khalistan issue is a tough for one for Canada and India to navigate, but does not believe it hurts trade.

"It's big for some people, but I don't think it's a big issue in terms of the economic and political relationship between the countries," said Medhora.

Trade between Canada and India has grown more slowly than hoped. It reached $8 billion in 2016, far shy of the goal of $15 billion by 2015 set by the former Conservative government.

Trudeau himself pointed out Monday in a question-and-answer session with students at Ahmedabad's Indian Institute of Management that the number is small compared with the $2 billion in daily trade between Canada and the U.S., but said this trip is designed in part to encourage growth.

Medhora said the biggest barrier to increased Canada-India trade is the fact that India used to be very closed to external investment and trade and when it started to open up, Canada was slow to jump in.

"Ultimately these two countries and their businesses don't know each other," said Medhora. "They have to understand each other and that's what's going to make the trade grow. Free trade deals are nice to have but not necessary for trade to grow ."

He said there are a number of areas where both countries need each other. Notably India is a big market for Canada for farm products, particularly lentils and chickpeas, as well as for uranium. India also needs Canadian expertise to help with energy security.

The agriculture issue is another bilateral irritant, as India slapped import tariffs of 50 per cent on peas and 40 per cent on chickpeas in the last two months. The tariffs hurt Canadian pulse crop producers by virtually eliminating India as a market.

Trudeau said Monday he raised that issue with Indian Prime Minister Narendra Modi when they met at the World Economic Forum in Switzerland in January. It was also the first thing he mentioned after landing in India on Saturday, when he told the minister of state for agriculture who greeted him that he looked forward to talking about the pulse crop issue in the days to come.

Trudeau was welcomed warmly as he spent most of Monday in Modi's home state of Gujarat.

Throughout the city of Ahmedabad, billboards and banners with Trudeau's and Modi's photos and the slogan "Long Live India-Canada Friendship" lined the motorcade route.

Trudeau — who visited the home of Mahatma Gandhi and a Buddhist shrine while in the city — is the first Canadian prime minister to visit Gujarat and some Indian reporters said they had never seen anything quite like the billboards erected for his arrival. 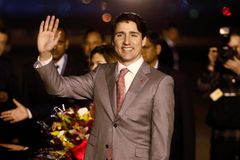 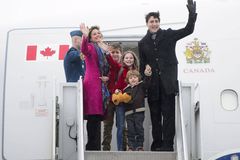