Prime Minister Justin Trudeau has told U.S. President Donald Trump he wants to finish the renegotiation of the North American free-trade agreement by the end of 2017, putting Canada on the same page as the United States on the timeline for talks.

The two leaders spoke by telephone on Thursday, on the eve of the second round of NAFTA talks, which begins on Friday in Mexico City. The call came after a week of repeated threats from Mr. Trump to pull out of the deal, and accusations from the President that Canada and Mexico are being "very difficult" at the negotiating table.

A White House summary of the call said Mr. Trump and Mr. Trudeau "stressed their hope to reach an agreement by the end of this year" on NAFTA.

Explainer: Could Trump really pull the U.S. out of NAFTA?

Both the United States and Mexico are eager to reach a quick deal on NAFTA, but Canada has so far been ambivalent.

Two officials, speaking on condition of anonymity, said the prevailing view in Ottawa is that if the negotiation drags on a long time and the result is that nothing changes in NAFTA, this would be a good result for Canada. One of these officials, however, said there is a minority view that it would be good to finish negotiations quickly simply to have them out of the way.

Mr. Trump wants the negotiations done fast to fulfill a key election promise. Mexico, for its part, wants to avoid the process interfering with the country's presidential election next year.

NAFTA's junior partners have taken opposite approaches to Mr. Trump's renewed attacks on the deal in recent days.

Two Mexican cabinet ministers and the country's top trade official told Trump administration officials on Wednesday that they have to get the President to stop bashing Mexico on Twitter if he wants to reach a deal on NAFTA.

Foreign Minister Luis Videgaray also told reporters in the U.S. capital that Mexico would walk away from talks if Mr. Trump triggered the process of withdrawing from NAFTA, as he has threatened to do in order to put pressure on the other two countries.

Canada, by contrast, has tried to play it cool. The summary of Thursday's telephone call released by the Prime Minister's Office did not even mention NAFTA, saying only that Mr. Trudeau had offered Mr. Trump Canadian help dealing with the aftermath of Tropical Depression Harvey.

Dealings with Mr. Trump are much more politically volatile in Mexico, which has been the prime target of his ire since launching his presidential bid more than two years ago.

In addition to accusing Mexico of taking American factory jobs under NAFTA, Mr. Trump has portrayed Mexico as a lawless country, from which criminals and illegal immigrants are pouring over the United States' southern border.

Such assertions are highly questionable: The number of undocumented immigrants in the United States is believed to have remained the same for the past decade, suggesting there are not many people heading to the U.S. illicitly.

Over the past week, Mr. Trump has repeated these accusations and suggested he will use NAFTA as leverage to get Mexico to pay for his promised wall on the border, which Mexico has said it will never do.

The harsher the President's rhetoric, the more difficult it is for Mexico to give him anything at the bargaining table for fear of appearing weak to Mexican voters. The situation is even more sensitive as the governing Institutional Revolution Party faces an uphill battle to hold on to the Mexican presidency next year against a leftist former mayor of Mexico City and NAFTA critic, Andres Manuel Lopez Obrador.

In frank comments on Thursday, Economy Minister Ildefonso Guajardo said Mexico must contemplate a "Plan B" in which the United States pulls out of NAFTA and leaves his country and Canada to go it alone.

"You can never rule out any scenario," Mr. Guajardo told an audience at his alma mater in Monterrey, according to news magazine Proceso. "The possibility that one of our members decides not to stay, you cannot rule out, however high or low the probability."

Mr. Guajardo said his country had to explore all of its options, including pursuing alternative trade deals around the world.

The three countries are far apart on some hot-button issues on the table. The United States has said it wants to impose an American content requirement on products made in the NAFTA zone, which the other two countries have rejected. The U.S. is also seeking to gut the Chapter 19 mechanism for resolving trade disputes; Canada has said it would abandon negotiations if the United States presses this demand.

Mr. Guajardo was quoted on Thursday as saying there are "four or five" topics on which the sides significantly disagree and have been set aside for later. Another 25 subjects are under negotiations and he expected a further 10 would soon be added to that total.

Mexico warns Trump to back off of NAFTA withdrawal threat
Subscriber content
August 30, 2017 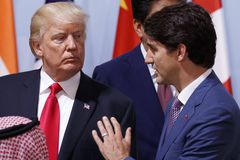