The federal government will "review and monitor" its revised employment insurance program that critics argue unfairly benefits only a dozen regions in Canada.

Prime Minister Justin Trudeau made the pledge Tuesday in Calgary – one of the cities where residents will be eligible for the more generous EI benefits. He refused to say whether that meant other regions where unemployment has spiked could be added to the list of 12.

The Liberal government in its budget last week revamped EI benefits to address the climbing unemployment rate that has accompanied the collapse in energy prices. Some areas, such as Edmonton and swaths of Saskatchewan, did not make the cut, prompting politicians to question the policy.

"We'll continue to review and monitor as other regions of the country face greater [problems] or recover better," Mr. Trudeau told reporters Tuesday. "Reviewing and monitoring means exactly that – looking at how the programs and the significant help that we put out in this budget, not just for the hard-hit areas, but for the entire country, actually translates into better jobs and better opportunities for Canadians."

People complaining that their regions were excluded, even though they live in areas that are suffering as a result of the commodity slump, should be relieved, Mr. Trudeau said.

"I think that both people in Edmonton and Saskatchewan should be pleased that they are not hit as hard as other parts of the country," he told Global News in Calgary.

Alberta's jobless rate clocks in at 7.9 per cent, the highest in 20 years.

Finance Minister, Bill Morneau, faced questions of his own about unequal treatment in the employment insurance program as he was travelling in Quebec to promote budget measures.

While unemployment rates in Saskatchewan and Alberta have spiked, they have only recently started to rival those of Quebec, New Brunswick and other chronically slow-growing areas. Montreal, which is not among the 12 areas getting an EI boost, still has a higher unemployment rate than Calgary.

"The 12 places that were chosen were chosen specifically because they were regions identified with sustained higher unemployment. We've come to that conclusion based on the places most adversely affected by the change in the economy," Mr. Morneau said.

Mr. Morneau said other changes to the system will help all unemployed Canadians, such as shortening waiting times and making it easier for people to get into the system.

The 12 regions that will benefit from the EI changes are Newfoundland and Labrador, Sudbury, Northern Ontario, Northern Manitoba, Saskatoon, Northern Saskatchewan, Calgary, Northern Alberta, Southern Alberta, Northern British Columbia, Whitehorse and Nunavut. The government said the jobless rate in these regions climbed by at least two percentage points between March, 2015, and February, 2016, compared with their lowest mark between December, 2014, and February, 2015. They also lack notable signs of recovery, budget documents said.

The revised EI rules extend benefits by five weeks, from 45 to a cap of 50 weeks. People who have made significant contributions to EI but have not drawn heavily on the system will be able to access benefits for up to 70 weeks, up from a maximum of 50.

The new system, designed to last about a year, begins in July and is retroactive to January, 2015. The Liberals' EI and training plan will cost more than $1-billion. Canada's total EI expenses will therefore climb to about $21.1-billion in the next fiscal year.

Key Trudeau promise to help jobless youth left out of federal budget
May 16, 2018 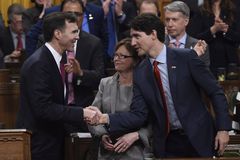 Alberta, Saskatchewan baffled by omissions for extended EI benefits
May 16, 2018