Trudeau Year One: Shrewd symbolism and flair brought him further than anyone expected

Justin Trudeau makes his way to the stage with wife Sophie Grégoire Trudeau at Liberal Party headquarters in Montreal on Oct. 20, 2015, the day after the Liberals swept to power in the federal election.

One year since the election, the PM has had many opportunities to stumble, though his popularity has only increased. But improving indigenous relations and his pledge to grow the middle class are major hurdles his government has yet to overcome, Campbell Clark writes

There's an inside joke in Justin Trudeau's government: "This is going to be the first real test." It's a wink at the oft-written warning that Mr. Trudeau's popular government is finally facing the challenge that will pop the bubble. It was such fun that PMO staffers had interns count up more than 80 "first real tests."

Mr. Trudeau's plan to withdraw CF-18 fighters from air strikes on Islamic State was a challenge for relations with allies. The Paris terror attacks might have shaken the resolve to resettle 25,000 Syrian refugees. Slow growth ballooned the deficit. A court deadline forced the passage of a bill legalizing assisted suicide. There was nannygate, elbowgate and aides' relocation expenses.

But Mr. Trudeau has proved more resilient than anyone expected.

It has been a year now. Mr. Trudeau's Liberals are more popular, not less. It is almost unprecedented.

But turn back to a year ago and no one really expected this Prime Minister Justin Trudeau.

Mr. Trudeau makes his way from Parliament Hill to the National Press Theatre in Ottawa the day after the 2015 election.

Justin Trudeau the campaigner ran on making the economy roll again, wearing a hard hat at campaign stops and promising big infrastructure programs so voters would see a picture of construction cranes in the skyline.

Instead, the single biggest issue that has taken up Team Trudeau's time, attention and political calculus is one that sat on page 38 of the Liberal platform, climate change. From the first premiers meeting and Paris summit, a federal-provincial deal on greenhouse gas emissions, and the approval of an oil pipeline, have been on top.

But undeniably, Mr. Trudeau has put the first real tests behind him – and revealed unexpected things about how he'll face the next ones.

In August, on his first official visit to Beijing, Mr. Trudeau deliberately undersold the gifts he brought for Chinese President Xi Jinping and Premier Li Keqiang: two medallions bearing the image of Canadian doctor Norman Bethune, still a hero in China for tending Maoists fighting the Japanese in the 1930s. And, Mr. Trudeau noted, they were part of a limited run struck in 1973 and presented by Pierre Trudeau to Mao Zedong.

Canada’s gift to China – a Norman Bethune medallion made in the same run as one presented by my father here in 1973. pic.twitter.com/NfEkEqJO0g

This was symbolism. Conservatives might choke on the Mao connection. But in Beijing, it tugged on sensitive chords in Chinese culture: layers of history, filial ties and respect for long-term relationship-building. It was no accident.

By now, Canadians have seen Justin Trudeau's instinct for symbols. On the day he was sworn in, it was the "Because it's 2015" answer for why he chose a gender-balanced cabinet; in December, he was waiting at Toronto's Pearson airport for the first plane of Syrian refugees.

They are carefully planned. Most people don't connect with policy; symbols represent something – gender equity, or welcoming refugees. "We don't do photo ops," one aide said. "We do symbols."

There is careful sequencing. Mr. Trudeau's ministers were given 300 tasks in mandate letters – but launched consultations, delaying decisions, on more than a hundred. Finance Minister Bill Morneau's first budget pointedly omitted figures for future health-care transfers to provinces – that would have meant conflict with premiers, and the Liberals wanted progress on climate and pensions first.

In office, Mr. Trudeau changed the PM's script. He kept up wading into crowds across Canada, travelling 78 days in Canada in the first nine months of 2016, compared with 77 work days in Ottawa, according to his office. He is spokesman and CEO, trying to connect outside the Ottawa bubble.

But the unscripted politician has gone surprisingly quickly. He once objected to politicians "spun and scripted within an inch of their life," but now his news conference answers are rote talking points.

Mr. Trudeau is mobbed by admiring members of the media as he leaves his closing press conference following the APEC Summit in Manila on Nov. 19, 2015.

"It was like going to Cannes, or TIFF," one diplomat said privately. The "it" was the September opening of the United Nations General Assembly, a once-a-year event that attracts world leaders to New York. Mr. Trudeau was the star, so other Canadian officials were in demand, too.

It started with Filipino women screaming at the APEC summit last November. U.S. President Barack Obama invited him to a March state dinner; other leaders piled up invitations.

"He gets some teasing about his international celebrity, but that really misses the point," said Roland Paris, who served as Mr. Trudeau's foreign policy adviser in his first months in office. "When people, including other leaders, want to meet with him, hear what he says, to be seen with him, that's an instrument of influence."

In the time of Donald Trump and Brexit, Mr. Trudeau is hailed abroad as contrast: promising "inclusive" growth, promoting diversity, trade and internationalism.

Another surprise: A politician portrayed as callow proved a confident summiteer, tested at four summits in his first six weeks. He was inexperienced, but not awestruck; he'd met world leaders as a child.

Mr. Paris was impressed by Mr. Trudeau's ability to distill information, draw conclusions, decide what points matter – and get them across in "diplomatic speed-dating" encounters. "He can communicate tough messages, too. I've seen him do that," Mr. Paris said.

Mr. Trudeau smoothed over the withdrawal of Canadian jets from Islamic State strikes by sending more trainers. He reset relations with major trading partners in the United States and Mexico. He made China a generational priority, but sought to bring public opinion along in steps. China eased a canola trade dispute, and released Canadian missionary Kevin Garratt from jail – and Mr. Trudeau's concessions included talks, but just talks, on an extradition treaty.

Year One gave Mr. Trudeau a global stage, and he used it to reset Canada's relationships. The next tests mean defining direction.

A look back at the original Trudeaumania 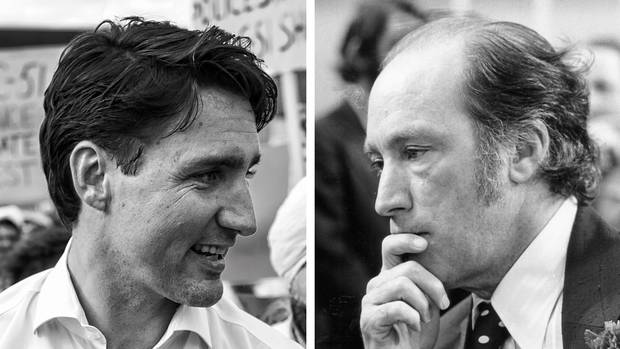 Evan Annett explores how Justin Trudeau’s first 100 days in office stack up against his father Pierre’s in 1968.

Is this Trudeaumania again? No. "After six months of Pierre Trudeau, people were rather tired of him," biographer John English said. "Maybe not tired, but they fell into the opposition camp."

Not with Justin Trudeau. His election let loose pent-up demand for change – support shot up after voting day, and has mostly drifted higher since, pollster Nik Nanos said. Mr. Nanos warned it's not real: Leaderless opposition has left little alternative.

The last PM who rode high for a year was Jean Chrétien, who faced fractured opposition. But his first year was known for inaction.

Mr. Trudeau's government has been active and taken risks. It resettled 25,000 Syrian refugees. It overturned two decades of Canadian political wisdom with a spending budget and a $30-billion deficit.

The Liberals ticked off promises from Chapter One of their platform – tabling a middle-income tax cut and establishing the Canada Child Benefit for lower-income parents.

And they scored an unexpected coup: A vague promise to work with provinces to "enhance" the Canada Pension Plan turned into a surprise June deal that once seemed impossible, given differences over raising premiums. But Mr. Morneau used Ontario's threat to create its own expanded pensions to bring provinces to a compromise.

The first real tests are in the rear-view mirror. But the big, knotty political challenge of his mandate remains what he said it would be: growth for the middle class.

Now the problem isn't so much spreading benefits as growth itself. It took the Liberals eight or nine months to hammer out the infrastructure funding deals with the provinces, so the idea of a quick economic jolt faded.

"Innovation" is a buzzword, but there's no policy yet. A growth council yet to recommend policies. Growth policies were left to year two.

Mr. Trudeau set other tests that won't be quickly passed. A promised new relationship with indigenous peoples was started with the symbols of an inquiry into missing women, new access to government leaders and an "unprecedented" $8.4-billion in the budget, the Assembly of First Nations national chief said. But already some chiefs wonder why their communities haven't yet seen the money, he added.

From the archives: Trudeau emphasizes listening to indigenous communities

The biggest surprise was Mr. Trudeau's drive to pull off an ambitious political balancing act on climate change and Alberta oil. His promise to both strike a deal with provinces to reduce greenhouse gas emissions and get Canadian oil to export markets was ridiculed as the convenient fantasy of a campaigning politician. But in office, he has assembled pieces of a deal.

Behind the scenes, Mr. Trudeau's government built a close partnership with an Alberta NDP government that had promised the same political bargain, and allies in Ontario and Quebec. B.C.'s Christy Clark – whose co-operation is needed to sell approval of the Trans Mountain oil pipeline – won federal approval for a pet natural-gas project. With big provinces onside, Mr. Trudeau's October announcement that he will impose a carbon price lowers the boom on a few.

Now it comes to a head. Mr. Trudeau's government is rushing to sign a climate deal with most premiers Dec. 9 – less than two weeks before the deadline for approving the Trans Mountain pipeline. Both moments promise to set off a political chain reaction. Both will be of Mr. Trudeau's making. Few expected he'd ever put it to the test.

Read some of The Globe's in-depth profiles of Mr. Trudeau and the people in his inner circle.

From the archives: Canadians share their advice for Justin Trudeau