Justin Trudeau's interactions with the Aga Khan were "going to be a problem" whether they were friends or not, and the Prime Minister almost certainly would have been advised not travel to the spiritual leader's private island had he asked, former ethics commissioner Mary Dawson said on Wednesday.

Ms. Dawson, who retired from her post on Monday, testified for two hours at a special meeting of the House of Commons ethics committee, where Liberal MPs defeated another Opposition attempt to invite Mr. Trudeau to answer questions about his ethical breaches.

The former watchdog was called in to discuss her December report that said the Prime Minister violated four sections of the Conflict of Interest Act when he and his family accepted trips to the Aga Khan's private island in the Bahamas.

Much of the committee meeting focused on the definition of a "friend."

The Conflict of Interest Act says gifts from friends are acceptable. Ms. Dawson said that should be removed and the test should be whether a gift can reasonably be seen to have been given to influence, regardless of relationships.

She urged those in a "position of power" to be careful in their dealings with friends with whom they also have a business relationship. In her report, Ms. Dawson rejected the Prime Minister's assertion that the Aga Khan was a close, personal friend because the two had spoken only twice in the past 30 years. At a town hall in Nova Scotia this week, Mr. Trudeau continued to use the defence.

Ms. Dawson also found Mr. Trudeau violated the Act when he failed to recuse himself from two meetings about a $15-million federal grant to the endowment fund of the Global Centre for Pluralism, founded by the Aga Khan, the billionaire spiritual leader of the world's Ismaili Muslims. He is also the founder of the Aga Khan Foundation Canada, which was registered to lobby the federal government at the time of the vacations.

Ms. Dawson testified that Mr. Trudeau's interactions with the Aga Khan would have been problematic whether they were friends or not.

"One way or another, there was going to be a problem," Ms. Dawson said.

When asked if she would have approved the trip had Mr. Trudeau approached her beforehand, Ms. Dawson said: "I probably would have said no, depending on the amount of information I was given."

In her report, Ms. Dawson ruled that the trips could be seen as a gift designed to influence the Prime Minister, although she also found no evidence Mr. Trudeau used his position to further the Aga Khan's private interests.

Liberal MPs who spoke at the committee portrayed the events as an "honest mistake," noting that the Prime Minister apologized, said he accepted Ms. Dawson's findings and committed to clearing all future vacations with the ethics office.

"[The Prime Minister] has a duty and a responsibility … to discuss and to be accountable to all the Members of Parliament," Mr. Kent said after the meeting.

NDP ethics critic Nathan Cullen said he wants to ask Mr. Trudeau why he continues to use friendship as a justification for his travel. "I don't know if Mr. Trudeau has learned, I honestly don't," he said. "Because he continues to use the same arguments that would lead him into a different place of trouble. And what has changed?"

Ms. Dawson told reporters after the meeting that Mr. Trudeau's violations are "unfortunate" for both him and the public. 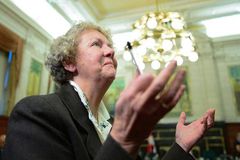