Talks to renegotiate the North American free-trade agreement could begin within weeks but a senior business adviser to U.S. President Donald Trump said there's no reason for Canada to be "enormously worried."

Stephen Schwarzman, who heads the President's strategic and policy forum and is the CEO of Blackstone Group, met privately with Prime Minister Justin Trudeau and also spoke to the full federal cabinet Monday in Calgary, where ministers are holding a two-day retreat.

Mr. Schwarzman leads a forum of CEOs representing some of the largest companies in the United States, including General Motors, IBM, Walt Disney and Wal-Mart. He said the Trump administration's trade concerns are focused on countries that have large trade imbalances with the United States and he said Mr. Trudeau shouldn't be concerned because that doesn't apply to Canada. "I don't think he should be enormously worried, because Canada is held in very high regard," he told reporters after his private meeting with cabinet. "I think trade between the U.S. and Canada is really very much in balance and is a model for the way that trade relations should be. … So I think Canada is very well-positioned for any discussions with the United States."

Read more: The pros and cons of leaving NAFTA behind

The positive message was welcome news to a nervous Liberal cabinet given that so much of the Canadian economy depends on open trade with the United States.

Though Canada's Liberal government holds starkly different political views from Mr. Trump on a wide range of issues, cabinet ministers are clearly eager to avoid a fight with the new President.

Trade Minister François-Philippe Champagne said it is a positive sign that a senior Trump adviser is well aware of the fact that Canada and the United States often manufacture goods together, with parts moving back and forth across the border.

"We share the understanding that not only do we sell to each other, but we make things together," he said, adding that it is great to have someone with that view at the "top of the pyramid" in terms of influence with the new administration.

Employment Minister Patty Hajdu said the fact that the administration sent a senior envoy to the Canadian cabinet retreat was significant.

Ms. Hajdu, the former status of women minister, was asked if she had concerns working with a President who inspired millions of women to protest around the world on the weekend.

"We understand that other countries have different priorities and different focuses. That doesn't mean we're going to back away from our fundamental belief in gender equality," she replied.

White House press secretary Sean Spicer said Monday that the U.S. President would prefer to renegotiate NAFTA rather than tear it up. He said Mr. Trump would be meeting with Mr. Trudeau and Mexican President Enrique Pena Nieto in the coming weeks to discuss a renegotiation.

Various proposals for new import tariffs or border taxes have been floating around Washington since Mr. Trump's election victory, but Mr. Schwarzman suggested Canada may be exempt from such measures.

"I think one of the things the U.S. is looking at is a potential border tax, which I think if you're in NAFTA is a good place to be," he said, suggesting a border-tax exemption would likely be part of any discussion to renegotiate the North American free-trade agreement.

There had been discussions about the possibility that Jared Kushner, Mr. Trump's son-in-law and senior adviser, would be meeting with the Canadian federal cabinet on Tuesday. However a government official said the plans ultimately fell through.

Cabinet also heard Monday from Dominic Barton, the McKinsey global managing partner who heads Finance Minister Bill Morneau's advisory council on economic growth. The council is expected to release a series of reports shortly that will focus on recommendations for improving innovation in Canada.

"We're focused this morning on the Canada-U.S. relationship. You've seen that my long-time good friend Steve Schwarzman is going to be here, talking to us, together with the friend of all of ours, Dominic Barton, about that relationship, particularly the economic relationship and that's the conversation we're looking forward to having this morning," she said on her way in to the meeting.

Ms. Freeland declined to address comments made Sunday evening by David MacNaughton, Canada's ambassador to the United States, who suggested future trade deals with the United States may not include Mexico.

Asked Monday by a reporter whether Canada was throwing Mexico under the bus, Ms. Freeland said NAFTA remains important to Canada.

Trump presses ahead with plans for closer ties with Israel, speaks with PM
January 22, 2017 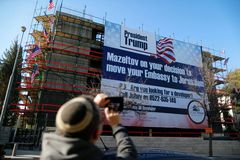 Trump withdraws from TPP, but offers Canada hope on NAFTA
January 23, 2017
Follow Bill Curry on Twitter @curryb
Report an error Editorial code of conduct
Due to technical reasons, we have temporarily removed commenting from our articles. We hope to have this fixed soon. Thank you for your patience. If you are looking to give feedback on our new site, please send it along to feedback@globeandmail.com. If you want to write a letter to the editor, please forward to letters@globeandmail.com.
Comments