Americans got to witness a Canadian visitor this week immersed in an activity his nation prides itself on having mastered: Stickhandling. The person performing the pivots was Prime Minister Justin Trudeau.

The subject he skated around: Donald Trump.

The prime minister was asked repeatedly during his visit to New York this week and in Washington last week what he thinks of the Trump phenomenon.

It happened at the White House; at the UN; in front of a business audience; and Thursday in a Lower East Side New York deli where two men dispirited by the state of American politics dropped to their knees and jokingly begged Trudeau to run for president.

"I have tremendous confidence in Americans' capacity to get the right result through their electoral system," he told a business audience Thursday, echoing previous responses.

"I think we're going to see what Americans are made of in this upcoming election."

He told the people in the deli that he couldn't — as a Canadian. They replied that being born in Canada hadn't stopped Sen. Ted Cruz. Trudeau noted one significant difference with the Republican contender: Cruz is an American citizen.

He curtly told a news conference at the United Nations on Wednesday that he had faith in the better angels of Americans' nature, paraphrasing Abraham Lincoln.

Later, he alluded to the U.S. election before a high-powered crowd. After receiving an award from a women's group at the Waldorf Astoria hotel, he said the reason he was able to introduce progressive policies like a gender-parity cabinet and welcoming refugees was because his approach won with voters.

"As much as I was able to do, and my government was able to do, we only did it because Canadians made a choice: to choose a more open, fair, positive way of doing politics," he told the ballroom crowd, which included the heads of McDonald's, Campbell Soup, Shell, and the Carnival Corp.

He added, dryly: "That is certainly something that I hope resonates through political systems around the world."

That last line prompted laughter and perhaps his loudest applause of the evening — louder even than his references to the gender-parity cabinet, which is why he was invited to the gala and given the award from the women's group Catalyst.

Amid the claps, he added: "I'm not thinking of any place in particular!"

Several former Canadian ambassadors to the U.S. have publicly warned the prime minister not to talk about the U.S. election, saying it would be a mistake to turn Canada into an issue in a messy campaign.

He was asked again there about what he would do if Trump becomes president.

Trudeau replied that he understood why people were angry in many countries about the current political and economic systems and explained that he's working on democratic reforms and economic policies aimed at empowering frustrated voters.

With respect to a president Trump, he said he'd work on areas where they shared common ground. The interviewer pressed him — what possible common ground could the Canadian progressive find with an American Republican talking about walls and ripping up trade deals and banning Muslim visitors to the U.S.?

There appeared to be another reference to the U.S. election on Wednesday during his meeting with Laurence Fink, the powerful head of world-leading asset manager BlackRock.

"I think the opportunity for Canada in the short run is good," Fink said.

"A lot of confusion here in this country in investing. There's probably even greater opportunities in the stable environment of Canada."

Most of the leading presidential candidates have opposed the new Trans-Pacific Partnership trade deal, and Trump has also spoken about cancelling NAFTA.

Trudeau praised for his efforts to create gender equality
March 16, 2016 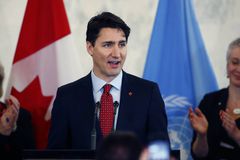 What should the world do about Trump?
Subscriber content
March 16, 2016 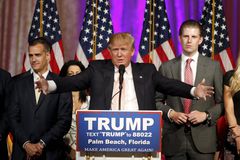