Republican presidential candidate Donald Trump is doubling down on a threat to quit NAFTA if he wins in November, vowing to seek a "total renegotiation" of the free-trade deal with Canada and Mexico, and to withdraw from the agreement if he cannot obtain the terms he wants.

Even as the celebrity businessman tried to soften his anti-trade image during a speech to a Detroit business audience on Monday, he made it clear he was not moderating his protectionist stand before the election.

He acknowledged "isolation is not an option" for the United States, but spoke even more aggressively about resuming bargaining on all aspects of the North American free-trade agreement, which has been in force for more than two decades.

"A total renegotiation," is what Mr. Trump told the Detroit Economic Club he wanted from NAFTA. "If we don't get a better deal, we will walk away."

The chief targets of his ire on Monday were China and Mexico – Canada did not rate a mention – as the Republican candidate railed against trade deficits generated by Americans buying far more from the Chinese and Mexicans than they sell to them.

"Americanism, not globalism, will be our new credo," Mr. Trump said.

The Trump pledge, nevertheless, is a potential danger for Canada, which has enjoyed a preferential economic relationship with its most important trading partner since late in the presidency of Ronald Reagan. Canada and the United States exchange more than $2.4-billion in goods and services each day, and Canada is the top export destination for 35 U.S. states.

Trade experts are divided over what would happen if the United States were to exit NAFTA. Some say the 1988 Canada-U.S. Free Trade Agreement, which the three-partner NAFTA deal superseded in 1994, would take hold once again. Others say the Canada-U.S. deal is now defunct, and that Canada, bereft of any special access to the U.S. market, would have only the multinational General Agreement on Tariffs and Trade, the 1990s deal that formed the World Trade Organization, as a shield against protectionism.

"There's no blueprint for this because it is just not done," Laura Dawson, director of the Canada Institute at the The Woodrow Wilson International Center for Scholars, said of withdrawing from a major trade deal.

What is certain, however, is that Canada-U.S. trade relations are in for a rough ride regardless of whether Mr. Trump or his Democratic rival, Hillary Clinton, is elected to the White House in November.

Both major presidential candidates, responding to serious undercurrents of dissatisfaction in the U.S. population, have come out against the Trans-Pacific Partnership accord, a major Pacific Rim trade deal negotiated by President Barack Obama.

Mr. Trump's campaign team sent reporters a summary of the highlights of the speech in Detroit, including what appears to an expression of the candidate's backing for Keystone XL. "Ask TransCanada to renew its permit application for the Keystone pipeline," the Trump speech summary said.

The speech as delivered on Monday, nevertheless, failed to include any mention of the Keystone XL project.

Mr. Trump did, however, try to qualify his anti-trade reputation. "Trade has big benefits, and I am in favour of trade. But I want great trade deals for our country that create more jobs and higher wages for American workers. Isolation is not an option, only great and well-crafted trade deals are," he said.

Derek Burney, a former Canadian ambassador to the United States, said he sees "no reason for panic" or "dire predictions" as a result of Mr. Trump's determination to stick with this campaign pledge. In a worst-case scenario, he said, the U.S. administration most likely would try to renegotiate NAFTA first. "They could serve six months' notice of intent to withdraw, as the agreement permits, but I would assume any action of this kind, including abrogation, would require some degree of Congressional support."

A CNN poll on Monday based on six other polls suggested Mr. Trump is 10 points behind Ms. Clinton at the moment.

Canada's department of Global Affairs, which is responsible for negotiating trade deals, declined to answer what kind of trading relationship this country would have with the United States if Mr. Trump were able to take the United States out of NAFTA.

Instead, Ottawa defended the North American trade deal in a statement.

"We look forward to a productive relationship with whomever the American people decide to elect in November," Global Affairs spokesman John Babcock said.

"Canada believes NAFTA is in the best interest of our three countries and we are focused on deepening our trading relationship. … ‎Co-operation through NAFTA has created a North America where Canadian, American and Mexican companies do more than make and sell things to each other; now, our companies increasingly make things together." 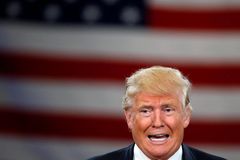 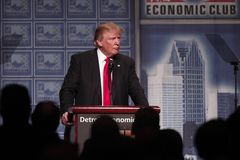 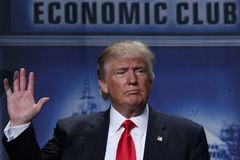