The Canadian government pitched the idea of promoting female business leaders to President Donald Trump's team as a way of finding common ground with the new U.S. administration on the Prime Minister's first trip to Washington.

Prime Minister Justin Trudeau's chief of staff, Katie Telford, came up with the proposal to hold a roundtable with businesswomen from both countries during Mr. Trudeau's White House visit, two senior government officials told The Globe and Mail. The two leaders then launched a joint initiative to empower women-owned businesses, contribute to economic growth and enhance the integration of the two economies.

In proposing the plan, Ottawa involved one of the President's most trusted confidantes: his daughter, Ivanka Trump. In recent weeks, Ms. Trump has acted as a quasi-first lady while her stepmother, Melania Trump, remains in New York. The creation of the council and his daughter's involvement could help Mr. Trump's image: Mr. Trudeau is a self-proclaimed feminist, while millions of women around the world protested in the streets the day after Mr. Trump's inauguration.

What you missed from Trudeau's first meeting with Trump

The Trump administration quickly came on board, the officials said, as did Ms. Trump, who will play a leadership role on the United States-Canada Council for Advancement of Women Entrepreneurs and Business Leaders.

Ms. Trump, 35, moved to Washington from New York with her family last month. At Monday's roundtable, which lasted about 35 minutes, Mr. Trudeau was seated next to Ms. Trump, who has spoken in the past about her desire to promote female leaders and assist working mothers.

During the presidential campaign, Ms. Trump gave a speech at the Republican National Convention introducing her father where she cast Mr. Trump as a champion of equal pay for women.

Ms. Trump's poise and devotion to her father have turned her into a key surrogate with the ability to soften Mr. Trump's often rough edges. Ms. Trump also helped shore up her father's standing with some female voters, particularly after the release of a 2005 video in which he boasted in lewd terms about groping women.

After the roundtable, Ms. Trump tweeted a picture of herself, her father and Mr. Trudeau in the Oval Office. "A great discussion with two world leaders about the importance of women having a seat at the table!" she wrote.

At a joint news conference after the meeting, Mr. Trump spoke of the "full power" of women in the economy.

"We must work to address the barriers faced by women and women entrepreneurs, including access to capital, access to markets, and very importantly, access to networks," Mr. Trump said.

Mr. Trudeau said "ensuring equal opportunities for women in the work force is essential for growing the economy and maintaining American and Canadian competitiveness on the world stage."

Monday's meeting also provided a welcome change of topic for Ms. Trump, whose role as an entrepreneur has sparked controversy. Last week, the department store Nordstrom said it was dropping Ms. Trump's line of apparel and footwear due to poor sales. The President lashed out against the department store on Twitter while a senior aide, Kellyanne Conway, urged television viewers to buy Ms. Trump's products.

Last month, Ms. Trump hosted a dinner with female chief executives and media figures, reportedly to canvass their ideas on women's policy issues. Helping to organize that dinner – as well as Monday's roundtable – was Ms. Powell, until recently the head of the philanthropic arm of Goldman Sachs.

Ms. Powell served in the administration of president George W. Bush and launched the "10,000 Women" program while at Goldman Sachs, an effort to support female entrepreneurs around the world. Last month, Ms. Powell was named an assistant to the President and a senior counsellor for economic initiatives.

The council announced Monday will be made up of 10 female executives – half from Canadian companies and the other half from American companies.

The Canadian members include CEOs Annette Verschuren, of NRStor Inc., Dawn Farrell of TransAlta Corp., Linda Hasenfratz of Linamar Corp. and Tina Lee of T&T Supermarket Inc., as well as Monique Leroux, chair of the board of directors from Investissement Quebec.

"The advancement of women leaders and entrepreneurs is an area of alignment, clearly, between Prime Minister Trudeau and President Trump, and we spoke of the importance of developing women leaders, particularly, as it relates to manufacturing, and tech sectors, and other STEM-related industries," she said in an interview, referring to science, technology, engineering and mathematics.

"They were very much focused on the fact that job creation and infrastructure development are key cornerstones of both administrations' goals."

Ms. Verschuren told The Globe the meeting was an important icebreaker for President and the Prime Minister. "We talked a lot about talent and how to maximize the performance of women and how it would help the economy and different ways we could do that," she said. "And I thought we made a bit of progress in terms of [Mr. Trump] understanding the country a bit."

With reports from The Canadian Press, Josh O'Kane in Toronto and Shawn McCarthy in Ottawa 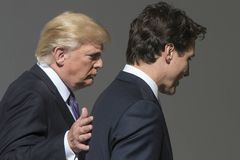 Trudeau, Trump vow to tighten energy ties, starting with Keystone
February 13, 2017
Follow Laura Stone and Joanna Slater on Twitter @l_stone @jslaternyc
Report an error Editorial code of conduct
Due to technical reasons, we have temporarily removed commenting from our articles. We hope to have this fixed soon. Thank you for your patience. If you are looking to give feedback on our new site, please send it along to feedback@globeandmail.com. If you want to write a letter to the editor, please forward to letters@globeandmail.com.
Comments