Even as he lauded his first conversation with the president-elect as a "strong beginning to what is going to be a constructive relationship," Mr. Trudeau ruled out abandoning a carbon tax that could place Canada at an economic disadvantage with the United States.

Mr. Trump is a climate-change denier, who has vowed to pull Washington out of the landmark Paris climate accord and eliminate the U.S. Environmental Protection Agency, and has pledged to promote the exploration and development of oil, gas and even coal.

Campbell Clark: Thanks to Trump, Trudeau's calculus on climate no longer adds up

He has said "the concept of global warming was created by and for the Chinese in order to make U.S. manufacturing non-competitive"

While stressing the importance of developing a strong bond with Mr. Trump, the Prime Minister insisted he is on the right side of history in advocating a strong environmental strategy, including a national carbon tax.

"One of the things people in Canada and indeed around the world understand is that there is tremendous economic disadvantage from not acting in the fight against climate change; for not pushing toward cleaner jobs and reducing emissions; toward not showing leadership at a time where the world is looking for leadership," Mr. Trudeau told reporters in Sydney, N.S.

Scientific reports track 2016 to be the hottest on record, surpassing the previous records set last year and in 2014.

Mr. Trudeau signed Canada on to the Paris accord, which commits 190 countries to cut carbon emissions to stave off global warming. Last month, he vowed to impose a national price on carbon-dioxide emissions beginning in 2018 and rising to $50 a tonne by 2022.

"We know that putting a price on carbon pollution is a way to improve our response to economic challenges, to create good jobs going forward and to show leadership that quite frankly the entire world is looking for," Mr. Trudeau said when asked if a carbon tax would hurt Canadian firms selling in the U.S. market.

Mr. Trudeau along with President Barack Obama and Mexican President Enrique Pena Nieto, adopted a broad North American climate and clean-energy strategy at a summit in Ottawa in June. That deal, including major reductions in methane emissions from fracking, is now dead in the water with Mr. Trump moving into the White House.

Gary Doer, the most recent former ambassador to the United States, said Mr. Trudeau needs to re-evaluate the government's bilateral climate-change policies. He suggested Ottawa could align itself with the Trump White House by pushing for an energy vision that includes use of natural gas, renewable energy, energy efficiency and a cleanup of the Great Lakes.

Mr. Trudeau was also asked at news conference what he would say to Canadians who are concerned that "a bigot, a sexist and a racist bully" is about to move into the White House.

"Canadians expect me to work with whomever Americans elect to be their president," Mr. Trudeau replied. "We are Canadians and we work hard to get along with people, we work hard to push our interests and that is exactly what I am going to do."

Mr. Trudeau had a brief telephone conversation with Mr. Trump Wednesday night where he congratulated the Republican president-elect on his victory over Democratic challenger Hillary Clinton.

"He expressed warmth toward Canada. I talked about how important the relationship is and I look forward to continuing to work to promote Canadian interests and indeed opportunities for all," Mr. Trudeau said.

Mr. Trudeau has issued instructions to cabinet ministers, MPs and staff to avoid any public criticism of Mr. Trump, whose views on immigration, refugees, climate change and trade are at odds with the Liberal government.

However, Gerald Butts, the Prime Minister's principal secretary, pointed to data suggesting that Mr. Trump didn't have that much of a political triumph. He sent out a tweet with statistics that showed Mr. Trump had less support than John McCain in 2008 and Mitt Romney in 2012 but Obama voters didn't turn out for Ms. Clinton.

"Mike Pence had a pretty good experience with Canada and was supportive of the Detroit-Windsor bridge. He was very active with the governors-premiers' meetings," Mr. Doer said. "Indiana is also a major trading partner with Canada."

Mr. Doer said Mr. Kelly has a deep understanding of border issues and worked co-operatively with the RCMP, including in the 2013 VIA rail terrorism plot. Two men were later convicted of planning to explode a bomb on a VIA train between Toronto and New York. 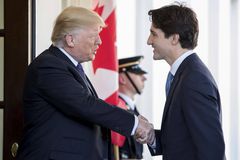 Ottawa to roll out new rules to cut Canadian carbon emissions
April 3, 2017
United Nations climate summit officials express concern about Trump victory
April 7, 2017
Follow Robert Fife on Twitter @RobertFife
Report an error Editorial code of conduct
Due to technical reasons, we have temporarily removed commenting from our articles. We hope to have this fixed soon. Thank you for your patience. If you are looking to give feedback on our new site, please send it along to feedback@globeandmail.com. If you want to write a letter to the editor, please forward to letters@globeandmail.com.
Comments