Barefoot and wearing the required head covering, surrounded by jostling and shouting tourists, reporters and dignitaries, protected by Mounties and aggressive Sikh security men, Stephen Harper made his way Wednesday around the magnificent courtyard of the even more magnificent Golden Temple of Amritsar, holiest of shrines to the world's Sikhs.

Although Sikhs make up only 2 per cent of India's population, they are the largest of Canada's Indo-Canadian communities, concentrated in key swing ridings in the suburbs of Toronto and Vancouver. For domestic consumption, Mr. Harper's visit to Amritsar matters politically. But the Prime Minister's travels carry a more important message - about the need for Canada's public and private spheres to engage with a wider world beyond North America and Europe, and with the increasingly diverse nation within.

Mr. Harper left for Canada late Wednesday, having visited both Hindu and Sikh holy sites, and having met with a who's who of Indian political and business leaders. The trip was an unqualified success, the culmination of efforts stretching back years to raise Canada's profile among those who count in the political and business communities.

"There is a lot of goodwill now," said one Indo-Canadian business leader who accompanied the Prime Minister on the trip. "The question now is what gets done with it."

Translating goodwill into trade dollars is no easy thing. Canada faces major obstacles in maximizing its potential stake in the Indian market. Some of those obstacles are external, but our country does a good job of letting its own best assets languish.

Signing an agreement quickly that would open the Indian civil nuclear market to Canadian technology is the first step, both for the business opportunities it presents and as a test of the seriousness of Canada's intentions. Do we want to sell uranium and build reactors in a country with nuclear weapons that refuses to sign the Nuclear Non-Proliferation Treaty? Unless the answer is "sure," the renaissance of Indo-Canadian relations will be dead at birth.

The next challenge comes in two weeks, when Mr. Harper returns to this hemisphere for a visit to China. The Indian media are filled with questions and outright denunciations of this week's trip to China by U.S. President Barack Obama. India is deeply suspicious of its Chinese rival.

Mr. Harper will have to tread carefully as he seeks to expand Canada's access to Chinese markets without undermining this week's good work in India.

Then there are the limitations we impose on ourselves: As one observer noted, Indo-Canadians are mostly CEOs of companies they created themselves. The old guard of Canada's business elite is European; like all minorities, Indo-Canadians struggle to make it into the rooms that matter. But Canada's businesses need them in those rooms, if trade between Canada and India is to have any hope of really taking off.

Canada's government needs new blood too. But the public service's bilingualism requirements conspire to send white public servants with no grasp of Hindi or Punjabi or Mandarin to staff our Asian embassies and trade missions, while a vast pool of Indian and Chinese Canadians remains untapped.

We lose out on their skills, their connections, their intimate knowledge of the culture they or their parents emigrated from. And Ottawa's resistance to recruiting outsiders with expertise directly into the senior ranks of the mandarinate leaves it flailing to master Asian intricacies while the very Canadians who have Asia in their bones look on in frustration or, worse, indifference.

The Conservative government's new guidebook for immigrants seeking citizenship may well be a robust introduction to our past and our ways. Now who will write the book that indoctrinates those of us whose last names contain "Mc" or "O'" or "son" about the new, Pacific-oriented, Asian-centric population that is emerging, but not yet fully integrating, with the old stock?

Many of us may need such instruction if we are to understand, let alone exploit, the potential of these ancient lands, these new worlds.

"This trip is, in a sense, the culmination but also the jumping-off point," Mr. Harper told reporters yesterday. But if this effort fizzles, then it will have been worse than a waste of time.

Still, it's a good thing that Stephen Harper returned to Ottawa with the dust of Amritsar on the soles of his feet.

Visit wraps up with chaotic tour of temple
November 18, 2009 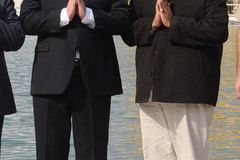