Canadian officials worked with their Turkish counterparts to secure the safe passage of two Canadian citizens across the Syrian border after a botched attempt to reverse an alleged child abduction.

A senior Canadian government official, who spoke to The Globe and Mail on the condition of anonymity, said Jolly Bimbachi and Sean Allen Moore met with Canadian officials in Turkey on Monday after returning from three weeks in Syria. Ms. Bimbachi and Mr. Moore, both from Chatham, Ont., had been working together in recent months to try to reclaim her two Canadian sons from their father, who allegedly abducted the children and took them to Lebanon.

Ms. Bimbachi said on Monday that she and Mr. Moore had crossed into Syria from Lebanon hoping to get her children to the Canadian embassy in Turkey, but were captured by militant group Hay'at Tahrir al-Sham, the BBC reported. She said they were then transferred to local government officials, who helped them get in touch with the Canadian government.

The official said Canada worked with Turkey to allow Ms. Bimbachi and Mr. Moore through the border with Syria, which is normally closed. It's not clear when the crossing took place, but the official said they were notified of the Canadians' arrival in Turkey early on Monday morning.

Ms. Bimbachi's children, who are Canadian-Lebanese citizens, are believed to be back in Lebanon, the official said, but it's unclear how they got there. The official said Global Affairs Canada has been working on the boys' consular case, which it considers an abduction. Ottawa has raised the case with Lebanese authorities on multiple occasions.

One of Mr. Moore's friends said he travelled to the region to help Ms. Bimbachi find her children.

"He gave me a call shortly before Christmas saying he was successful in getting the kids out of there, and he was coming back to Canada and we would have lunch in January."

Mr. Bultje said he hasn't seen or spoken to his friend since.

A petition to bring the children home was posted online nearly two years ago after Ms. Bimbachi's two sons travelled with their father to Lebanon. A Twitter account in Ms. Bimbachi's name has made frequent appeals to Canadian cabinet ministers to do what they could to fulfill lawful orders to return the children.

Mr. Bultje, who volunteers to build houses in Haiti in his spare time, said he got to know Mr. Moore through a shared interested in serving charitable causes overseas. Two years ago, they journeyed to Iraqi Kurdistan together, he said, adding Mr. Moore has since frequently returned to the Middle East.

"He used to own a restaurant. He retired or quit that, and he has a little money to play with," Mr. Bultje said.

He added that Mr. Moore was not afraid to put himself at risk to try to help people in the Middle East.

"He heard about all the trouble in Iraq, all the refugees," Mr. Bultje said.

"It's wonderful when you can help people in desperate situations." 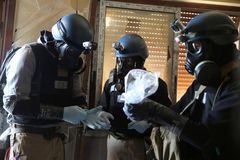 Follow Michelle Zilio and Colin Freeze on Twitter @michellezilio @colinfreeze
Report an error Editorial code of conduct
Due to technical reasons, we have temporarily removed commenting from our articles. We hope to have this fixed soon. Thank you for your patience. If you are looking to give feedback on our new site, please send it along to feedback@globeandmail.com. If you want to write a letter to the editor, please forward to letters@globeandmail.com.
Comments are closed