Two First Nations communities devastated by mercury poisoning nearly 50 years ago are still feeling the impacts from the metal toxins in one of their key water supplies, a world-renowned expert suggested.

Japanese doctor Masazumi Harada, who earned honours from the United Nations for his research into severe mercury poisoning known as Minamata disease, has produced a report saying similar conditions are still prevailing on the Grassy Narrows and White Dog Fist Nations near Dryden, Ont.

The two communities were ravaged by mercury poisoning starting in the 1960's when a local paper mill began dumping toxins into the English-Wabigoon River. Estimates suggest the Dryden Chemical Company mill deposited 10 tonnes of neurotoxins into the system between 1962 and 1970.

Dr. Harada made numerous visits to the communities as an expansion of research assessing the impact of mercury on fishing communities in Japan.

His most recent visit in 2010 yielded a report which was released in his home country last year and made available in English on Monday.

Dr. Harada found that of the 160 Grassy Narrows and White Dog residents he examined, 59 per cent were showing signs of ongoing mercury poisoning. Symptoms ranged from tunnel vision and loss of co-ordination to tremors and seizures.

Of those showing signs of poisoning, Dr. Harada said 39 per cent had symptoms severe enough to merit a diagnosis of Minamata disease.

Mercury exposure was prevalent even among those who had been born after the mill was barred from dumping its waste into the river in 1970, the report said. Of those between the ages of 21 and 41, 44 per cent showed signs of mercury poisoning.

The 2010 report was the latest in a series of studies Dr. Harada had conducted in the communities since his first visit in 1975, when he found residents of Grassy Narrows had internal mercury levels three times above the Health Canada limit.

People living in White Dog fared even worse, with levels more than seven times above the national guidelines.

For years, she said, she has witnessed friends and family members struggling with the symptoms associated with Minamata disease.

The condition has even wormed its way into a new generation, she said, adding she was personally galvanized into action after witnessing the births of numerous babies with brain cancer and other birth defects.

"That kind of gave me a red alert, kind of like when you're in a lull or asleep and all of a sudden something shocking happens," Ms. Da Silva said in a telephone interview.

"That's what first alarmed me ... there's still something here."

Ms. Da Silva said the community struggles daily with the fallout from the toxin dump. The English-Wabigoon River and the fish that live there are still highly contaminated, she said, adding local residents have been deprived of a key natural resource for decades.

The community has fought several high-profile battles to preserve the forests on its territory, picketing the provincial legislature on one occasion and successfully taking a junior gold mining company to court on another in an effort to halt development on its land.

"While our people suffer, Ontario has made plans to continue the destruction of our culture, livelihood, and health through another decade of logging in our forest against our will," Mr. Fobister said in a statement.

Mr. Fobister called on the Ontario government to apologize for the previous contamination, as well as put an end to logging on reservation land.

He also called for Health Canada to implement stricter mercury guidelines and fund an independent environmental monitoring centre on the reserve.

Ontario Aboriginal Affairs Minister Kathleen Wynne acknowledged ongoing environmental concerns in the area, adding the report could pave the way for a dialog between the province and the First Nation.

"Well, there's a consumption advisory on the fish still. What that says to me is that probably the fish shouldn't be eaten and I understand that it's painful to people in the community who want to eat that fish," Ms. Wynne said.

The subject was also raised in Ottawa when NDP aboriginal health critic Carol Hughes challenged previous assertions from the federal government about environmental conditions in the area.

In 2010, Greg Rickford, parliamentary secretary to the minister of aboriginal affairs, said the English-Wabigoon river system had been significantly cleaned up and was currently yielding untainted fish.

"The health and well-being of First Nations is a top priority for our government," he said.

"We continue to work with the Mercury Disability Board and the government of Ontario to support the work of the board in addressing the issue of mercury contamination." 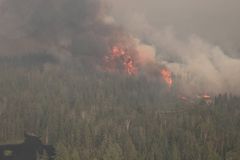