The United Arab Emirates abruptly ended years of collaboration with the Canadian Forces on Monday, forbidding Defence Minister Peter MacKay and his top general from even flying over the country on a return trip from Afghanistan.

The public rebuke flowed from a spat over Canadian landing rights for airlines based in the Gulf and will complicate the Canadian Forces' exit from Afghanistan next year, officials and experts said.

Throughout its deployment in Afghanistan, Canada has relied on Camp Mirage in the UAE as a stopover on the way to and from Kandahar and Kabul. But the UAE put an end to that arrangement after failing to secure dozens of new landing slots in Canada for Dubai-based Emirates airline and Abu Dhabi-based Etihad Airways.

While the diplomatic and commercial dispute was brewing for months, Canadian officials were shocked when Mr. MacKay and Chief of Defence Staff General Walt Natynczyk were told that they could not land at Camp Mirage or even fly over the UAE, senior federal officials said.

At the conclusion of a three-day tour in Afghanistan, Mr. MacKay confirmed the end of the agreement with the UAE. "At this point we will abide by the wishes of the Emirates, and … we will be leaving the base," Mr. MacKay said.

Mr. MacKay and Gen. Natynczyk had used Camp Mirage on their way to Afghanistan last week, continuing a long tradition that started in the fall of 2001 when Canada sent a squadron of warships to the region after the Sept. 11 terrorist attacks.

Without Camp Mirage, the Canadian Forces will need to find another base to bring back all its people and material from Afghanistan at the end of the combat mission next year. Experts said that any alternative farther from Afghanistan than Camp Mirage, such as Cyprus or Germany, will slow down the process by forcing transport planes to travel a much greater distance on each flight.

"It will increase the amount of flying time and reduce the number of flights per day out of Afghanistan," said security expert Alan Bell, president of Globe Risk International. "This will create large headaches for the logistics guys."

The Liberals slammed the Conservative government for creating the conflict with the UAE, saying the dispute is threatening the success of Canada's mission in Afghanistan.

"The Harper government should make a high-level, last-ditch attempt to persuade UAE to accept a six-month cooling-off period, with a Canadian commitment to treat UAE with respect, for a change, and to negotiate reciprocal airline landing rights in good faith," Liberal MP John McCallum said.

Mr. MacKay acknowledged that the Afghanistan exit will be more complicated without Camp Mirage, but he insisted that Canadian troops will find a way around any problem.

"They have alternative plans, they have contingency plans. With that in mind we're going through the various options that are before us right now," Mr. MacKay said. "We'll continue to do our mission here in Afghanistan … and we'll find other ways to support this mission through other hubs in the region."

Mr. MacKay did not enter into a war of words with UAE officials, saying Canada was grateful for its past collaboration. "They have been very supportive of the Canadian mission, supportive of the mission writ large, and for that we thank them," he said.

But UAE ambassador to Canada Mohammed Abdullah Al-Ghafli was more blunt, saying that current airline arrangements are a disservice to the 27,000 Canadians living in the UAE.

"It is unfortunate that this process has been so protracted and frustrating," he said. "UAE entered negotiations in good faith on the understanding that a solution would be reached and that constructive ideas would be brought to the negotiating table. The fact that this has not come about undoubtedly affects the bilateral relationship."

There have been other disputes involving Canada in recent months. Over the summer, the governments of the United Arab Emirates and Saudi Arabia threatened to shut down certain BlackBerry services unless Canadian-based Research In Motion agreed to provide local authorities with the means to monitor communication on the devices.

The UAE and state-owned carriers have been seeking dozens of new landing slots in Canada in return for letting the Canadian Forces stay at Camp Mirage. But Air Canada and Transport Canada opposed the idea of linking air negotiations to geopolitical issues.

The fear was that the UAE was more interested in stealing lucrative international traffic from Air Canada to cities such as Frankfurt than simply flying more customers to its domestic airports.

The dispute has been growing for months, and contingency plans were already in the works when officials from the Canadian government - including the Department of Foreign Affairs and International Trade - met with UAE officials in Paris last month.

Canada's goal at the behind-the-scenes-talks was to explore the possibility of a compromise.

UAE threatens to kick Canada out of covert military base Camp Mirage
October 8, 2010 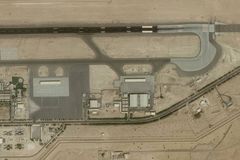 Canadian consumers lose, Emirates says
March 11, 2010
Emirates pushes for greater access in Canada
February 24, 2010
Follow Daniel Leblanc and Jane Taber on Twitter @danlebla @janetaber1
Report an error Editorial code of conduct
Due to technical reasons, we have temporarily removed commenting from our articles. We hope to have this fixed soon. Thank you for your patience. If you are looking to give feedback on our new site, please send it along to feedback@globeandmail.com. If you want to write a letter to the editor, please forward to letters@globeandmail.com.
Comments