Ottawa will restrict travel to Canada for key Ukrainian officials responsible for the "repression and silencing" of opposition voices there, but the government says the door remains open to further measures as it monitors the developing situation in Ukraine.

The announcement, delivered jointly by Immigration Minister Chris Alexander and Foreign Affairs Minister John Baird, came amid fresh volatility Tuesday in Ukraine: Prime Minister Mykola Azarov and his cabinet resigned and, after an extraordinary parliamentary assembly, legislators voted to repeal most of the draconian anti-protest measures adopted earlier this month. The day's developments, however, are unlikely to appease demonstrators demanding the resignation of President Viktor Yanukovych, who is under fire for shunning deeper association with the European Union in favour of aligning more closely with Russia.

"Canada will not stand idly by as the shadow of an old tyranny looms over the innocent people of this great country," said Mr. Baird, who in December visited with protesters in Uk raine and has spoken with his counterpart there on multiple occasions, including as recently as a few days ago. "We believe it will take more than words to establish trust with the people."

NDP foreign-affairs critic Paul Dewar said Tuesday evening his party welcomes the visa provision but he questioned why the announcement didn't come sooner and why the government hasn't embraced other, more significant action. "It falls short of what we've been asking for," he said, noting the NDP's hopes for targeted financial sanctions and an expedited visa process for vulnerable people seeking to come here.

Liberal immigration critic John McCallum took a sharper tone, criticizing the announcement as a "weak" measure that will be viewed as "essentially a non-action" among this country's 1.2 million Ukrainian-Canadians.

"I think it's a meaningless gesture – I'm not aware of any Ukrainian officials planning to visit Canada at this time," Mr. McCallum said, adding his party, too, would like to see individual economic sanctions and a fast-tracked visa process. "It doesn't do anything whatsoever. I think Canada should show solidarity in a more meaningful way."

Taras Zalusky, executive director of the Ukrainian Canadian Congress, said he is guardedly optimistic about Tuesday's events in Ukraine and called the Conservative government's announcement a "very positive step" – one he nonetheless believes should be bolstered by other measures, such as targeted financial sanctions. His group is sponsoring a rally Wednesday afternoon that will march from Parliament Hill to the Ukrainian embassy. Mr. Zalusky, who also lauded Mr. Baird's call Tuesday for an independent inquiry into the recent deaths of protesters, noted the Ottawa rally was announced over the weekend.

When asked by reporters why the government was not taking more concrete action, Mr. Baird said Tuesday's announcement was "not a final step for Canada" and that the travel restrictions marked "just another process in our engagement in support of freedom and prosperity in Ukraine." In launching the restrictions, Canada joins the United States, which announced on last week that it had revoked the visas of several Ukrainians linked to the violence.

Mr. Alexander said the decision – which was announced alongside about two dozen Conservative caucus members, some of whom represent significant Ukrainian-Canadian populations – was made following extensive consultations with stakeholders, including allies. In French, he added the government will continue to consider other options for intervention. Mr. Baird also said he will remain in close contact with his counterparts in Washington and Brussels as Ottawa continues to monitor the fluid situation on an hourly basis.

The anti-protest measures were deplored by Canadian MPs of all stripes during Monday evening's emergency debate in the House of Commons, and earlier that day Prime Minister Stephen Harper expressed concern that Ukraine is heading toward what he called its "anti-democratic Soviet past."

With a report from Paul Waldie in Kiev, Ukraine

new
MPs debate Ukraine after Harper warns of slide into 'Soviet past'
January 27, 2014 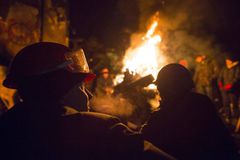 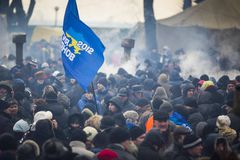 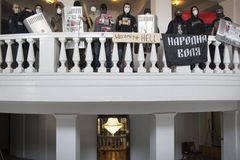 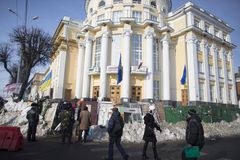