A senior United Nations official is calling on Canada to reach out to the Nigerian government and offer logistical and intelligence services to help find more than 200 Nigerian schoolgirls abducted by terrorist group Boko Haram nearly two years ago.

Speaking to The Globe and Mail ahead of International Women's Day on Tuesday, executive director of the UN Population Fund Babatunde Osotimehin said Canada has a good opportunity to re-engage with the Nigerians, who elected a new government last year, and support a "re-energized campaign" to locate the abducted schoolgirls.

"This particular [Nigerian] government has proven to be socially responsible and they've tried to do as much as they can do [to find the girls], so Canada can engage with this government to find out what logistic support or what intelligence support it can provide to locate the girls," said Mr. Osotimehin, a Nigerian national who is also a UN under-secretary-general.

The abduction of the girls by militants, who broke into a school in Chibok and pretended to be guards, sparked international outrage and prompted a global social-media campaign. The hashtag #BringBackOurGirls galvanized international attention in the immediate aftermath of the attack on April 14, 2014. A handful of the girls are believed to have escaped, but the majority are reported to have been forced into marriage with their Boko Haram captors.

Some West Africa experts do not share Mr. Osotimehin's view. Robert Fowler, a former Canadian diplomat in the region, says Canada's involvement would not have a significant impact on the search for the missing schoolgirls.

"Canada has very little local standing with regard to security issues in West Africa generally and in Nigeria in particular," Mr. Fowler said.

We therefore should be extremely modest in what anyone could expect Canada to achieve in such circumstances," said Mr. Fowler, who was held hostage for 130 days after being kidnapped in 2008 by al-Qaeda in the Islamic Maghreb while serving as the UN secretary-general's special envoy to Niger.

"The finding of the girls, however desperate an issue, is but a small piece of the larger equation of dealing with Boko Haram, an organization that has killed over 20,000 people in the last few years," Mr. Fowler said to The Globe and Mail.

The new Nigerian government of President Muhammadu Buhari, which took office last May, promised to defeat Boko Haram by the end of last year. In December, Mr. Buhari declared that Boko Haram had been "technically" defeated. But since then, hundreds of people have been killed in continued attacks by the Islamist radical group.

Although the extremist militia has been driven out of the major towns in northeastern Nigeria, it still controls much of the region, launching suicide bombings and other attacks on local markets and refugee camps across the region.

Following the schoolgirls' abductions, Canada deployed a small assessment team from May 12 to July 5, 2014, to support efforts to release the girls; provided strategic airlift transport to Britain's airborne surveillance project in northeastern Nigeria; and funded the RCMP to provide intelligence and investigation training, according to Global Affairs Canada. The department said Canada continues to engage the Nigerian government on the situation, but it's not clear what those efforts specifically entail.

The minister also refused to get into detail. "We are doing our best to help Nigeria to fight terrorism," Foreign Affairs Minister Stéphane Dion said on Monday to The Globe. "We are well active with them [to find the schoolgirls], but I cannot give too much details."

Mr. Osotimehin said the international attention on the schoolgirls' disappearance has "declined," as it has been "overshadowed" by other crises around the world, such as the Syrian conflict.

He said the Nigerians could use Canadian logistical and intelligence support to partner with neighbouring countries such as Cameroon, Niger and Chad to weaken Boko Haram's resistance in the region.

The students are thought to still be in the hands of Boko Haram, which is known to force women and girls into "marriages" involving rape. Mr. Osotimehin said efforts are ongoing to locate the girls, but he's doubtful all of them will be found.

"If you ask me realistically, we are probably not going to get all of them back and indeed they will not be in the shape and form in which they disappeared."

Mr. Osotimehin is in Ottawa on Tuesday to mark International Women's Day and draw attention to the needs of women and girls in humanitarian crises.

According to a former Boko Haram captive interviewed by The Globe and Mail last year, almost all of the abducted schoolgirls have been forcibly "married" to Boko Haram members. The witness, held captive for six months, said she met the abducted students and found them haggard and thin, forced to spend their days studying Islam and constantly dreaming of escape.

The witness said Boko Haram was holding the Chibok students in the northeastern Nigerian town of Gwoza. But when the town was later captured by the Nigerian military, there was no sign of the girls.

Despite the Nigerian President's claim that Boko Haram was "technically" defeated, the radical militia still controls a number of rural strongholds in remote mountains and forests of Borno state in northeastern Nigeria.

One member of Nigeria's senate, who represents a region of Borno state, has estimated that Boko Haram still controls about half of the state's territory.

The Nigeria Security Tracker, a project of the U.S.-based Council on Foreign Relations, estimates that Boko Haram has killed nearly 3,700 civilians over the past year.

"The resilience of Boko Haram under the Buhari administration suggests that there has been a gross underestimation of the numerical strength, organizational efficiency and motivation of the sect members," said Nigerian political scientist Jideofor Adibe, writing for the Brookings Institution last month.

The Buhari government's "triumphalism" about Boko Haram has been "rather premature," he said. "Boko Haram has shown incredible capacity for regrouping after suffering setbacks."

In late January, in one of the most shocking examples of how Boko Haram remains a serious threat, the extremist militia killed at least 86 people and injured 62 in the village of Dalori, just a few kilometres outside Maiduguri, the capital of Borno state.

Dozens of Boko Haram fighters in cars and motorcycles attacked the village, shot its residents and firebombed their homes. They also raided a nearby refugee camp and used suicide bombers to kill more people. They were able to wreak havoc in the village for about four hours before they were finally driven out, even though Nigeria has a major military headquarters in nearby Maiduguri.

A few days later, Nigeria's military announced that it was ordering the shutdown of markets in a number of northern Nigeria towns because the traders were helping to "sustain" Boko Haram.

The move was evidence that Boko Haram is deeply "embedded" in some parts of northeastern Nigeria, according to John Campbell, a former U.S. ambassador to Nigeria and now a senior fellow at the Council on Foreign Relations. 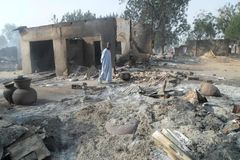 Opinion
Why Canada should take the fight against Islamic State to Africa
January 19, 2016 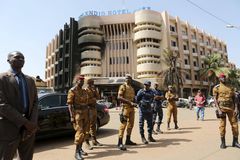 Follow Michelle Carbert and Geoffrey York on Twitter @michellecarbert @geoffreyyork
Report an error Editorial code of conduct
Due to technical reasons, we have temporarily removed commenting from our articles. We hope to have this fixed soon. Thank you for your patience. If you are looking to give feedback on our new site, please send it along to feedback@globeandmail.com. If you want to write a letter to the editor, please forward to letters@globeandmail.com.
Comments