Tom Mulcair is ending his long and frustrating fight to convince voters to elect the country's first NDP government with rallies organized to depict a momentum that polls suggest began slipping away from him weeks ago.

"Tomorrow, with your help, New Democrats will prove that Canadians are ready for change in Ottawa," the NDP Leader shouted gamely to a crowd of about 1,000 supporters at a rally Sunday in a Toronto convention centre. "Ontarians know that it is New Democrats who defeat Conservatives."

He then headed to Montreal, his hometown, to say much the same thing.

It is the message with which Mr. Mulcair launched his campaign on August 2 when he told reporters in Gatineau, Que. the NDP is the only party with the strength to push Stephen Harper from office. He bases his argument on the fact that the New Democrats started the race with nearly three times the seats of the third-place Liberals and he has made the point at every so-called whistle stop on this campaign. But it does not resonate as well when his party appears set to lose some of the many MPs it gained in 2011.

The 11-week contest for power in Ottawa has been a marathon for all of the parties but it has been especially difficult for the New Democrats who topped public opinion polls back in August but now, according to Nanos Research, languish 15 percentage points behind the front-running Liberals.

As he tries to lift the spirits of the grassroots faithful – some of those attending his rallies quietly admit they are discouraged by the poll numbers – Mr. Mulcair quotes former party leader Jack Layton in saying "Don't let them tell you it can't be done." He reminds them of the unexpected breakthrough that the party had four years ago in Quebec, and the fact that the NDP were given a majority in provincially Alberta which is an outcome that would have seemed outlandish in the not so distant past.

Mr. Mulcair's final pitch to the electorate on Sunday focused less on what he would do as prime minister and more on the perceived deficiencies of his political rivals. He portrayed both the Conservatives and Liberals as entities of corruption and exhorted those in his audience to shout "We're not going back" to a government run by either of those parties.

"Canadians deserve change in Ottawa," he said Sunday. "Let's remember that it was Liberal arrogance and corruption that Stephen Harper promised to clean up and, today, after 10 years of Conservative scandals, the Liberals are asking you to trust them to clean up that mess."

The NDP Leader would not take questions from reporters. But his answers in previous days have rarely been on point. On Saturday, for instance, he would not discuss co-operation with any other party in a minority situation – or whether he will step down if his party finishes in third.

Mr. Mulcair's first stop of the day was at the campaign office of Jennifer Hollett in the downtown Toronto riding of University-Rosedale where the Liberal candidate is Chrystia Freeland, an incumbent MP and someone who has been touted as a star of Mr. Trudeau's team.

Mr. Mulcair has generally appeared to be upbeat, urging the folks who have greeted him at rallies, both large and small, to give their all until the polls close on voting day. But, at Ms. Hollett's office, he seemed edgier than usual, punctuating his well-worn speech with attacks on Ontario's Liberal Premier, Kathleen Wynn, as well as Ms. Freeland and Adam Vaughn, the Liberal incumbent who is running against NDP candidate Olivia Chow in the Toronto riding of Spadina-Fort York.

"Jennifer has run a spectacular campaign," Mr. Mulcair told her workers. But that may not have been enough.

Ms. Hollett, a photogenic former MuchMusic VJ and CBC journalist with a master's degree in public administration from Harvard was, at one time, on track to take this riding away from Ms. Freeland. But recent polls suggest Ms. Freeland has closed the gap and the Liberal momentum could give her the win.

The New Democrats have been fighting to hold their ground in all parts of the country but Toronto has been particularly tough. In 2011, the party gained six seats here – adding to the two they had that were held by Mr. Layton and his wife, Ms. Chow. But the gains they were predicting two months ago seem to be drifting out of reach and some New Democrats quietly concede that many of their Toronto MPs are in jeopardy.

Ms. Chow could beat Mr. Vaughan, but she is struggling. And Peggy Nash, the party veteran who is the NDP industry critic, is in a tight race in Parkdale-High Park.

Still, Mr. Mulcair is waiting for the votes to be counted before he will be counted out. "We have never been more close," he told the crowd in Toronto. "We can feel the energy." 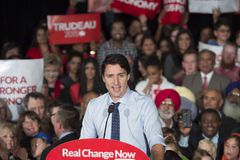 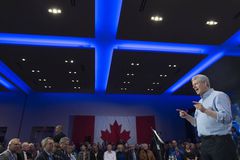 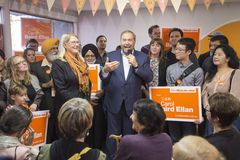