American negotiators tabled new proposals on labour standards at NAFTA talks on Tuesday, opening an area of dispute among the three trading partners with measures that fall far short of Canada's goal to protect union rights and compel Mexico to pay higher wages.

The U.S. text, which sets lower labour provisions than the Canadian position, came just hours before Foreign Affairs Minister Chrystia Freeland hosted a dinner for her U.S. and Mexican counterparts on the eve of the final day of the latest round of North American free-trade agreement talks in Ottawa.

Contentious issues such as labour standards, trade-dispute settlement mechanisms, Buy American provisions for infrastructure and tougher rules of origin to assure that autos and auto parts have higher North American content are expected to be on the table at the ministerial-level negotiations.

The U.S. proposal echoes what was in the Trump-rejected Trans-Pacific Partnership (TPP) agreement, which would have guaranteed "acceptable conditions of work with respect to minimum wages, hours of work, and occupational safety and health."

The American text tabled Wednesday rejected Canada's call for an end to right-to-work laws in 28 U.S. states. Those laws allow workers have a right to refuse to pay union dues while enjoying all the benefits of union membership.

Experts say the Canadian proposal to undercut U.S. right-to-work laws would never survive in the cauldron of American politics and would alienate U.S. businesses that have investments in Mexico.

"This has the potential to unravel," said Dan Ujczo, an international trade lawyer with the cross-border law firm Dickinson Wright. "Let's assume that they could even make it into the agreement – right-to-work would be the death knell of any new NAFTA agreement in Congress."

In the House of Commons, Ms. Freeland defended her labour proposal after NDP MPs urged her to make sure that a rewritten NAFTA forces up wages in Mexico and keeps auto jobs in Canada.

"Our government is absolutely committed to advancing the cause of workers' rights through NAFTA and through the NAFTA negotiations," she said. "We are very aware that it is unfair to expect our workers to be part of a race to the bottom and compete against workers with lower standards. That is what we are saying at the table."

The Canada proposal has won support from some unions in Canada and the United States.

Christopher Monette, a spokesman for Teamsters Canada, said Ms. Freeland has the backing of 1.4 million Teamsters across North America.

"I understand there is an ocean of difference between the Canadian and American proposals," Mr. Monette said.

Mexico's delegation has yet to put forward its own labour proposal, saying its will study the Canadian and American texts.

"We understand that the [Mexican] business community is pushing back hard against the Canadian text, and the Mexican government is feeling it," one labour source said.

One of Mexico's top business lobbying groups that has a formal consultation role in NAFTA, said he didn't think the U.S. proposal would be as troublesome as Ms. Freeland's plan.

"The Canadian proposal is not aimed at Mexico, it's really aimed at right-to-work in the U.S.," Moises Kalach, the head of trade negotiations for Mexico's Consejo Coordinator Empresarial, said. "The proposals from the U.S., I hear, are very similar to what [was] in TPP. I have not read it, but if that's the case, and it's similar to the TPP, I think we'll feel okay?"

Jerry Dias, president of Unifor, which represents Canadian auto workers, said his union is strongly supportive of the Freeland proposal, which would also do away with Mexico's "yellow" unions that represent employers and not employees.

"At some time or another, people are going to have to make some significant moves. Mexico has no chance, no chance, of getting an agreement without labour standards being a part of the central body of the NAFTA agreement," Mr. Dias said.

Canada's ambassador to Washington, David MacNaughton, told a Toronto audience on Tuesday that NAFTA bargaining talks are going about as well as he expected, but "there will be some drama" before negotiations conclude.

Facing questions from a well-heeled crowd, Mr. MacNaughton said his message was one of reassurance and that "Canada's goal is a good deal, not any deal."

Mr. MacNaughton said many early obstacles at the negotiating table have been overcome and officials from all three countries are beginning to have constructive talks over substantive issues.

"I am optimistic. People don't shoot themselves in the foot on purpose," he said of renegotiating the trade pact. "Our negotiators are in great shape, but I think we're going to need continued co-operation from the provinces and the business community."

The ambassador said that Canadians will need to continue lobbying American leaders on the merits of trade between the two countries indefinitely if Canada's goal is to overcome protectionist rhetoric after the NAFTA talks end. 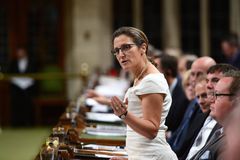 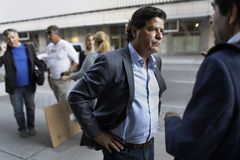 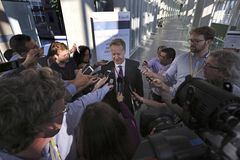 Follow Robert Fife, Campbell Clark and Justin Giovannetti on Twitter @RobertFife @camrclark @justincgio
Report an error Editorial code of conduct
Due to technical reasons, we have temporarily removed commenting from our articles. We hope to have this fixed soon. Thank you for your patience. If you are looking to give feedback on our new site, please send it along to feedback@globeandmail.com. If you want to write a letter to the editor, please forward to letters@globeandmail.com.
Comments