In a major boost for the enemies of Bashar al-Assad, the American government has recognized the Syrian National Council as the true representative of that nation's people.

The announcement comes as representatives of more than 100 nations gather in Morocco to discuss the Syrian civil war amid warnings that Assad forces could be preparing to use chemical weapons as a last resort against opposition foes.

"We do take the concern [of a chemical-weapon attack] incredibly seriously," Mr. Baird said Tuesday from Morocco in a conference call with reporters.

During the talks, the threat "will obviously be top of mind," he said.

American recognition of the Syrian National Council will pave the way for greater non-military aid and assistance. The need for that assistance is dire. The Syrian Red Crescent estimates that some 2-1/2 million people – about 10 per cent of the country's population – have been driven from their homes by the fighting. More than 42,000 people have died since the uprising began, and half a million have fled the country.

While Mr. Baird would not comment on what measures Canada might take in the event of a chemical attack, CTV reports the federal government is ready to deploy its Joint Incident Response Unit – which is tasked with responding to chemical, biological and radioactive attacks – if asked by NATO for help. The Disaster Assistance Response Team (DART) could also be sent in.

Syria is believed to have one of the world's largest supplies of chemical weapons. Last week, Western officials warned that the regime has loaded the precursors of sarin gas into bombs, as the Assad regime struggles to hold the capital, Damascus, against rebel forces.

However, U.S. Defence Secretary Leon Panetta said Tuesday that the Syrian government seems to have slowed preparations for the possible use of chemical weapons in recent days.

Yet even as the opposition gains strength, radical elements within it threaten to splinter the fragile coalition. Although U.S. Secretary of State Hillary Clinton was forced to cancel her attendance at the summit, due to what aides described as a severe stomach flu, she did designate Jabhat al-Nusra, or "the Support Front" in Arabic, as a foreign terrorist organization. Fighters from the group are increasingly prominent within the coalition fighting the regime.

"There is a small element of those that oppose the Assad regime that in fact are affiliated with al-Qaeda in Iraq, and we have designated them, al-Nusra, as a terrorist organization," Mr. Obama said in the interview.

Mr. Baird wouldn't say whether the Canadian government was prepared to take similar steps. But he acknowledged that "we are concerned about a small element in Syria that is particularly radicalized and extremist, with connections to known terrorist organizations. This causes us grave concern."

Mr. Baird warned of three potential nightmare scenarios involving chemical weapons in Syria. The first is that the Assad regime would unleash chemical weapons against opposition forces and the civilian population, causing massive loss of life and forcing Western nations to intervene militarily.

A second fear is that the regime would try to rally support by using chemical or biological weapons against Israel or another neighbouring state.

"Worse yet, they could fall into the wrong hands – of an extremist radical group or groups," Mr. Baird observed. In that case, Western nations would be at risk of a chemical or biological attack.

He called the teleconference to announce further sanctions against Iran, which Canada and other nations believe is seeking to develop a nuclear weapon. The latest sanctions target the Iranian Revolutionary Guard, the regime's powerful paramilitary force. Jewish groups in Canada have long been urging such action.

Ninety-eight new entities and one individual have been added to the list of those targeted for sanctions. As well, exports of materials used in shipbuilding, mineral exploration, mining, metal production and telecommunications industries are prohibited for export.

The more immediate threat to global security, however, is the deteriorating situation in Syria. Analysts fear that, as it faces defeat, the Assad regime might retreat into its Alawite stronghold, even as Sunni factions within the opposition turn on each other.

In such a situation, Syria could disintegrate into a failed state – one with massive stores of chemical and biological weapons. Preventing such a catastrophe is what has drawn Mr. Baird and his counterparts from around the world to Marrakesh.

This story has been corrected. The headline on an earlier version incorrectly stated that the Syrian National Council was being recognized as the government of Syria.

With reports from Associated Press and Agence France-Presse 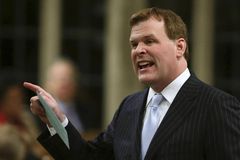