NDP Leader Thomas Mulcair said he had no reason to contact police after the mayor of Laval offered him an envelope in a backroom and expressed a desire "to help" his campaign for a seat in the National Assembly in 1994.

Mr. Mulcair acknowledged in a statement to police in 2011, 17 years after the incident, that he thought the envelope might have contained money, but he said he had no such evidence at the time to bring to authorities and help launch a criminal probe. Two other former provincial politicians from Laval have said that Gilles Vaillancourt offered them money for their campaigns when he was mayor, but Mr. Mulcair said he never saw the contents of the envelope.

"I never saw any cash and I couldn't testify or make an accusation based on something that I hadn't seen," Mr. Mulcair told reporters in his first public comments on the incident.

He added that he would not advise his caucus members to contact authorities if they lack evidence of a clear bribery attempt.

"On our side of the House, we won't touch the envelope. On the Conservative side, they hand them out," Mr. Mulcair said.

The Conservatives and the Liberals slammed Mr. Mulcair, who was a long-time Liberal MNA in Quebec City before becoming a New Democrat MP in 2007, for his lack of action in 1994. Reports in recent years have said Mr. Vaillancourt offered cash to local politicians in a bid to obtain their loyalty.

"Personally, if I suspected that someone was trying to offer me an envelope filled with cash or a bribe, I would bring the matter to police within a matter of hours," Liberal Leader Justin Trudeau said.

"The leader of the NDP kept his first-hand knowledge of corruption from the public and was only forced to speak up … after corruption investigations began in Quebec," Mr. Anders said. "The NDP owes Canadians an explanation for its leader's 17-year cover-up on corruption in Quebec."

Earlier this month, Quebec's anti-corruption squad arrested 37 people in a massive sweep in Laval, including Mr. Vaillancourt, who resigned in disgrace last year. He has long denied any wrongdoing and has vowed to prove his innocence at his trial.

"He said, 'I would like to help,' and he was repeating it," Mr. Mulcair said in a sworn statement to police, which was released to the media. "I said, 'I have a good campaign, everything is going well, thank you Mr. Vaillancourt.' I physically stepped back. I promptly put an end to the meeting, shook hands and left."

Mr. Mulcair said he discussed the matter in 2006 in an impromptu and informal conversation with Mr. Auclair.

"He told me something which was similar to what I went through, with an important difference: I cannot state, because it would be false, that Gilles Vaillancourt offered me money. In fact, he never spoke about money," Mr. Mulcair said.

Mr. Mulcair said that Mr. Vaillancourt, during their meeting, "held something in his hand, which I could interpret and in the context of what came out in terms of Mr. Ménard and Vincent Auclair, it's clear that it was something that could be interpreted as such. But he did not give me anything, he never spoke about money," Mr. Mulcair said. 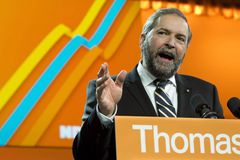