Vote mobs that swept across the country on university campuses during the 2011 federal elections did not have a measurable impact on youth voter turnout. The news portrayed them as being very impressive as they were happening, but the National Youth Survey commissioned by Elections Canada suggests actual impact on turnout just wasn't there.

In the 2011 federal elections, over 1.8 million eligible youth did not vote. That is almost two-thirds of youth. Young people in Canada feel disengaged from politics because politicians do not meaningfully engage them or make the issues relevant to their needs. Their concerns are not addressed and politicians appear to be out of touch.

Politicians, on the other hand, do not see an incentive to engage non-voters and especially youth (as they are known to have the lowest voter turnouts) when they could spend that time mobilizing people who they know will vote. As a consequence, there is a vicious cycle where lack of interest among youth and politicians' reluctance to engage them reinforce each other.

But, this vicious cycle should not be allowed to continue indefinitely. If it does, an entire segment of the Canadian electorate will remain outside of the electoral process, their interests largely unrepresented. It is also intriguing, given the number of youth, that politicians do not see youth as a potent pool of voters, but would rather treat them as an electorate not worth pursuing.

Young people have a stake in the health of the political system, and their participation is important to the continued health of Canadian democracy, with all groups represented. If the young people who do not feel engaged now continue to remain disengaged from the political process, overall turnout will be affected. Data we have suggests that they are less likely to become voters later in life.

If the decrease in voter turnout is alarming, then we should consider bringing out the youth vote as voting seems to be a habit that is either developed early in life or not. Some scholars have suggested that as youth age they will become more politically engaged, but data we have suggests that if they enter the electorate, they do so much later than expected.

Similarly, even though there is a high correlation between civic duty and the propensity to vote, in general youth do not perceive voting as a civic duty. While youth are more engaged now in their communities and single causes than youth were previously, they do not see politics relevant to their activism.

Politicians can no longer hide behind the argument that youth are less vested in the system than older electors and, as a result, vote at lower rates. Even though, youth in Canada, for the most part, do not have dependents or mortgages, data we have suggests that they do share some of the same concerns as older electors such as health care and education.

In the last federal leaders debate, none of the leaders directly addressed the youth in a meaningful way. Even when they talked about education and job creation, the language was directed to families, specifically taxpayers. With such rhetoric it is not a puzzle that youth do not relate to politics. Young people's interests and participation needs to be highlighted so that youth feel empowered to vote and are integrated into the political system.

Ignoring them is not the solution.

Semra Sevi is a political science student at U of T. She recently completed a senior study on youth voter turnout in the 2011 federal elections under the supervision of Michael Ignatieff. Tories consistent in number of bills passed – the difference is they’re bigger
December 17, 2012 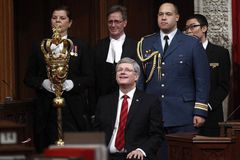