Canadians appear to favour many of the economic policies proposed by the Liberals, but Justin Trudeau's abilities as an economic manager still get lower ratings.

The Nanos Research poll conducted for The Globe and Mail and CTV found strong support for the kind of looser fiscal policy Mr. Trudeau has proposed, with voters preferring stimulus spending to boost the economy even if it means deficits over balancing the books. And many like the Liberal proposal to make the affluent pay more taxes, too.

But when Canadians are asked who they trust to manage the economy, the poll found 26 per cent chose the Liberal Leader, behind Conservative Leader Stephen Harper (31 per cent) and in a statistical tie with NDP Leader Thomas Mulcair (28 per cent.)

That suggests popular economic policies have so far not overcome questions about Mr. Trudeau's experience and competence – which Mr. Harper's Conservatives have targeted in TV ads. Yet the poll also points to weaknesses on the issue for the other two leaders.

Canadians appear to feel it is time for an interventionist approach to the economy, according to the Nanos telephone survey of 1,000 Canadians conducted between Sept. 12 and 15. (A random survey of that size has a margin of error of 3.1 percentage points 19 times out of 20.)

About half, 49 per cent, think it is time to increase spending, even if means running deficits. That is the position Mr. Trudeau has taken. A smaller group, 42 per cent, believe the government should focus on balancing the budget to avoid increasing debt, while 9 per cent were unsure. Both Mr. Harper and Mr. Mulcair have pledged to balance the budget.

And when asked what would have the largest positive impact on the economy, 45 per cent choose the building of infrastructure, the big-ticket item at the centre of Mr. Trudeau's stimulus proposal. That beats out spending on social programs (19 per cent), cutting taxes (17 per cent), or paying down national debt (16 per cent.)

While the Liberals have promised to spend the most on infrastructure, all parties have promised to put federal money into this area. The Conservatives plan to spend $6-billion a year, while the Mr. Mulcair's NDP would increase that total, starting with an $840-million boost next year. The Liberals promise a much bigger increase, $5-billion per year.

Among different options to pay for greater government spending – a goal Mr. Harper would reject – the top choice, at 38 per cent, is increasing income taxes on the top 1 per cent. It is Mr. Trudeau who has proposed raising taxes on high-income earners to pay part of the cost of a middle-class tax cut. Raising corporate taxes – the NDP proposes a two-percentage-point hike, to 17 per cent – is second, chosen by 25 per cent. And running short-term deficits is third, at 18 per cent.

The Conservatives and the NDP appear to have an edge in another area, however: helping small business. Both Mr. Harper and Mr. Mulcair promise to cut the small-business tax rate from 11 per cent to 9 per cent. The Nanos poll found that 51 per cent chose "encouraging Canada's small businesses" as the most important priority for creating jobs, compared with encouraging the manufacturing sector (37 per cent) and the oil-and-gas sector (7 per cent.)

Mr. Trudeau's big problem on the economy appears to be that he is running behind his party and policies. But his ratings on the question of which leader Canadians trust to manage the economy have improved considerably since July, and he is now ahead of Mr. Mulcair on that score outside of B.C. and Quebec. The NDP leader is top in his home province.

Mr. Harper, who ranks first on that score nationally, does not have a big lead in any region except the Prairies. And Canadians give him poor scores for job creation: When asked to rate his record on a scale from one to 10, 65 per cent put it at five or lower.

Another finding, unrelated to the economy, carries a more direct warning for the Conservative Leader: 69 per cent believe it is time for a change, while 25 per cent think it is not, and 5 per cent are unsure. 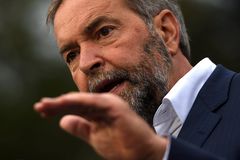 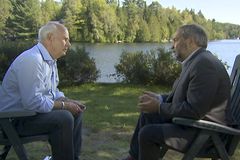 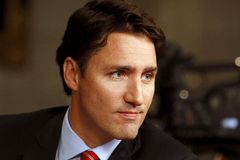