Ontario Premier Dalton McGuinty spent much of last Saturday on the phone with five of his closest advisers, informing them that he had decided to resign after nine years in office, sources say.

Chief of Staff David Livingston, along with two of his deputies and his predecessors, Chris Morley and Don Guy, each received a phone call from Mr. McGuinty. That fed a flurry of calls over the weekend among the advisers and Mr. McGuinty's brother Brendan as they developed a plan for Canada's longest-serving premier to make his exit, according to sources familiar with the talks.

Those phone conversations paved the way for Mr. McGuinty's surprise announcement at an emergency caucus meeting on Monday evening that he was resigning after 16 years as Liberal Leader and just one year after winning a minority government.

"The Premier was absolutely firm on the fact that his caucus and Ontarians hear about the news together," one of the sources said.

At the same time Mr. McGuinty was dealing with his personal future, he was grappling with a growing controversy over his government's decision to pull the plug on two power plants west of Toronto.

The opposition has forced the government to release internal documents on the discussions around those cancellations but insist there is still more to come. They assert that full disclosure would reveal that the cancellations were motivated solely by a push to save Liberal seats in the election last October. Now, with Mr. McGuinty announcing that he was proroguing the legislature along with his resignation, that pressure is paused.

Liberal House Leader John Milloy said on Tuesday it was necessary to have all business grind to a halt because the government had reached an impasse with labour leaders and the opposition over its plans to freeze wages.

"I think things have become poisonous in the chamber," Mr. Milloy told reporters.

But opposition members said the government prorogued the legislature because of weeks of embarrassing headlines over the cancelled power plants, which will cost taxpayers at least $230-million.

Progressive Conservative MPP John Yakabuski said the government has stopped a legislative committee from calling witnesses and pursuing allegations that Mr. McGuinty and two of his senior cabinet members misled the legislature.

"This is their attempt, successfully I would say, to block the people of Ontario from getting at the truth," Mr. Yakabuski said in an interview. "The public has no way of getting at the facts of what really happened and how much money [cancelling the plants] will actually cost."

New Democratic Leader Andrea Horwath said the timing is "very curious" to prorogue the legislature. "We know what the big issue has been around here," she told reporters.

The controversy surrounding the cancelled power plant projects slated for Oakville and Mississauga deepened last Friday after the government released another 20,000 pages of documents that were not identified as part of the initial search.

Energy Minister Chris Bentley and Mr. Milloy each apologized to the legislature on Monday morning for insisting that all documents had been tabled with the release of 36,000 pages on Sept. 24 when in fact they were both aware that bureaucrats were conducting a further search.

Mr. Bentley was already facing a rare contempt of Parliament censure for not disclosing documents to a legislative committee last May. The revelations that he was aware of the existence of further documents stiffened the resolve of both the Tories and the New Democrats to pursue a second contempt motion, not just against him but also against Mr. McGuinty.

Opposition leaders both called on the government to resume the legislature. "We do not need to bring the daily workings of the legislature to a halt in order to accommodate a Liberal leadership race," Tory Leader Tim Hudak said in a letter on Tuesday to Mr. McGuinty.

Here is what happens now that Ontario's legislature has been prorogued:

All bills that have not received royal assent expire on the order paper. Each can be recalled, but the legislative process starts all over. There were more than 70 government and private member's bills on the order paper when Dalton McGuinty announced his resignation as premier and prorogued the legislature.

Here is a sampling of what has been put on hold:

WHAT'S NEXT FOR THE LIBERAL PARTY?

The Ontario Liberal Party will hold a convention to select a new leader who will become premier. Only current party members can vote and Mr. McGuinty will remain premier until his successor is chosen. Party president Yasir Naqvi won't say when the convention will be held but the best guess is January.

WHAT'S NEXT FOR THE LEGISLATURE?

Mr. McGuinty said he will leave it up to his successor to recall the legislature. That could be in winter or later, depending on whether a new leader wants to introduce a budget and then call an election. The NDP and Conservatives are pushing for an immediate recall of the legislature.

WHAT IS THE FALLOUT?

"The premier's resignation and prorogation of the legislature during a time of heightened global economic risks, in our opinion, introduce some uncertainty over the province's fiscal targets in the medium term." Rating agency Standard and Poor's. 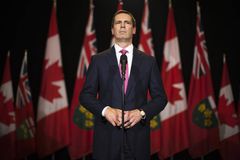 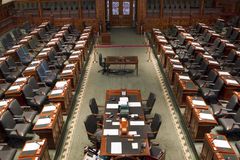 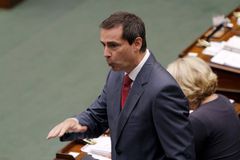