So did 2015 have a political subtext that had nothing to do with the economy, with taxes, with "is he ready or not?" As the new year starts, are we looking at a new standard for politicians sharing their inner feelings?

They say politics is show business for ugly people. Mostly, the point here is not that people in politics are hard to look at, but that they put on an act.

Advice given to politicians for decades has underscored that idea: Give voters a polished, tweaked, buffed version of yourself. Craft your thoughts, conceal unpopular ideas, choose your words carefully, pick the right venue, get the right shot, create the perfect reaction.

Eventually, this created a restlessness for "authenticity." The only surprise is how long it took. And now we know if a politician likes hockey, Coke, chips, chinchillas, Star Wars, or the Beatles.

A lot of this has had a "Stars! They're just like us!" style. Packaged authenticity burgers.

On any given day, this prime minister will let you know how he's "feeling." We're not really used to this. So far, voters are taking it well enough – but is that because it's novel, or because it's nourishing?

The other day, Prime Minister Justin Trudeau described his own feelings about the history of Indigenous people in Canada. "… I can only feel guilty … very aware of the contrast between my schooling and the experiences some others went through…" "I give you my word that we will renew and respect that relationship." Deeply personal sentiments.

When challenged, the PM said his cabinet would have equal numbers of men and women "because it's 2015." He was describing a feeling. He made no effort to elaborate, letting people relate to the feeling (or not) rather than a detailed argument about policy leadership.

Trudeau's critics cast his feelings as a gooey, weak substitute for leadership. They say that gullible voters are being conned into feeling good about a guy with a big heart and a small resume, while ignoring brainier, conventional politicians to the left and the right.

This is self-satisfying, but risky political analysis.

They'd be better off taking note of how politicians who ignore conventional packaging are doing these days. Donald Trump is spending no money and leading a large pack of experienced, polished political presenters. Bernie Sanders has no chance of becoming president, but his raw "I'm mad as hell" campaign gets more than its share of attention.

When Trudeau met arriving Syrian refugees, some opponents sniffed about another contrived photo op. But voters connect the feelings they had when they saw Alan Kurdi's lifeless body and the sight of their prime minister putting a winter coat on an arriving little girl.

We've been accustomed to photos used by Stephen Harper, sleeves rolled up in his Centre Block office, working late into the evening, relishing the work. These convey a sense of what makes the man tick. In contrast, the Harper image that most surprised voters in the last 10 years was probably when he hugged his opponents in the House of Commons the day after the Hill shooting.

On the one hand, good for Mr. Harper to let people know about his laudable, fierce work ethic. On the other, many of his packaged images, along with his speeches, tended to define Conservative politics with a world view that was basically "the world is a lousy place, and then you die."

Reactions to Trudeau in part, anyway, reflect the fact that most Canadians wake up feeling optimistic. During good economic times and bad. That's not about being naïve, it's about being hopeful.

Partisans may feel tempted to ridicule Trudeau's "sunny ways" mantra and his inclination to talk about how he feels. But they should observe more carefully the world outside politics. Books about how to be in touch with our feelings, and to think positively, make bestseller lists every year. When was the last one you saw that promoted the opposite?

Bruce Anderson writes a regular online column for the Globe and Mail. He is a pollster and communications counsellor, chairman of polling firm Abacus Data, and Partner with i2 Ideas and Issues Advertising. Over his career he has provided counsel and polling for Liberal and Progressive Conservative politicians but no longer does any partisan work. Different members of his family have worked for Conservative, Reform and Liberal politicians, and one of his daughters currently works for Prime Minister Trudeau. He comments widely on public opinion and politics and spent four years as a member of CBC's popular At Issue panel.

Opinion
The errors of this grizzled columnist’s ways
January 2, 2016 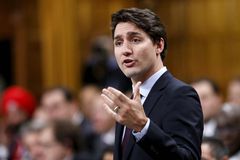