The most striking image from yesterday's Toronto mayoral election wasn't one of a cheering crowd at a victory rally or long lines of voters eager to cast a ballot: it was the map of the results showing how Toronto has remained geographically divided in terms of mayoral candidate support.

However, the map didn't paint the usual picture of a left-wing downtown pitted against the conservative suburbs that analysts often use to simplify explanations of Toronto politics. While Doug Ford did win Etobicoke and Scarborough, and Olivia Chow won wards encompassing her old federal constituency (Trinity-Spadina), John Tory did very well not only in the old city of Toronto, but large parts of North York, as well.

Margin of victory by each candidate 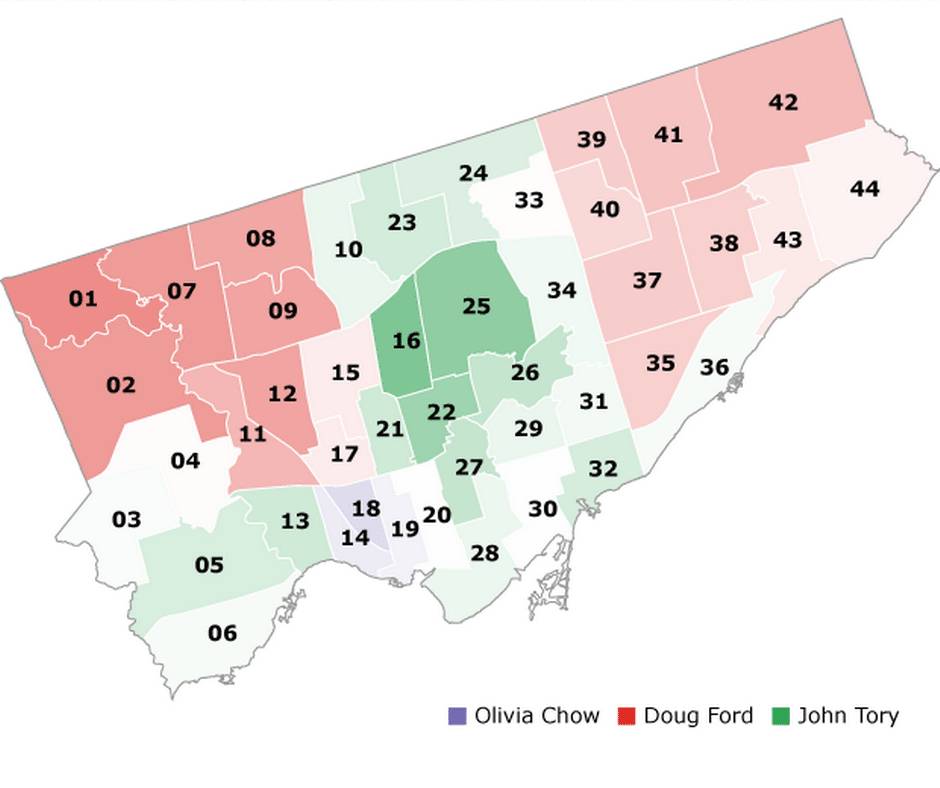 If Toronto's current electoral map doesn't reflect the simple downtown-suburban narrative, is there a better explanation for the voting patterns underlying last night's election? In order to gain some understanding of the statistical patterns behind the map, we can combine census data from the 2011 National Household Survey with the election results broken down by ward to figure out if any socio-demographic indicators were correlated with the levels of support for the leading mayoral candidates.

This approach is often called ecological analysis. While it cannot tell us anything about the behaviour of voters as individuals, ecological analysis can tell us if candidates performed consistently well in areas with specific demographic characteristics. To simplify matters, I'll use a measure of performance comparing the electoral success of candidates in wards with certain characteristics (for instance, wards with above average income) to that candidate's level of support city-wide. For example, if Candidate X won 10 per cent of the city-wide vote, but won 30 per cent in wards with above-average Segway use, I'd say that Candidate X performed well in areas with above-average Segway use (+20 per cent).

The image of soon-to-be-Mayor John Tory as a wealthy businessman is well-suited to the areas of the city where he performed strongly on election day. Tory did particularly well in wards with above average incomes (+14 per cent) and higher levels of education (+11 per cent). Conversely, Tory performed less well in wards with higher than average proportions of first generation Canadians (-9 per cent).

The demographic picture that people have for the traditional Ford voter ("Ford Nation") varies wildly. Some people see the Fords as having an ideologically conservative support base, angry about the 'war on the car' and possessing an unusual enthusiasm for subways, while others think Ford Nation is to be found in the suburban parts of Toronto added to the city during amalgamation. The data suggest a somewhat different story, with Doug Ford having performed well in wards with higher numbers of first-generation Canadians (+14 per cent), lower than average levels of education (+14 per cent) and higher than average levels of home ownership (+3 per cent, the best relative performance of all three main candidates when using this indicator).

In contrast to the support bases of Ford and Tory, socio-demographic factors were less important to understanding where Olivia Chow performed well. For instance, in wards with higher than average income, Chow did almost as well as she did city-wide (-1 per cent), which is in stark contrast to John Tory's performance in these same wards (+14 per cent). The most important factors favouring Chow were wards with higher than average proportions of renters (+4 per cent) and wards with lower than average numbers of first generation Canadians (+5 per cent). However, Chow's inability to gain support from the Torontonians she might have been expected to do well with – namely, traditional progressive voters – ultimately caused her defeat.

What does this suggest?

These three brief socio-demographic portraits of patterns of electoral support for Tory, Ford and Chow paint a more nuanced picture of the Toronto electorate than one that simply declares that it is a battle between the suburbs and downtown. Instead, the patterns suggest that the divisions in Toronto politics are more related to a more classic political division between more powerful in-groups and less powerful out-groups. Wards with attributes generally associated with having political power (for instance, groups with higher incomes and more education) tended to vote for John Tory, while wards with fewer of these attributes (for example, areas with lower incomes, and more first-generation Canadians) supported Doug Ford.

These patterns don't make sense if we want to see the politics of Toronto as one that pits a progressive downtown against the conservative suburbs. These patterns make much more sense if we instead see support for the Fords as an expression of the frustrations of some Torontonians who might feel alienated from political power.

Tables breaking down levels of support by socio-demographic variables