The federal government's economic policy priorities are in line for a significant shakeup should current polling trends hold through to voting day.

From a policy perspective, a Liberal government led by Justin Trudeau would represent a more interventionist federal government on economic matters, particularly in areas such as infrastructure, pensions, the environment and balanced budgets. And some key questions have remained unanswered by the party, including how a Liberal government would respond to provincial calls for more generous health-care transfers.

The Liberal Party's rise in national polls appears to have continued through the Thanksgiving weekend and is now at 37.1-per-cent support as of Oct. 14, according to nightly tracking by Nanos Research for The Globe and Mail and CTV.

Support for the Liberals is up 3.6 percentage points from a week ago and it has continued to rise after the long weekend, which pollsters had said would be a key moment for Canadians to solidify their voting intentions after discussing politics with family and friends.

In contrast, Conservative support has slipped 2.2 percentage points to 29.4 per cent over the past week. The NDP's downward slide appears to have levelled off. The party now has 23.7 per cent support, down 0.5 percentage points from a week ago. The margin of error for the survey of 1,200 respondents is plus or minus 2.8 percentage points, 19 times out of 20.

The centrepiece of the Liberals' economic plan is a pledge to fund up to $5-billion a year in additional infrastructure spending by running budget deficits over the next three years. In essence, a Trudeau government would borrow more money to pay for such things as roads, bridges, seniors' homes and flood-control systems.

The Liberals argue that now is the time to invest because interest rates are low, the economy is slow and the country badly needs to upgrade aging infrastructure.

The downside is that the federal budget, now balanced, would return to deficit. The Liberals acknowledge they would run "modest" deficits of nearly $10-billion in the first two years, and then return to balance in 2019-20. While the extra spending would add to the federal debt load, Mr. Trudeau insists a growing economy will keep the debt-to-GDP – a key measure of the government's ability to manage debt – on a downward trajectory.

But critics say the money wouldn't come fast enough to lift the economy, would plunge Ottawa back into chronic deficits and will make future tax cuts less likely. There are also worries that money would be wasted on poorly conceived projects, including what the Liberals loosely define as "social" and "green" infrastructure.

Yet, there are plenty of sound reasons for governments to invest in infrastructure. Every dollar invested in roads or bridges typically has a multiplier effect, generating more than that in economic growth.

And most economists agree that Ottawa can afford to borrow and spend more, at least in the short term. A deficit of roughly $10-billion represents just 3 per cent of the federal budget and 0.5 per cent of GDP.

Liberal campaign ads regularly feature Mr. Trudeau promising to raise taxes on the top 1 per cent to cut taxes for the middle class. In practice, this would mean a new federal tax bracket of 33 per cent on income above $200,000, up from 29 per cent.

The cut would be on income earned between $44,701 and $89,401, which would drop from 22 per cent to 20.5 per cent. This would also benefit Canadians who earn more than $89,401, but Mr. Trudeau has declined to answer questions as to how he defined the term middle class.

The Liberals argue these two changes will be revenue neutral. The tax hike would raise $3-billion in federal revenue and the cut would reduce revenue by $3-billion. Critics have cautioned that tax-the-rich policies have a history of failing to raise as much money as expected.

Britain adopted a similar tax hike in 2010, but later reversed it in 2012. A government report said "the underlying behavioural response was greater than estimated," meaning high-income taxpayers found creative ways to avoid paying the higher tax.

The Liberals acknowledge this could be a problem. The platform includes a reduction of $600-million a year in expected revenue as a "prudence" measure to cover tax avoidance, but there are questions as to whether that adjustment is enough. The party also promises to boost tax enforcement.

Some economists have expressed concern with the psychological effect of a higher-than-50 per cent combined federal-provincial top income-tax rate, which is a measure used for international tax-competitiveness comparisons.

With a new higher federal bracket, the combined top tax rate would climb to 58.75 per cent in New Brunswick, 54 per cent in Nova Scotia, 53.53 in Ontario and 53.3 per cent in Quebec.

One of the most obvious flaws of the Liberal economic plan is that some key initiatives aren't fully priced out, or require negotiating with provinces and territories, which seldom agree on anything.

The most obvious example is the promise to create "a strong and stable" pension program. An improved Canada Pension Plan is a worthy goal, given that many Canadians don't have workplace pensions or enough savings to maintain their current standard of living when they quit working. Yet, experts disagree on whether an across-the-board increase is needed or something more targeted.

There are scant details in the Liberal platform. The presumption is that an "enhanced" CPP would be paid for via higher employee and employer contributions. A similar plan proposed in Ontario has been sharply criticized by business groups and the federal Conservatives as a job-killing payroll tax. Ontario Premier Kathleen Wynne now says she would drop her plan, slated to begin in 2017, if a federal government led by Mr. Trudeau pursued a national plan.

Perhaps the largest hole in the Liberal economic plan involves how Ottawa would pay for promised health-care improvements. Here, too, Mr. Trudeau leaves a lot up to the willingness of the provinces to play ball.

A proposal to cut prescription drug costs depends on working with the provinces.

The platform is silent on the larger question of whether a Liberal government would stick to the Conservatives' decision to cap health transfers to the provinces at the rate of economic growth. Health costs, which gobble up roughly half of provincial spending, are rising at roughly three times the rate of economic growth now, and the provinces will eventually look to Ottawa for more.

Similarly, climate change will be one of the most immediate policy concerns for whoever becomes prime minister after Oct. 19, given that world leaders will meet in Paris in early December for a key United Nations conference on reducing greenhouse-gas emissions.

Unlike the Conservatives and the NDP, the Liberals have not said what targets they would propose at the conference. Mr. Trudeau said he would propose a plan and targets based on consultations with the provinces that build on policies that they are already pursuing to put a price on carbon emissions.

Working with the NDP

Should the Liberals form a minority government, they would most likely require the support of the NDP to win confidence votes. The NDP will expect to see some of its policies implemented in exchange.

The economic platforms of the two parties have significant overlap in terms of priorities, such as expanding the Canada Pension Plan, maintaining the age for qualifying for Old Age Security at 65, cutting the small-business tax rate from 11 per cent to 9 per cent, spending more on infrastructure and working with the provinces on a more aggressive approach to climate change.

One of the most challenging points of difference would be on trade. NDP Leader Tom Mulcair is highly critical of the Trans-Pacific Partnership trade deal, while Mr. Trudeau has said his party is pro-trade and would submit the deal to a vote in Parliament. 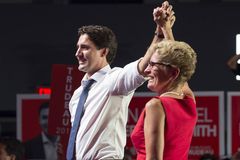 Which party is ahead in the battle for eyes and minds?
October 15, 2015 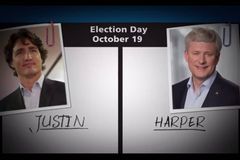