There's an endearing old Yiddish exclamation that goes, "If my zaidie were alive today, he'd turn over in his grave." It occurred to me last week that had Martin Luther King been alive during the 50th anniversary commemoration of his "I Have A Dream" speech, that's exactly what he'd have been doing. Dr. King would surely have been confounded by the record of Barack Obama, whose presidency would have been unthinkable without King and who paid King a lengthy tribute at the commemoration despite his hectic schedule.

Yet every Tuesday in Washington, D.C. – Terror Tuesday, as it's quaintly called – the President chooses his weekly "kill lists," personally approving the latest Muslim victims somewhere that he'll eliminate with a drone. Mr. Obama was also last week frantically preparing his attack on Syria. Since Dr. King believed the American government to be, in his words, "The greatest purveyor of violence in the world", and since, like him, the President had won the Nobel Peace Prize, the young preacher might have turned over and sighed wearily.

King had three great objectives: human equality, social justice and peace. President Obama's 28-minute 35-second speech at the Lincoln monument had two parts. One was very brief. In it, he called the United States "the greatest nation on earth."

The other 28 minutes and 25 seconds was pretty well a comprehensive record of America's failure to come even close to meeting any of King's objectives or to being the greatest nation on earth. Sure, there's been some real progress in the past 50 years that was duly celebrated. But for the most part the President's speech, like those of most of the speakers, was a stark description of the way America has been the opposite of a great nation, especially for huge numbers of African Americans, Hispanics, immigrants, the poor of every race, the unemployed, the underemployed, the underpaid.

The sad fact is that in the half-century since the original March on Washington, and especially after Martin Luther King's murder five years later, just about all Americans with real power have been busy revering his memory while betraying every principle he ever stood for.

This truth, alas, very much includes Barack Obama. It was jarring listening to the President orate at the Lincoln Monument, transparently trying to channel Dr. King with ringing biblical-style cadences, even carefully dropping the g's every time he intoned "marchin'". But given America's distance still from anything remotely approaching equality, social justice and peace, you really had to wonder what part of Dr. King's dream, health care aside, President Obama had actually been working on since becoming president.

We can be pretty confident that King would have been aghast at the vast inequality that characterizes America today; disconsolate at the thousand ways in which racism still plagues black America; distressed by the neoliberal economic advisers with whom Obama has surrounded himself; startled by the corporate lobbyists who have so much influence in the White House; and shocked that the President's defence budget is a mind-boggling $660-billion a year. Not to belabour all those killer drones needed for Terror Tuesday or the fact that it's easier to buy a gun in America these days than it is to vote.

Given King's passionate opposition to American aggression in Vietnam, we can be pretty sure what he'd have thought of the multiple American aggressions since he was murdered, from Cambodia to Nicaragua to Panama to Afghanistan to Grenada to Iraq. So he might be spinning once more at proposition that a righteous America is somehow entitled to punish the president of Syria for his transgressions.

Nor would King have quite understood why chemical warfare that killed perhaps a thousand Syrians was worse than conventional weapons that killed 100,000 of them, nor why the US, the country that drenched the Vietnamese people with chemicals and has yet to pay any compensation, the country that once enabled that old tyrant Saddam Hussein to attack Iranian troops with chemical weapons, now thinks chemicals must be a red line for other countries.

Dr. King would surely have been bemused as well by the fact that tributes to him were being paid at the commemoration march by the likes of Bill Clinton, who took home $17-million last year for making speeches, while King used to speak day and night, gratis, because he had a message to spread.

R. I. P., Martin. No more turning in your grave. Try again in another half-century. 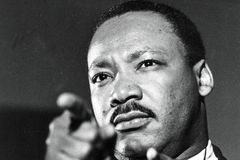