First Nations are facing the election of a new leader of the Assembly of First Nations, one of the biggest players in relations between First Nations and the federal government. They are also deciding what to do about a contentious piece of federal legislation that aims to reform on-reserve education, which helped trigger the resignation of the AFN's last national chief.

Many First Nations people live in the remote places of this country that are being eyed by resource developers. But they are also one of the fastest growing segments of the population and some of the least advantaged members of Canadian society.

Chiefs must answer to a populace, especially the youth, that is growing increasingly frustrated and are demanding a change in the way First Nations deal with governments, industry and other Canadians.

Here's what you need to know.

Who are the First Nations?

The First Nations are the roughly 900,000 indigenous people of Canada that, for centuries after the arrival of Christopher Columbus in 1492, were called “Indians” by people of European descent. They are not the Inuit or the Métis.

They are also the fastest growing population in Canada.

What is the Assembly of First Nations?

The Assembly of First Nations is a national organization created in 1982 to harmonize actions on issues that the First Nations agree are best handled collectively. It is to remain “subordinate” to the First Nations and can only act with their delegated authority. It was modelled on the United Nations General Assembly.

What is the role of the national chief of the AFN?

Who is the national chief now?

Shawn Atleo, the former national chief, resigned unexpectedly on May 2 after supporting legislation called the First Nations Control of First Nations Education Act, which a majority of chiefs opposed. Mr. Atleo, a hereditary chief from British Columbia who was first elected to lead the AFN in 2009, said the reform of on-reserve education was too important and he was “not prepared to be an obstacle to it.” His resignation leaves the executive committee in charge of the AFN.

How will the next national chief be selected?

The national chief is elected to a three-year term at an assembly of chiefs, with each First Nation in Canada getting one vote. The formula means that First Nations with just a couple hundred members carry the same weight in an election as those that have thousands. British Columbia, for instance, is home just 18 per cent of Canada’s First Nations people but nearly a third of all First Nations. So chiefs in that province could skew the vote if they lined up behind one candidate.

Here are the locations of First Nations in Canada: 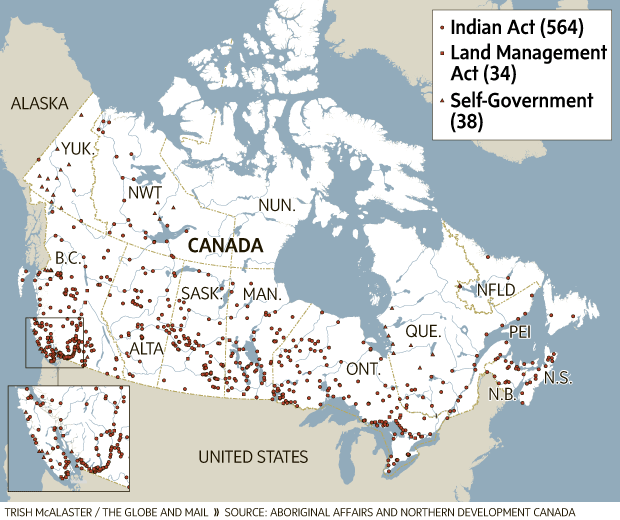 But British Columbia would need at least one other region to back a B.C. candidate this time. After the resignation of Mr. Atleo, many chiefs outside B.C. say the next leader of the AFN should come from somewhere else. B.C. is different to other provinces in that most of its First Nations do not have treaties, while the majority in the rest of Canada do. Honouring of treaties is a key issue for treaty nations. And there is a tradition of alternating national chiefs between B.C. and the rest of Canada.

When will the new national chief be elected?

Chiefs might pick the date and the place of the vote at an annual general meeting in Halifax. There is some discussion about holding the vote in September in Winnipeg, or in December when another assembly has already been scheduled. It could be also delayed a full year, to July 2015. Or the chiefs could pick an entirely different place and date.

It is an act to reform on-reserve education that was tabled by the Conservative government in April. It would create a joint council of as many as nine education professionals who would be appointed on the recommendation of the Minister of Aboriginal Affairs to oversee education on reserve and help write regulations.

The First Nations say it would actually increase government control over the education of their children – something that falls within their jurisdiction according to treaties and the UN declaration on indigenous rights.

The government says the bill is currently "on hold," pending further talks with the AFN.

How much money is on the table?

Chiefs say the money provided by Ottawa for reserve schools has been falling behind that given to schools that are funded by the provinces every year since 1996 when increases for First Nations education were capped at 2 per cent annually.

On Feb. 7, Prime Minister Stephen Harper was joined by Mr. Atleo to announce that the government would provide an additional $1.9-billion for First Nations education. But that money would be spread over multiple years and most of it would not start to flow until after 2016. Some chiefs argue that other areas of reserve funding are being cut to pay for it.

What have the chiefs decided about education?

The chiefs and the delegates who attended a general assembly held the last week of May voted in favour of a resolution rejecting the First Nations Control of First Nations Education Act and calling on the government to instead negotiate a simple fiscal transfer to pay for on-reserve schools. A body within the AFN called the Confederacy wants to establish a group that would take control of the education portfolio and continue negotiations with the government.

What is a Confederacy of First Nations?

It is the governing body of the Assembly of First Nations between national assemblies. It is made up of one representative for every region and one representative for every 10,000 First Nations people. The Confederacy meeting held this month was the first of its kind in 10 years. It is a powerful body which was set up to deal with matters of emergency and to ensure that actions of the AFN, including that of the national chief, conform with the decisions of the chiefs in assembly.

Aboriginal Affairs Minister Bernard Valcourt told the House of Commons that MPs should “condemn, in the strongest of terms, the threats of those rogue chiefs who are threatening the security of Canadians, their families and taxpayers.”

First Nations were not happy about that response. The Ontario chiefs called his comments “slanderous.” One chief from Northern Ontario said she felt his statements were “direct attacks” and that she would not be “criminalized” for asserting her treaty rights. And Bill Erasmus, the AFN Regional Chief for the Northwest Territories, wrote to the minister saying the statement “causes great concern.”

Why is education such a hot-button concern for the First Nations?

They, like the rest of Canada, realize their children are not being well-served by the state of education on reserves. Most chiefs attribute the problems of their schools to a disparity of funding between what their communities receive from Ottawa and what other schools receive from their respective provinces. But First Nations leaders say the right to control the way their children are educated strikes at the core of their right to self-determination and sovereignty that is supported by the UN resolution on the rights of indigenous people.