As I wait anxiously for tonight's results for the NDP, my mind tries to conjure with the role of the party in the Canadian imagination. Until these past four years with the NDP as Official Opposition, not since the Second World War have Canadians seriously considered the CCF or NDP as a potential Canadian government. Yet the party has long held a distinct, positive role in the Canadian psyche.

Failing to come close to winning government, both the CCF and the NDP gladly dubbed themselves the conscience of Canada for much of their existence. Both could point to many achievements to support that claim. More unexpectedly, many Canadians agreed with this assessment. On the one hand, the majority never accepted a left-wing/social democratic/democratic socialist party (in practice, the terms are different only in emphasis) as a serious contender for the government of Canada. That was beyond what Canada's political culture could tolerate.

On the other hand, polls showed that even many Canadians who would never vote for the NDP appreciated its role in public life.

Three qualities were most valued: First, you could rely on the NDP to stand up for average Canadians, and not for privileged corporate interests.

Second, the NDP had a core set of convictions and wouldn't surrender them for political advantage; see the War Measures Act and the niqab.

Third, Canadians could count on the NDP to "keep the other guys honest," as the phrase invariably went.

Whether the party played a significant role in their region or not, Canadians everywhere agreed on these qualities and respected the NDP for them. That's perhaps why electing CCF-NDP governments in several provinces was permissible. But until the past four years, a federal NDP government was a bridge much too far to contemplate seriously.

Perhaps it was this respect for the NDP that led to so much positive feeling in Ontario in 1990 after the party's shocking election sweep. Beyond the unlikely fact of winning, what was most remarkable, it's always seemed to me, was how much pleasure the victory seemed to give most of the province. In truth, the NDP took only 37.6 per cent of the votes; the huge victory came because it won almost all the splits. Yet even many of those who voted against the NDP seemed to get pleasure from the upset. The honeymoon lasted for months and, as public opinion polls showed, encompassed a large majority of the province. With only a few exceptions, even Bay Street was, initially, relaxed about the new government. Many business guys kidded about it. The best joke that made the rounds featured a tycoon who reassures his plutocratic pals that he has lots of influence with the new Bob Rae government. "Hell," he says, "my cleaning lady's the new minister of Finance."

Of course, as the consequences of the recession became palpable, this thrilling but brief era of good feelings soon came to a crashing end.

I believe we saw the same initial phenomenon at work in the days and weeks after Premier Rachel Notley swept Alberta for the NDP. There was an unmistakable if not quite unanimous glow of pleasure from all corners of the province and indeed the entire country for Ms. Notley's unimaginable achievement. The media treated her warmly and respectfully, and most of Canada seemed to celebrate, in turn sending the federal party soaring to new heights of support.

I believe the reactions to both the Ontario and Alberta upsets said something heartening about the regard in which the NDP has been generally held.

I would go further and say the same feeling existed over this past summer as the NDP seemed on its way to winning this general election. Except for its political opponents, there was a warm acceptance by most Canadians of the prospect of an NDP government under Tom Mulcair. Mr. Mulcair's reputation was sky high, and the party was regarded as a refreshing and needed change for Canada. Many Canadians seemed somewhere between reconciled to and delighted with the prospect of an NDP government.

And yet the NDP's decline in the past three weeks has been received by Canadians with something approaching indifference, if not disrespect. Certainly this has been the media's general reaction. Disrespect for Tom Mulcair. Disrespect for the NDP campaign. Disappointment, I'd say, in the party running as something it has never been. Canadians' admiration for the party is mostly for its integrity and for the role it's played as the country's conscience, not for its position on the deficit.

Sure there's a double standard, but that's the Canadian reality. There's a ceiling to Canadians' regard for the NDP. The party is applauded for its integrity and for keeping the other guys honest. But mainstream political culture still, it seems, can't trust it as a viable national government, even when it repudiates some of its key traditional approaches. I pray I'm wrong. But I fear that's what we'll find in tonight's results.

The final push: How the leaders are spending the last weekend of the election campaign
October 17, 2015
Campaign Notebook: It all comes down to today
October 19, 2015
Unswayed by polls, Mulcair insists NDP is still in the fight
October 18, 2015 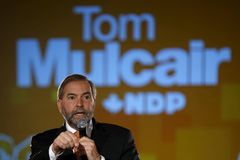