Deepak Obhrai purrs his name into the phone. "It's Deepak," he says, lengthening the vowels for dramatic effect.

The seven-term Conservative MP from Calgary likes to stand out. It's why he sent out an e-mail to supporters in 2011 proclaiming himself the party's elder statesman and the most senior MP of South Asian and African descent – known as Mzee in his birth country of Tanzania.

It's why he wears a rotating collection of 50 or 60 scarves picked up from his travels around the world as the former parliamentary secretary to the minister of foreign affairs — 140 countries and counting, as he's hobnobbed with everyone from David Cameron to Vladimir Putin to Jacob Zuma, although he's lost track of the air miles. "I feel good," he says of his woven accoutrement.

And it's why the 66-year-old has declared his candidacy for leader of the Conservative Party of Canada, when few believed he would.

Mr. Obhrai is now the fifth entrant in the Conservative race, which also includes Ontario MPs Tony Clement, Michael Chong and Kellie Leitch, and Quebec MP Maxime Bernier. The leader will be chosen by party members in May, 2017.

"I feel that I can contribute immensely," says Mr. Obhrai.

Though he likes to point out the fact, Mr. Obhrai insists he's not running for leader simply "because I am the longest serving Conservative member of Parliament," having been first elected as a Reformer in 1997.

He's running because he says he worked hard to open up the party – particularly to new Canadians and immigrants, much like himself.

And he blames the Conservatives' 2015 election campaign with isolating those very groups it should have embraced.

"Many people felt excluded from this party," he says. "I felt it was very necessary that I put my efforts back."

Mr. Obhrai points to his party's positions on the niqab, notably when former prime minister Stephen Harper said the Conservatives would look at banning public servants from wearing them, and the "barbaric cultural practices" tip line as proposals that lead to their election loss last October.

"Nobody bothered asking me whether it was right or wrong. I would have told them absolutely there and then it was wrong," he says.

He is also highly critical of the Conservatives' Bill C-24, which gave the government the power to revoke Canadian citizenship from dual citizens convicted of terrorism. Mr. Obhrai supported the bill's advancement to committee, but abstained from a final vote. The Liberals have since introduced their own bill to repeal this provision.

"That turned out to be an advantage for the Liberals to attack us," he says.

But what an Obhrai-led party would look like is unclear. Mr. Obhrai is considered by insiders to be a bit of a wild card, cited by some as having the unpredictable attributes of a "kooky uncle."

Fiscal responsibility is an underlying theme, but when one asks how he'd unseat a popular Trudeau government, Mr. Obhrai repeats the oft-heard line that the "honeymoon" will end. He swears MPs would have more control than the Prime Minister's Office over their decisions. "This is not going to be [the] PMO running the show," he says.

Mr. Obhrai has enlisted the help of defeated Conservative MP Corneliu Chisu, elected for one term in the eastern Toronto riding of Pickering-Scarborough East in 2011, to manage his campaign.

The Romanian-born Mr. Chisu, a former military engineer who served in Afghanistan, agrees that the Conservatives isolated voters in the last campaign. "They divided and they scared people," he says.

He said Mr. Obhrai's diverse background – he was an air traffic controller in the United Kingdom before moving to Canada, and speaks five languages, with French to be "added soon"– and lengthy experience in Parliament will serve him well. "We will make sure that he will be known also in the European community," Mr. Chisu says.

Former Alberta MP Monte Solberg, who served as immigration minister in 2006, said Mr. Obhrai continues to be well connected across the country.

"He'll provide important communities in Canada with a voice into the Conservative leadership race, and that's important," he says.

Although it's been mused that Mr. Obhrai would support another potential candidate, Peter MacKay, if the former cabinet minister were to join the race, Mr. Obhrai says he is running to win.

"Suffice to say, he and I are very good friends. We have a long history of being together," he says.

Mr. Obhrai says his political motivation comes from his recognition of the chaos that bad governance can cause all over the world.

"Always it is the people who pay the price," he says. "It forms the basis of why I should run." 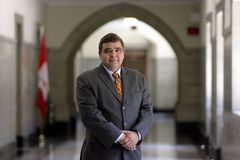 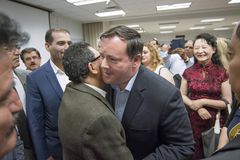 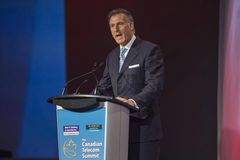 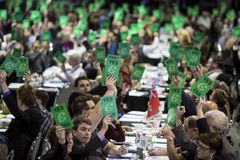