Then last Sunday, two days before the leaders' debate and just as Ontarians were starting to pay closer attention to their provincial election, the Liberals handed the other two parties a gift. Promising to scrap a gas-fired power plant being built in Mississauga, they gave the appearance of panic – undermining the "steady hand at the tiller" pitch the two-term Premier has been making to voters.

Even seasoned political operatives wondered aloud at how the Liberals managed to let a fairly marginal local issue throw them off message for at least a couple of days. The answer is that they were guilty of making faulty assumptions leading up to the campaign, and then weren't willing to live with consequences that would have involved hanging one of their strongest MPPs out to dry.

If the Liberals were going to cave in to residents' protests in Mississauga, the easiest thing politically would have been to do so last year, at the same time they cancelled another planned gas plant in neighbouring Oakville. But they didn't think they needed to do so, because it seemed likely the Mississauga plant would die on its own.

According to both Liberal and energy-sector sources, the project was troubled for years. Within government, it was believed that Eastern Power – the company that won a competitive bidding process early in Mr. McGuinty's first term – lacked the financing to get the plant built. So it seemed possible to get out of it, without having to pay a costly settlement, as with Oakville.

Instead, Eastern Power sorted out its financing. And after getting a municipal building permit this past spring, it started putting shovels in the ground.

That development forced the Liberals into an internal debate. Allowing the plant to move forward could cost them Mississauga South, a riding held by Labour Minister Charles Sousa. Conversely, having taken heat for the Oakville cancellation, generating a second story along similar lines could have broader repercussions.

Until last weekend, they seemed to have decided that killing the plant so close to the election wasn't worth the inevitable bad press. Then Mississauga emerged as one of the election's key battlegrounds, and Mr. Sousa's worried calls to campaign headquarters became harder to ignore. So midway through the campaign, the Liberals buckled.

It's a decision they already have good cause to regret.

Coming during a campaign, Sunday's announcement wasn't really a cancellation of the project, so much as a pledge to negotiate out of it if re-elected. As a result, construction on the site continues. That doesn't really do much for Mr. Sousa's fortunes, and if residents grow suspicious about whether the promise meant anything, the clumsy back-track could actually wind up hurting him.

That uncertainty about the plant's future – the Liberals have said it will be "moved" – also adds to the sense that Mr. McGuinty is flying by the seat of his pants. Tim Hudak's Progressive Conservatives have delighted in tossing around some very large guesses about what the about-face will cost, while fear-mongering about where the plant will wind up instead. (The Tories are being somewhat hypocritical on that latter front, since their own energy plans would also require new gas plants to be constructed, but that's not helping the Liberals' cause much.)

Campaign managers for any governing party would attest that, beyond crass political calculations, it requires a degree of cold-bloodedness to turn a deaf ear to a loyal incumbent being hurt by a local controversy.

But much of Mr. McGuinty's political identity, as he noted during Tuesday's debate, revolves around making tough decisions. That was slightly easier to sell before he tried to take the easy way out last weekend. 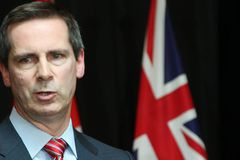 Analysis
McGuinty, Hudak and Horwath answer the what – but not the why
September 28, 2011
Video: Tim Hudak asks why Dalton McGuinty has flip-flopped on the Mississauga power plant issue
September 25, 2011
Follow Adam Radwanski on Twitter @aradwanski
Report an error Editorial code of conduct
Due to technical reasons, we have temporarily removed commenting from our articles. We hope to have this fixed soon. Thank you for your patience. If you are looking to give feedback on our new site, please send it along to feedback@globeandmail.com. If you want to write a letter to the editor, please forward to letters@globeandmail.com.
Comments