For a fleeting moment earlier this week, it appeared Andrea Horwath had finally set a make-or-break condition for supporting Dwight Duncan's budget.

With Tuesday's call to apply an extra tax to anyone making more than $500,000 per year, the Ontario NDP Leader served up the kind of attention-grabber from which it's difficult to back away – and that, if rejected by Dalton McGuinty's Liberals, could make for an NDP-friendly wedge issue during a provincial election.

And yet, no sooner had Ms. Horwath gone public with her demand than she was once again reminding journalists that she has no intention of drawing "lines in the sand." The implication was that she'll be satisfied if the Liberals instead grant a few other, less showy concessions from the list of requests she's slowly rolling out.

It was the latest signal that, against the advice of some of the more hawkish members of her party, Ms. Horwath is determined to play the long game.

If she were primarily concerned with the here and now, Ms. Horwath would be leaning toward helping Tim Hudak's Progressive Conservatives bring down Mr. McGuinty's minority government.

Doing so would carry less risk for the NDP than for the Tories, who are still going through a behind-the-scenes shakeup that has them a long way from election readiness, and have struggled to convincingly explain why they'd force an election over a right-leaning budget. By contrast, the New Democrats could rely on the same campaign team they did a few months ago, and make a coherent case against austerity measures – from social-assistance freezes to the shutdown of northern transit services – that run contrary to their policies and principles.

Meanwhile, there would be considerable short-term upside, because of the potential to pull centre-left voters away from the Liberals. In particular, the NDP would have a good chance of reclaiming some of the union support that has been key to Mr. McGuinty's success, but is now unsettled by the Liberals' purported willingness to legislate wage freezes and take a hard run at benefits.

But while nothing is impossible once a campaign gets rolling, there aren't many New Democrats who think they're on the verge of government. And Ms. Horwath's goal, like Jack Layton's was federally, is to get her party to a point where it's able to compete on the same level as the other major parties.

To do that, she's been trying to craft an image as a different sort of New Democrat. In stark contrast to her old-school predecessor, Howard Hampton, she's positioned herself as a pragmatist who's not beholden to traditional NDP dogma. And she has rather unapologetically traded on her gender to try to draw a contrast between herself and her opponents, whom she portrays as testosterone-heavy boys looking for fights while she's trying to find solutions.

For a variety of reasons – the amount of time it takes to change perceptions, Ms. Horwath's intermittent struggles to sound authoritative on policy matters, an on-the-ground organization that lags behind those of the other two parties – it remains a work in progress.

But lining up alongside Mr. Hudak to force an election just eight months after the last one, then teaming up with organized labour to oppose public-sector belt-tightening that many Ontarians support, would undermine many of Ms. Horwath's efforts to date. And a few extra seats would be small consolation, if the NDP had to start rebranding itself again.

Much better from Ms. Horwath's perspective is to milk the spotlight as much as possible with her various calls for budget changes, take a little media abuse for all the hedging, and then declare victory when the Liberals agree to a few amendments.

That assumes the Liberals actually want her to support the budget. Their party has a few hawks of its own, who see a chance to win back majority government. In the unlikely event that those forces prevail, Ms. Horwath might get so few concessions that she has no choice but to help send Ontarians back to the polls.

But until negotiations begin in earnest next week, her aversion to lines in the sand – and the persona that comes with it – will remain intact.

new
NDP conditions on Ontario budget include tax hike for highest earners
May 8, 2018 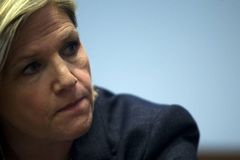 Opinion
Austerity is here. All that matters is the math
May 3, 2018

Horwath slams Liberal 'half measure' on Ontario executive pay
May 8, 2018

Why life in Ontario will be miserable for years to come
April 30, 2018
Tories reject Ontario budget; NDP's Andrea Horwath left as king maker
May 9, 2018