In the realm of politics making strange bedfellows and a week being a long time in politics, such possibility staggers the imagination - and yet is being discussed in the highest political circles of Newfoundland, including the Premier himself.

"If the Prime Minister reached out," Williams told The Globe and Mail, "we would accept any kind of an olive branch."

The Harper government and Williams provincial government have been at a virtual state of war since the Premier charged that the Prime Minister had failed to live up to a signed 2006 campaign promise to exclude non-renewable energy sources from the national equalization formula.

In response, Williams launched his brazen ABC (Anybody But Conservatives) campaign during the 2008 federal election, eliminating any prospects the Harper Conservatives might have had in Williams's Conservative stronghold. The Harper team was shut out of the province's seven federal seats.

"It's not my intention in the next election to go with an ABC plan," Williams said.

A Williams reversal from antagonist to supporter could, theoretically, somewhat alter the coming federal election in favour of the federal Tories.

"If Williams can defeat federal members," says one ranking Newfoundland and Labrador Conservative, "he can get them elected, too, can't he?"

Williams's antagonism toward the Harper government peaked earlier this year when he felt the Jan. 27 budget "targeted" his province and "penalized" Newfoundland and Labrador by denying more than $1-billion that would otherwise have been collected over the coming three years under the deal he believed had been struck.

"I give an elbow," he said at the time. "I don't expect to get a sledgehammer over the head in return."

Nine months later, Williams's new conciliatory attitude is striking, and puzzling to many. He was relative cordial during Harper's last visit to St. John's and says "I bit my tongue" - though not entirely - when he concluded that the Prime Minister had suggested when he believed he could win an election with or without Newfoundland and Labrador.

The feisty Premier is, however, still simmering over federal Finance Minister Jim Flaherty's stimulus budget. "While he was stimulating every other jurisdiction in the country," Williams says, "he took away $1-billion to $1.5-billion. We got cooked. We got $140-million."

But, he says, it's time to change. "I'm trying to get away from that anti-Harper mentality," he says.

"I am saying we are here to work with the federal government at any point in time."

Newfoundland and Labrador sources say Williams will need federal help in his new battle against the expansion plans of Hydro-Québec. The energy giant has recently struck an agreement that could result in a $10-billion deal to gain significant control over New Brunswick Power, and there has been talk of a similar arrangement with Prince Edward Island.

Williams has been very vocal about the New Brunswick arrangement, saying it would place far too much energy clout with Quebec and would effectively usurp any energy sovereignty New Brunswick currently has.

"It's giving away their future," he says.

The deal could also lead to lower comparable hydro rates in Quebec - affecting economic development in the region - as well as significant job loss in New Brunswick and, perhaps, PEI, Williams warns: "The whole idea of merging these is to get efficiencies. This is no different than the merger of large companies."

Williams cautions that in speaking out he is "not intending to be damningly critical of [New Brunswick Premier]Shawn Graham," but thinks it necessary to speak out on behalf of other energy jurisdictions in the country, including Alberta. If Quebec were increasingly to gain leverage over available green and "virtual green" energy sources from the east, he says, in an increasingly environmentally conscious world that could only, in the long run, hurt the Alberta oil sands.

"The federal government should say, 'New Brunswick has a short-term financial problem here, let's help them out,'" says Williams. "That's a lot better situation than they basically give up their energy sovereignty - even though New Brunswickers would deny that, they have in fact given up their sovereignty by handing their regulatory regime over to Quebec.

"It is a dangerous, dangerous situation," he believes. "The majority of Canadians would say 'Let's step in here.'"

Williams has been trying to gain access to Quebec power transmission lines for years without success. He feels the province is deliberately stonewalling to stall Newfoundland's planned development of the Lower Churchill in Labrador. Quebec has had control for decades of the Upper Churchill in a deal that Newfoundlanders have long rued.

Whether the Harper government has any appetite for taking on the Quebec power giant - Hydro-Québec is considered a sacred institution in the province - is a moot point. Since the days when René Lévesque was a minister in the Jean Lesage Liberal government, the power utility has held a sovereignty nuance.

Still, there are those who believe the prospects of a handful of seats in Newfoundland, delivered by a cheering Conservative named Williams - could be enticing to a government that might be a handful short of a majority.

One theory floating about St. John's inner circles is that Harper has an opportunity following the recent retirement of Senator Joan Cook.

The appointment of a very powerful Newfoundland and Labrador Conservative who could be brought into the Harper cabinet and given responsibility for the province has great appeal.

The current minister responsible for Newfoundland and Labrador is Defence Minister Peter MacKay, who is from Nova Scotia.

The one name being bandied about is Loyola Sullivan, who resigned from Williams's cabinet three years ago. Sullivan was considered a superb finance minister and left, the source says, because he found the Premier was a "one-man show." Williams never lost respect for his former minister. When Sullivan left, he said: "Loyola stands shoulder to shoulder with our province's most admired and respected political figures." Put the highly respected Sullivan in the Senate, and the cabinet, the source says, and it would be a two-man show that could work to the advantage of both Williams, the premier, and Harper, the prime minister.

"Loyola could broker the détente," says the source. 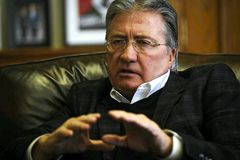 Follow Roy MacGregor on Twitter @RoyMacG
Report an error
Due to technical reasons, we have temporarily removed commenting from our articles. We hope to have this fixed soon. Thank you for your patience. If you are looking to give feedback on our new site, please send it along to feedback@globeandmail.com. If you want to write a letter to the editor, please forward to letters@globeandmail.com.
Comments are closed